Dorset Garden Diary - It's Been a Wild and Stormy Week

Firstly, apologies for the small typeface last week, I hope you all managed to read it ok. I don't know what happened, I think the laptop was having a senior moment!

It's been a bit of a rough ride with the weather this week. Lots of rain and high winds, reaching gale force this weekend. So...it's not been a good week for gardening, but it didn't matter (for me, anyway) as I was away for a few days.

I worked Monday and Tuesday so all I managed was to top up the bird feeders. I think most of the food is being eaten by the magpies and the wood pigeons at the moment. There doesn't seem to be many small birds around in these windy conditions although some of the hanging fruit I put out has been eaten.

Wednesday - the day started dry and sunny for a change and not as windy. I walked round the garden checking that all was ok after the winds...a blackbird sat on the back fence watching me, head cocked to one side with interest. As I was going away for a few days I cleaned the top of the bird table and refreshed the food, fed the fish even though I thought it might be a bit too cold. I came in to make a coffee, went back outside with it and the fish had eaten all the food (not too cold then) so I fed them again just before I left. I planted some radish seedlings in the garden, they seem to sprout up overnight! 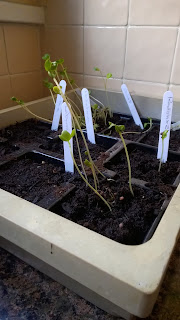 The radishes I planted in the greenhouse are coming on and so is the one lemon - not very big but it's yellow and it hasn't died yet! The daffs are budding and on the verge of opening out.

Saturday - I arrived back early afternoon and the gale force winds were just starting to build up, driving the rain horizontal. I dashed out to check everything was safe in the garden - which it was - and checked that the netting was still undisturbed over the pond...I don't trust that heron. The kale seedlings have broken through 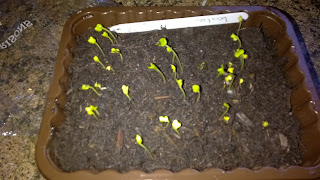 and so have a few of the broccoli 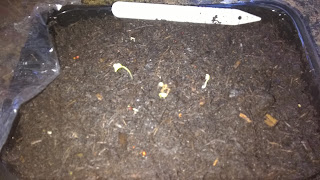 also one red chilli and one cherry tomato seedling. The amaryllis is not only on the verge of breaking into flower but has grown another stem and two more buds: 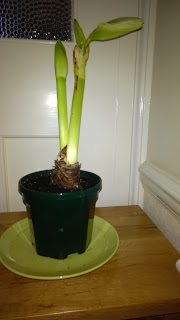 Something had manoeuvred the upturned hanging basket off the robin food so it's back to the drawing board. I'm presuming it must have been a squirrel - could a bird have moved it, it's quite heavy? I will not be beaten!

Sunday - last night was a wild night, woken at 2.40am by hail being blown against the back windows - it sounded like someone was throwing gravel. I checked the garden this morning and the bird table had blown over in the night and the top had come off 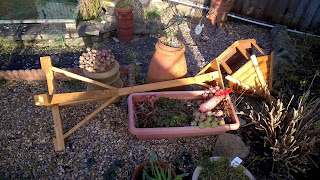 As him indoors is incapacitated after an operation on his foot, it was down to me to set it upright and screw the top back on. I also weighed down the base with bricks...it is now re-stocked and in full working order again; hopefully it will withstand the gales that are forecast. Some of the daffs have come into bloom and the rest are on the verge of opening. 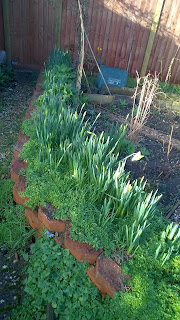 The rose bush, hazelnut, quince, cherry and pear trees have buds on; I peeked under the plastic bin but no sign of the rhubarb yet. In the greenhouse the sweet peas are doing well. 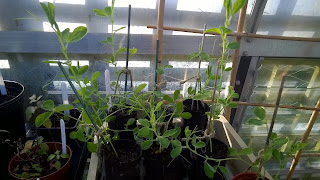 I popped into town this morning and bought some seeds - leeks (lyon 2 prizetaker), carrot (Norfolk giant 2) and also carrot (Amsterdam 2 amice) which are good for growing in containers. March is going to be a very busy planting month! And one more thing...the amaryllis has opened up since yesterday afternoon - beautiful. 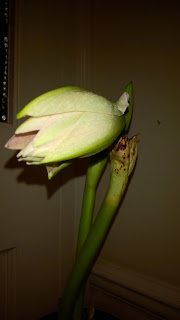 Well, it appears that the gales this weekend were just the warm-up act. Storm Imogen is on her way and, according to the BBC weather map, she's heading straight for my back garden tonight and tomorrow! It's sounding pretty rough out there already and the rain is lashing against the windows. As for the rest of the week, it appears that only Wednesday and Thursday are going to be suitable for gardening. Have a good week...stay safe, dry and warm and catch up next Sunday.
Regards,
DD﻿
Posted by Daisy Digga at 21:14