Well, the roads are busy and the supermarkets are full to bursting with shoppers - it must be nearly Christmas. We've had a few days in Vienna for him indoors' birthday (more of that later).

I did a garden check yesterday as we had an unexpected frost. All is well except that the birds have been removing the tree bark covering pots with bulbs in and pulling them up, so I've pushed them back in and covered the pots again. The fish were swimming near the surface and pounced on the food as soon as it hit the water. I cleared a few leaves from the netting and made sure everything was secure in the garden as we are expecting gales from the tail end of Storm Barbara.

The one thing that did stop me in my tracks - the burrow in the cottage garden is not there anymore. It's been filled in, the area flattened, and still no footprints 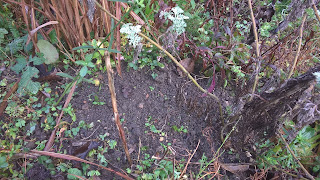 It's like it never existed. Welcome to the twilight zone!

Friday - I had all good intentions of getting out in the garden this afternoon but by the time I got home the rain had started so all I've done today is feed the fish.

Vienna is a delight and I recommend a visit. At first glance the city looks big but it doesn't take as long as it looks on the map to walk to places.  We visited various Christmas markets, there's just so much choice of anything and everything you could want for Christmas plus an inexhaustible supply of calories and gluhwein. 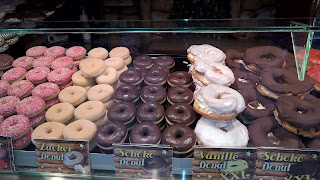 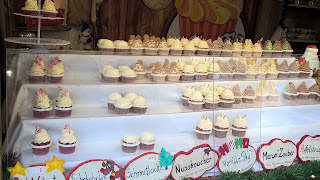 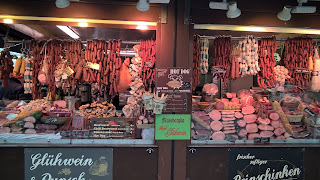 When you buy gluhwein you have to pay a deposit for the cup in case you decide to keep it. These are the best ones we saw for our amaretto gluhwein - cute aren't they. 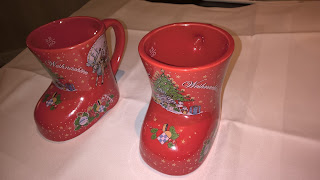 One of the many selections of baubles 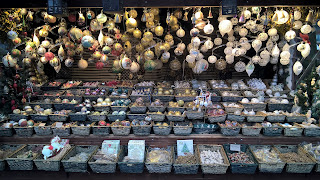 Hanging decorations and mobiles (and no, that's not me)
﻿ 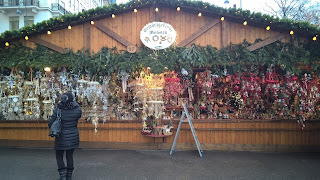 It was much colder than it's been here so we were glad we took plenty of layers. It was just above freezing during the day and well below at night. On our first day exploring we saw this ingenious dress made from pine tree branches 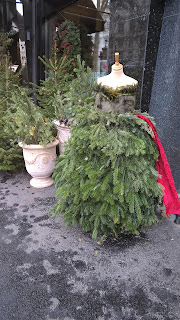 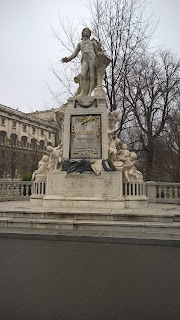 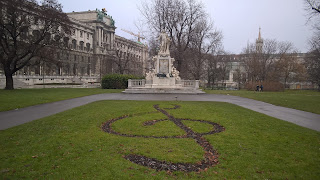 And a definite must to visit - the Mozart Café...amazing strudel 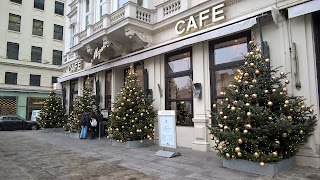 The next day was him indoors' birthday and it snowed all day which is exciting for us Dorset dwellers as we don't often see it. This is the dress 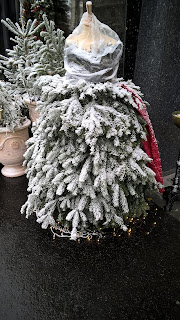 and this is the Mozart statue 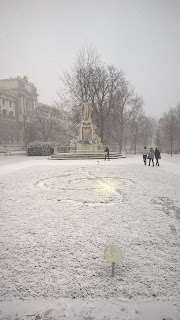 In the evening we went for a walk in Stadt Park which looked magical and just like a Christmas card. 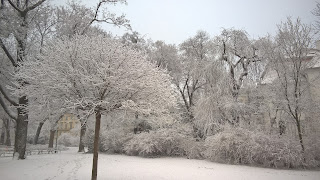 There is a small lake in the middle and all of a sudden the ducks began running down the bank, plunging into the water and swimming towards some overhanging trees where they stopped to gather (they obviously had their own agenda). We also saw a small heron and there were a lot of gulls for somewhere so far inland.

And here is a pic of us in the snow! 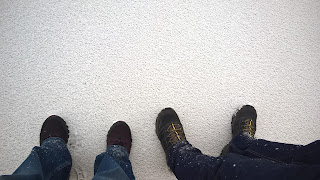 The weather forecast for us here in Dorset over the weekend and into next week is mild and windy so no white Christmas...again.

Anyway, it looks like it's glass of wine time, so enjoy the holidays and catch up next week.