It's been a glorious week in the garden with the warm and sunny weather from last weekend lasting for a few more days before we had some rain. I was away last weekend and was in two minds whether or not to leave the greenhouse door slightly open. I decided not to because it was quite windy, then we had unseasonally high temperatures and I wished I had done. But I gave everything a good soak before I left and thankfully it all survived. The peas and courgettes are coming on well 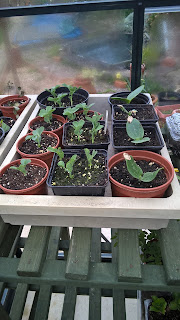 as are the peppers, chillies and tomatoes 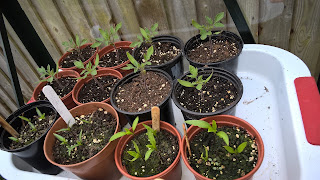 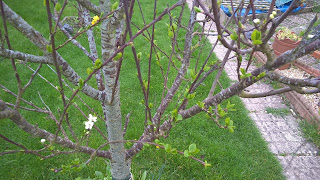 one of the azaleas has come into flower 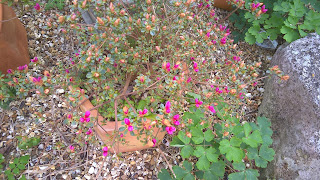 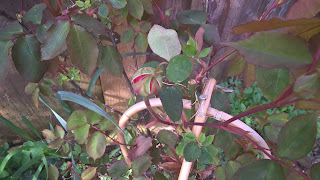 this yellow daisy has appeared in the cottage garden 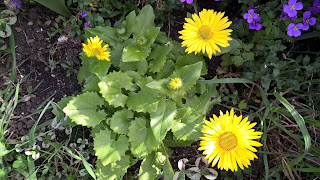 the lilies have started to grow 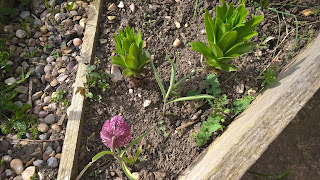 and the pond grass is flowering 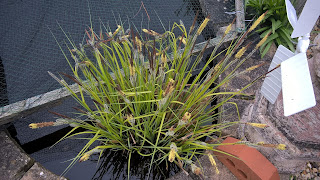 not bad for four days. I gave the greenhouse plants and the outside pots, potatoes and onions a good drink.
Wednesday  - another warm day but cloudier then drizzle in the afternoon. I planted out the blue hydrangea (boogie woogie) in a pot on the patio gravel garden as it prefers part shade and the jasmine which I've put by the greenhouse. I finished dead-heading the daffs for now, I need to do the ones in the front garden next week. I sowed more peas and the three lemon seeds I've been drying. The pottering shed had a long overdue tidy up and I prepared a big tray of peat free compost mixed with perlite ready for sowing seeds next week. No sign of the fish but the surface is still rippling with tadpoles.
Thursday - the younger fish were near the surface this morning. I put a small amount of food in for them but they weren't interested...probably full up with tadpoles!
Friday - rain to start then the sun came out reaching 13C 55F. Windy though. Him indoors fixed the side fence near the top of the garden then started making a netted partition to put over the greenhouse doorway when the door is open so birds don't fly in. He mowed the lawn for the first time this year 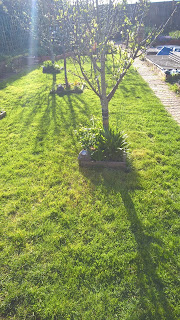 and I made a start on the new look garden area by the pond. It was a gravel bed with pots on it before. We removed the gravel and dug out the weeds - I don't know my own strength! 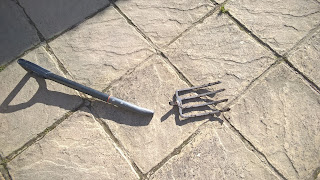 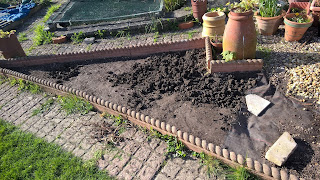 All day we were serenaded by blackbirds - there are a lot of them around this year; the blue tits were in and out of the nesting box and the tadpoles were swimming marathons around the pond. I topped up the bird table and moved it to the top of the garden. Under one of the small trees we have a clump of mock bluebells which I keep trying to dig out but they are down too deep. Anyway, something has flattened the leaves in a semi-circle...very strange 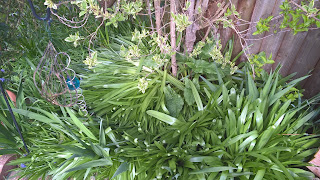 Last job of the day was to pot up the last of the trailing fuchsias and heuchera ivy I've grown from cuttings.
Saturday - it was supposed to rain today with the possibility of thunderstorms. It stayed warm and sunny until 5.30 when we finished for the day then it rained. We had a trip to the local garden centre and stocked up on compost and tomato grow bags and various other things you always see and wonder how you've lived without them! Him indoors put down the weed-proof liner on the new garden then started sifting old soil out of the gravel from the floor of the old greenhouse 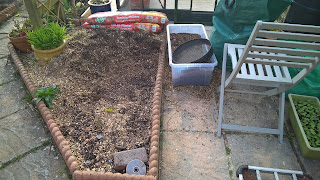 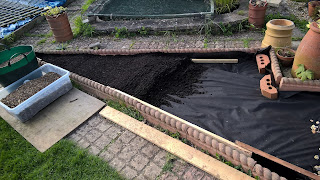 We stopped just after 5pm...time for liquid refreshments!
Sunday - sunny and warm again. Just noticed we have an albino fritillaria 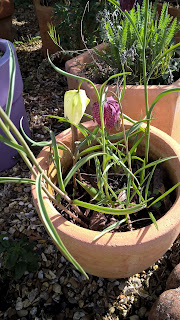 We've had an amazing day in the garden. The temperature in the greenhouse with the door open rose to 21C 70F and it must have been close to that in the garden - we had to have a couple of shandies to cool us down! There were lots of butterflies and fat bumble bees and the birds were singing for most of the day...heaven. The tadpoles were in a feeding frenzy nibbling at algae. The tadpoles in the cauldron pond haven't materialised yet. I pruned the buddleias and the gooseberry bushes. Him indoors lifted the irises from one of the beds next to the greenhouse and replanted them in the top bed near the hazelnut tree. He raked over the soil in the new bed 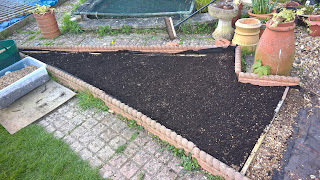 then carried on with sifting the gravel heap. Then...he put it all back again - all clean now 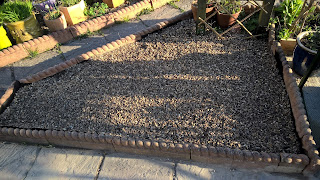 This is where the pots of  herbs and patio fruit bushes will go.
Meanwhile, I emptied the rock garden pots and arranged the plants on the soil before planting. I have put in some perennials for height, iris reticulate bulbs and primroses for spring colour and a festucca grass for texture. Then I spread a couple of inches of gravel over the top. It looks a bit bare at the moment until the plants grow and spread but I'm pleased with the result and our new stepping stones fit in well. 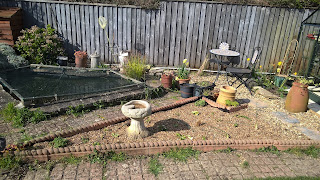 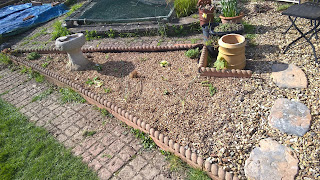 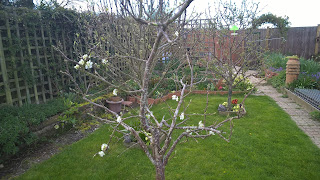 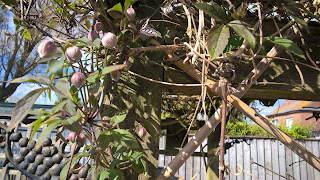 So it's been a good week, we've achieved all we wanted to do and more and now we are nicely shattered! The weather for the week ahead is looking good, maybe slightly colder but no rain. But...the week after looks like it could be getting wintry again unfortunately. Have a good gardening week and enjoy the warm weather. Catch up next Sunday.
Regards,
DD
Follow me on Twitter @DaisyDigga
﻿
Posted by Daisy Digga at 20:28