What's The Best Thing in the World?

Answer: Soaking an aching body in a hot bath after six hours of gardening - at the moment anyway. Although I'm sure the cold glass of something I'm having later will come close!

Anyway...welcome and hope you all had a good week. As usual, lots been happening. Potted up the peppers and chillies. Potted on four seedlings labelled 'tomato' but they definitely aren't so a lucky dip there then. Also potted on yellow alyssium, parsley and watercress. Had to cover the runner beans, peas, squash and courgettes with fleece Monday and Tuesday nights as temperature nearly down to freezing and I didn't want to lose anything.

On Tuesday I started a fresh batch of mustard and cress and some radish and coriander micro seeds. All but the coriander growing swiftly.  I bought some aquatic compost, planting pots and hessian to re-pot the pond plants which I did this afternoon. Tentatively, I removed the plants from the pond in case their was anything lurking in them a) to give it a chance to get back into the pond and b) to stop me screaming if something appeared as I was re-potting! The smell was, well, let's just say don't know how long I'll have to keep the potting shed door open for. Did the first one and lowered it back into the pond, went to start the other one and thought 'now where did I put that other pot, it was here'. Yes, it was, but now it was in the pond underneath the other pot. Note to self - separate pots before planting. So I had to go and retrieve it from the pond. As I tried to separate them the plant fell out! Both plants now re-potted and back in pond.

There has been a lot of activity in the pond this week, all frog related. I'm starting to wonder if the fish have moved ponds. There are loads of tiny frogs that are getting braver each day. I spent quite a bit of time this week trying take pics but as soon as I approached the pond they all dived for cover - I didn't realise I was that scary! Anyway, I did manage to catch one sunbathing on the lily bud, 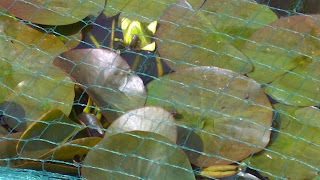 hope you can see it. Late yesterday afternoon I sat by the pond enjoying a well earned refreshment and a tiny frog came a'hopping and a'skipping along the path by the pond, definitely not looking where it was going as it bumped into all sorts and ended up on it's back a few times. I kept my eye on it as I didn't want to tread on it. It disappeared, then a few minutes later came hoppity hop back down the path again...fascinating and a joy to watch. A little froglet is in the cauldron now as well as Freddie/Freda.
On Wednesday I decided to sow more fennel and carrots as no sign of the previous batch growing. And I also decided to cover them with a polytunnel in the hope they might actually grow. Another note to self - do not assemble and erect a polytunnel outside on a windy day; over an hour later... All I can say is thank goodness for tent pegs (amazing I have tent pegs but never go camping lol).
There is a very friendly and, quite frankly, very forward, blackbird in the garden. He sings to me from the fence, he walks along the paths and across the patio and, for some reason, seems to think he belongs in my kitchen. Three times this week I've had to shut the door as he was heading for indoors.
It's also a week of loss; three courgettes gone although I think it was probably me over-watering them and, unfortunately, after the garlic rust I was unable to save the crop - nothing. Thankfully the onions and leeks are doing really well. The onion leaves are starting to yellow and wilt so won't be long now. More flowers on the potato plants but...not on all of the plants in the same growing bag so, do I harvest the flowering ones at the risk of disturbing the others or do I leave them until the rest have flowered?
Thursday into Friday we finally had some heavy, steady rain which topped up the butts nicely and saved me having to water for a few days. And after the rain, two flowers appeared on the squash in the garden, the one in a pot has yet to flower.
Yesterday I got up early and went to B&Q to get some more courgette plants in case all mine failed but there weren't any left. I also wanted some begonias but I think it's too early (not 8.30am but too early in the year!). I then went to Morrisons for a few bits and also came away with some plants as they have a good deal at the moment so I bought cottage garden perenials Chiastophyllum Oppositifolium and Manorda Red Shades, and wildlife garden perennials Eupatarium Maculatum Pink and Palemonium Caeruleum (Jacobs Ladder) - two for £3.  When I got back I started clearing the top of the garden as we are having a new fence along the back plus I need to clear the intended shrub/cottage garden bed. Four hours later I found one of the rhubarb I planted last autumn so glad that's coming on. Also, since last year there is now cow parsley and lots of clover in the garden (and in the lawn - clover not cow parsley). I think it must have blown in from the fields on the high winds we've been having. I'm glad about the clover as the bees love it. Also, cornflowers seem to have seeded and are growing everywhere. I have to say, although it was back-breaking work, it does look much better.
I checked the fruit trees; there are some cherries developing, no plums as yet this year, still no apples (none last year) and three pears - two more than last year so result!!
Well, I think that's all for this week. If I sit here for much longer I won't be able to move. Have a good week.
Regards,
DD
This morning I woke at 3.30am thinking I have to move the digitalis I planted yesterday as I want to put the cucamelon there and then that was it, my brain took over planning. I did manage to fall asleep around 5am but felt worse for it - I should have got up.﻿
Posted by Daisy Digga at 18:10