After our brief spell of winter over the past week we are now back to milder conditions. The temperature today is over ten degrees higher than it was at the beginning of the week.

Monday - there was no frost but it was bitterly cold in the wind. I was in the dining room getting ready to go out when something caught my eye in the garden. I looked out to see a heron land on one of the side fences. I grabbed my phone and took a quick picture then went into the conservatory to get a closer shot but it flew away. I don't think it will be catching any fish in this weather, they're all in the warmer water at the bottom of the pond...hopefully! Amazing to see it though, they are beautiful, graceful birds...just a shame they eat fish! I hope you can make it out just above the washing line - it does blend in so well with the surroundings. 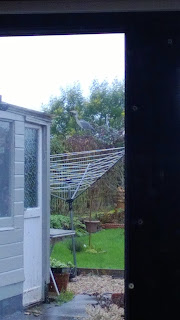 Tuesday - a frosty start, another cold day and another stunning sunrise. I was sat in the conservatory having breakfast when it occurred to me that the winter jasmine isn't in flower - the trellis should be covered in yellow flowers. So...it appears that the plants that are supposed to be flowering aren't and the plants that aren't supposed to be flowering are!

The pond was frozen again this morning so I gently poured a little hot water on to melt some of the ice. The pigeons were eating the robin food so I have put an upturned, empty hanging basket over it. Unfortunately the pigeons could still get to the food, so him indoors has raised it up on a block so the robin's can feed but the pigeons can't. 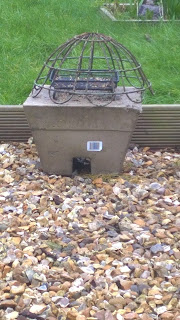 I assembled the new feeder station without too much difficulty, put it in the garden and hung suet blocks and a seed feeder on it. 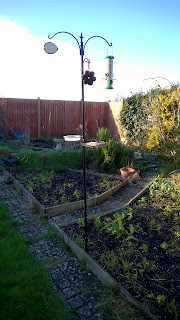 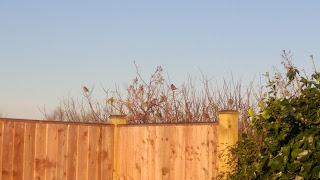 A friend came over and we sat in the conservatory having tea and cake. We not only saw a blue tit on the suet blocks but another one spent about 10 minutes checking out the nesting box near the greenhouse. I hope it's the same pair that have come back again. I then made the nesting material balls and hung them around the garden...they look like aliens! 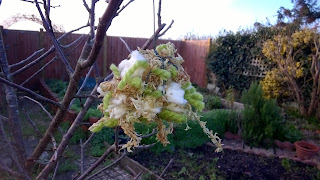 Wednesday - crystal clear sky, amazing sunrise and a hard frost. The pond was frozen over again so I went out with the kettle and the hot water just ran over the top of the ice without penetrating it. First thing there were no birds in the garden, not even the pigeons, then a bit later four blackbirds were flitting about for a while. A pigeon came down late morning and headed for the robin feeder and walked round it, trying to get to the food. I had some small salad potatoes left over from Christmas that had started to sprout so I have put them in an empty egg box in the shed for chitting (this is where the knobbly roots develop so they will grow quicker once in the soil). No idea what type they are but I hope they take and grow.

Thursday - slightly warmer today but cloudy. We bought a lovely bird table which looks great in the garden. I put sunflower hearts, black sunflower seeds, mixed bird seed and mealworm suet nibbles on it...will be interesting to see what it attracts. That was all we had time for today. 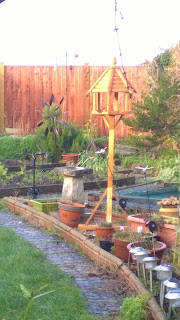 Friday - I fed the fish this morning as the weather is getting warmer. They didn't appear immediately, but later in the day I noticed that the food had gone. Also, the netting over the pond had dipped into the pond...I'm hoping it was just from the torrential rain we had overnight.  Him indoors put quite a bit of composting material in the bin at the back of the garden which is now full up, so is the one by the top shed and the tumbler composter isn't far off. He also moved both the bird feeding station and the bird table to better positions. The food is being eaten which is a good sign. He then re-sited the robin box as it appears we had it in the wrong position. It is now much lower and partly hidden by vegetation. We were serenaded with birdsong whilst we worked.

Saturday - the day started bright and sunny then cloud began to develop late morning and the wind picked up. I didn't get much done in the garden but I did sort through my packets of seeds to make sure they were all in date then sorted them into sowing order. I also made notes on what to do in the garden next month. I watered the greenhouse plants - the sweet peas have finally stopped mimicking triffids. The pots of cuttings are coming along nicely.

Sunday - there were no birds in the garden for a while again this morning...strange. As I said earlier, the temperature has risen steeply so fed the fish again and they were straight on it. In fact, I fed them twice today as they were on the surface - here's two of them...there was a larger fish on the other side but it dived before I could take a pic. 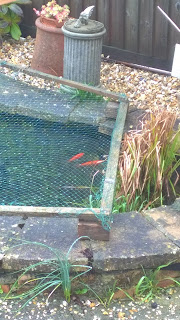 There are a lot of fishlings and it didn't take them long to devour the food. There were quite a few midges flying around late morning. I then retrieved the propagator from the greenhouse and cleaned it (every time I walk by I get a faint whiff of curry from the curry plant!) Whilst I was pottering about, a robin and a sparrow were feeding from the feeder. I have sown:- micro radish, garden radish, chives, basil, red and green chillies, hot red chillies, razzmatazz peppers, sweet mini peppers, cucumber, 2 types of tomato, cerinthe, antirrhinum and some laburnum seeds. I then moved a few things about in the kitchen and set up my seed crèche again: 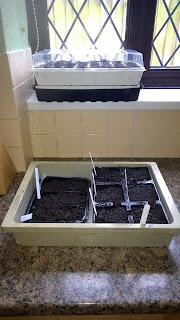 And finally I planted up the hypericum I bought during the week, I will plant this out in the garden in the Spring: 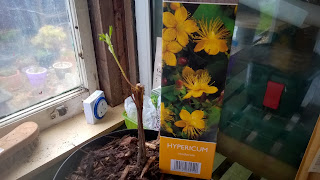 Well that's about it, it's been a busy and satisfying week. I have a list of things to do this coming week so I'm hoping the weather will be kind...although it looks like Tuesday and Wednesday could be washouts. Have a good week, stay warm and dry...
Regards,
DD﻿
Posted by Daisy Digga at 20:42