Dorset Garden Diary - Frog Spawn and the Blue Tits are Back

Hope you've had a good week. The garden is bursting into life despite a couple of chilly days and Storm Doris.

Monday - it was much milder today, cloudy to start then by the afternoon the sun came out and felt quite pleasant. I fed the fish this morning and there was a clump of frog spawn which is good news. Hopefully the fish won't eat it. I popped to the garden centre and bought a few alpines for the new rockery and put them in and added gravel to stop the roots getting waterlogged. All it needs now is to wait for them to grow. 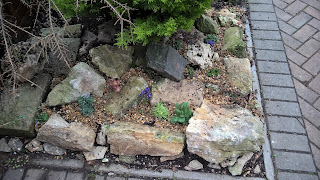 I then spent a couple of hours tidying up the back garden although it doesn't look like I've done much. The iris reticulate and the primroses are looking colourful (and the grass is quite lush, we've deliberately left it long) 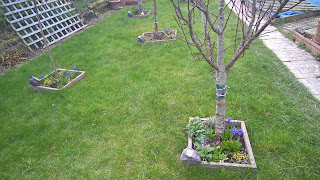 The cress has shot up over the weekend 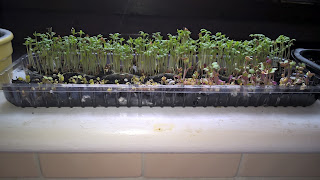 Tuesday - a mild but damp day. I went out to feed the fish and there was more frog spawn - 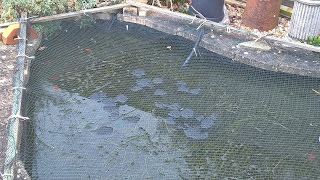 at times the pond surface resembled a Jacuzzi with the frogs splashing around! When I fed the fish at lunchtime one of the frogs leapt up and gulped some of the food, dispersing the fish. I ordered my free perennials (cost of postage only) - 12 x ladybird poppy, 12 x munstead lavender, 12 x Mrs Bradshaw geum and 12 x pink parasol echinacea.

Wednesday - much colder today and windy. The new greenhouse was delivered before 8am this morning and it's being erected next week, hopefully. I went out to feed the fish and check on the frog spawn. I counted seven frogs splashing around and piling on top of each other (I presume they're frogs, they could, of course, be toads) 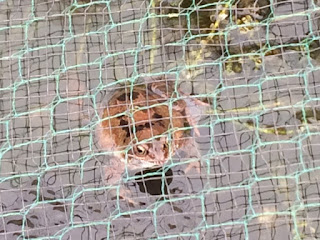 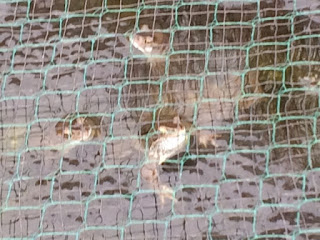 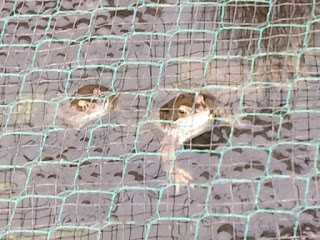 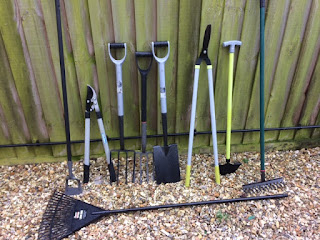 Whilst he was doing that I made a start on tidying up the cottage garden. I cut back some of the grasses and started weeding the beds but it was bitterly cold in the wind so I'll do some more another day. It's looking a bit barren at the moment 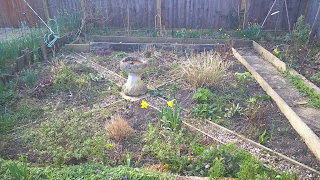 We drove out to one of the local garden centres as I had a voucher for some free potatoes - I chose pentland javelin as they did well last year and I bought sugar snap pea seeds. I can't really do any more sowing (although I'm itching to get started) until the greenhouse is up. Once it's up we can erect the trellis again and not beforetime as the sweet peas are straining at the leash in their pots.

Thursday - Storm Doris hit Dorset today. Although we didn't have it as bad as some of the country it still blew the pottering shed door open and the roof off the pond pump housing. The pond surface is still bubbling with frogs. I adjusted the coverings over the veg beds 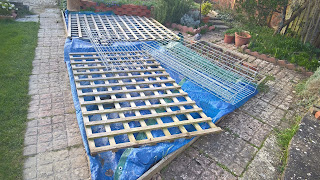 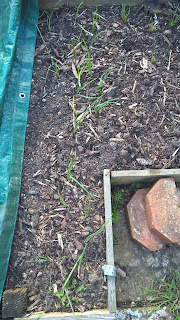 Friday - calm and sunny but colder. Whilst I was sat in the conservatory having breakfast, two blackbirds were re-enacting 'High Noon' on the back fence and the heron swooped past. The pond was calm today and the fish didn't appear interested in food. I cleaned the bird table, re-stocked it and re-adjusted the design slightly so it's easier for the blackbirds to fly on 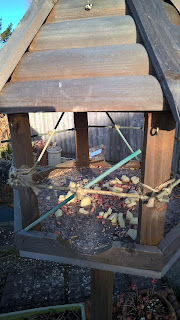 I then put the pentland javelin to chit in the pottering shed. I was going to tidy it up....another day.

Saturday - an exciting moment for me this morning...there is frog spawn in the small cauldron pond (to the left). No sign of a frog, though I'm sure it's camouflaged somewhere nearby 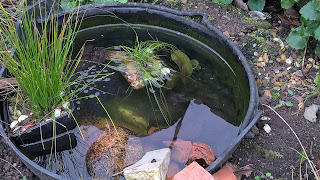 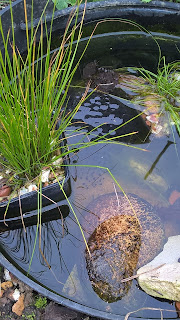 I didn't get any gardening done as it was cold and windy, even the fish were lethargic this morning and the pond surface was still calm. There was a dove enjoying a bath in the birdbath by the patio and two pigeons were rummaging through the pile of gravel from the old greenhouse floor. I went out again at lunchtime to check the pond (it's addictive) and put a little food in for the fish and this time they were like piranhas that hadn't eaten for a week.

Sunday - it supposed to be sunny but keeps drizzling. I fed the fish and again, they weren't really interested. The water is bubbling again with frogs. I watched a pigeon come into land in the garden. Normally, as you know, birds fly horizontally but this pigeon flew in chest first, semi vertical. It was hilarious to watch as it landed ungainly on the lawn. The blackbirds and a robin visited the bird table which I'd topped up and...the blue tits visited the nesting box (yesss!). All is well in Daisy's world again. I checked the propagator and some of the razzmatazz chillies, peppers and tomatoes had surfaced so I re-potted them and put them in him indoors' workshop pending the new greenhouse and also re-potted a few little gem seedlings that have started to grow.

There are still plenty of jobs on my to-do list but they'll have to be carried over to next week, although the weather forecast isn't very gardener-friendly. It's getting colder tomorrow with rain and maybe sleet and snow and possibly thunder and the same on Tuesday but with sunny spells and Wednesday is a total washout. Thursday is the only decent day so, fingers crossed, we can get the greenhouse erected. Hope you have better weather where you are and catch up next Sunday.