Dorset Garden Diary - It's Definitely June and the Garden is Flourishing

Summer has arrived. It hasn't crept up on us, just hit us with a bang, 16-26C (59-78F) in three days. The garden is loving it. I think I have solved the blue tit conundrum...someone told me they have probably laid another clutch of eggs which explains why the adults are still in and out of the nesting box.

Monday - I picked the first raspberries (sweet and tasty) and blackcurrants (sour!). I'm a bit concerned that the Charlotte potato plants aren't flowering as they are due to be dug up soon - the leaves are starting to wilt. I weeded the veg beds then topped up the bird feeders. Every time I walked past the pond the fish surfaced expecting food...I felt guilty and fed them. There were loads of flies hovering just above the water. I picked one of the courgettes although it doesn't look like one 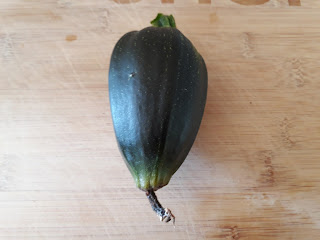 and some flowers for the conservatory 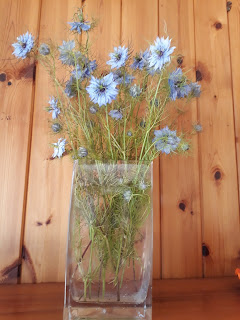 Tuesday - no cloud today and we were treated to an amazing sunrise and a warm day with no wind (for a change). I was by the pond and saw a squirrel on top of the fence. It stopped when it neared the stone cat on top of the pump housing. It looked at it, took a couple of tentative steps, then dashed past. I heard somewhere that squirrels don't like cats. They obviously go by sight because it recognised what it was. I topped up the pond water, filled the bird baths then watered the garden. There was a blackbird sat on the bird table, not eating, just watching me. It stayed there for ages. The pentland javelin potatoes are flourishing 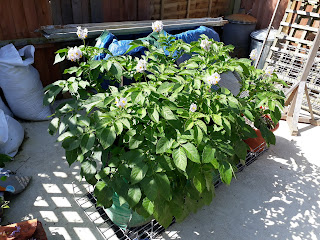 and the cottage garden is filling out 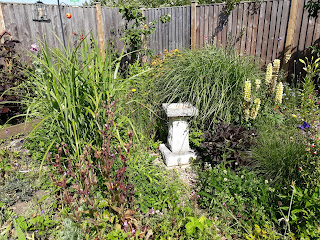 Wednesday - another glorious day with a gentle breeze and a cloudless sky until late afternoon. I pulled up the garlic and hung them to dry 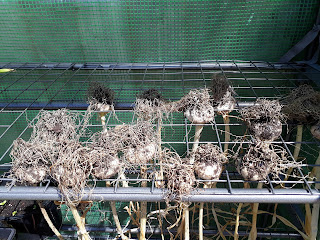 This is my first successful harvest. I planted out spinach and fennel seedlings and put marigolds in the greenhouse near the tomatoes and the rest in the flower beds. I mowed the lawn (not in straight lines like him indoors - oops). There is a lot of clover growing on the lawn again this year so I've left a patch around the pear tree for the bees. Spotted this little ray of  sunshine amongst the ornamental grass 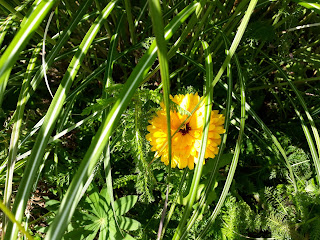 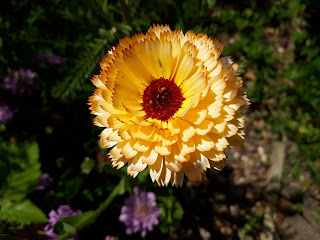 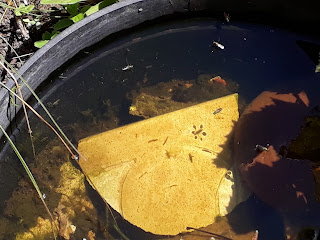 Thursday - at 5.30am we had thick fog. A couple of hours later the wind had cleared it. No gardening today.

Friday - sunny and windy. I fed the fish, replenished the sweet peas indoors, sowed more spring onions and planted out carrots and lettuce. The chantenay carrots are coming along nicely 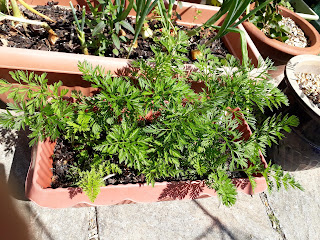 Looks like we're in for a hot weekend if the forecast is correct.

Saturday - sunny, clear blue sky and 20C (68F) at 8.30am. I fed the fish, there were more this morning near the surface. I then noticed that the big one has surfaced and I caught sight of some small black fishlings so I'm pleased about that. I ran the pump for a couple of hours to oxygenate the water. I moved a couple of plants in the cottage garden that had become squashed by the ornamental grass then planted out three hollyhocks (peaches and cream) that I've been given and a fuchsia. I tied up the cucumber plants in the greenhouse - saw this little one forming 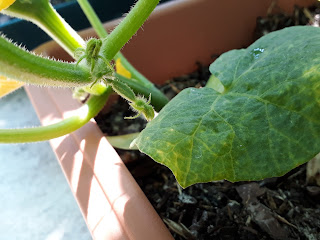 and there's flowers on the pepper plants 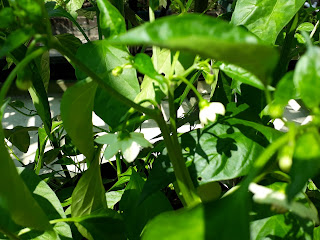 I picked more raspberries and blackcurrants, the blackcurrants are still a bit sour. I gave the garden a  good soaking and filled up the bird baths.

Sunday - 18C (65F) at 6.30 this morning and another scorcher of a day. The fish were on the surface when I went to feed them 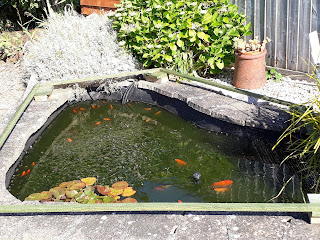 but they didn't seem that interested, maybe it's too hot. The garden was full of sparrows, some were having a bath - you can just about see (I couldn't get any closer without them flying away) 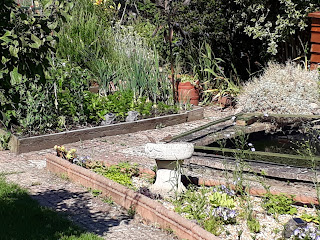 and on the patio an adult was feeding a newly fledged chick. Made my weekend! I had a stroll round the garden as it's too hot to do much work although I did do some weeding. The jasmine is in flower 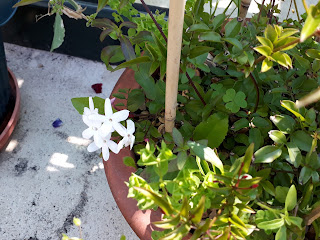 the boogie woogie hydrangea is in full bloom 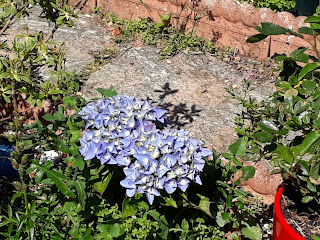 a rather large courgette that is for dinner 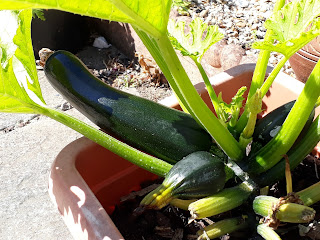 one of the new potentilla I put in earlier this year 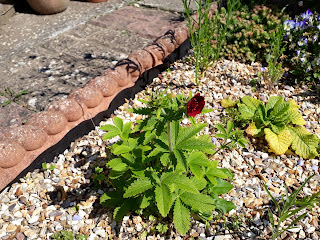 the sweet peas are still stunning 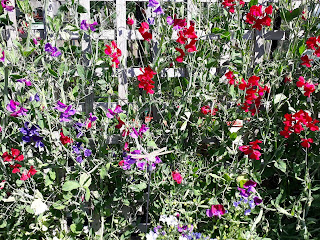 and the lionheart lillies are beginning to flower 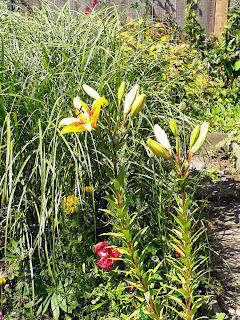 A lot of the fish were on the surface of the pond and weren't moving much which was a bit disconcerting, especially as they hadn't been interested in the food. I put the pump on although the pond is oxygenated and I topped up the water. It was then I saw why - one of the fishes had died. I scooped it out and, after a short while, most of the fish disappeared under water. I'm hoping it's just died of natural causes rather than something being wrong in the pond. I kept checking the pond throughout the day and one of the bigger fish was permanently near the surface which is unusual but when I looked this evening all seemed fine. By the way...it's 8.15pm and the temperature in the greenhouse is 26C 78F! I thought I'd have an hour lying in the sun this afternoon...and a pigeon pooped on my shoulder...thank you!

It's been a busy and diverse week in the garden and we're starting to reap the benefits of our sowings. I watched the Countryfile weather this evening and tomorrow is going to be even hotter then it's going to cool slightly (but not much), maybe some rain and a thunderstorm Wednesday but probably not. Yep...summer's arrived. There won't be a blog next weekend (things to do) so catch up in a fortnight. Enjoy this lovely weather!