Hope you all had a good Christmas.

It's been a mixed end to the year in the garden. We've had sunny days followed by frosty nights (the fish pond froze over a couple of times) 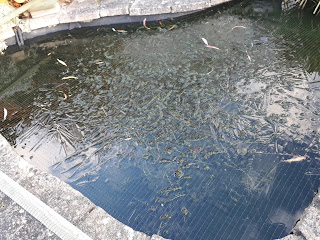 We've had gales that have blown open the door on the pottering shed, accompanied by torrential rain, thunderstorms and mild temperatures. 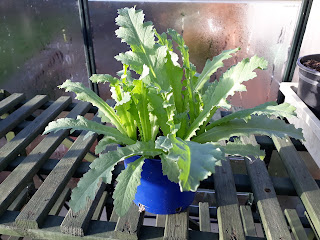 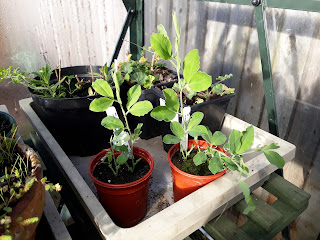 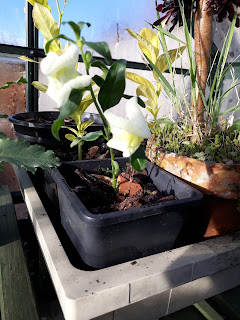 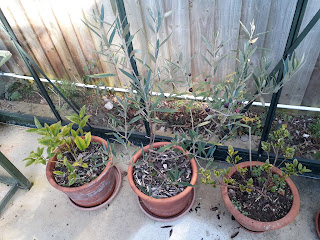 There are flowers in bloom 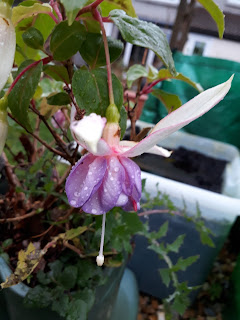 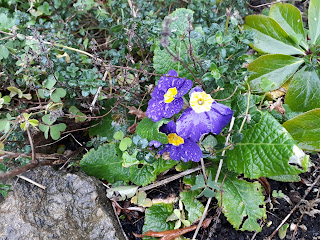 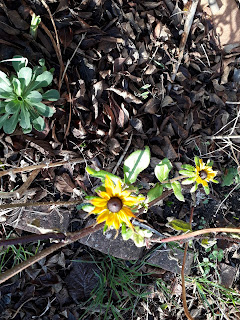 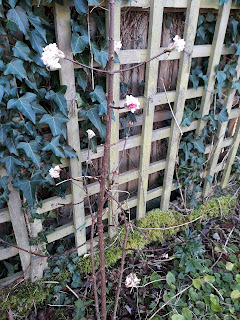 and the grass is very green for this time of the year although we will have to repair some of the patches next year. There are already buds on some of the trees and the bulbs are coming up.

The onions have come on 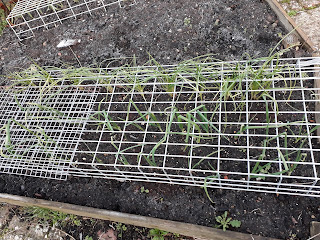 and there is one fennel growing (they didn't grow in the summer!) 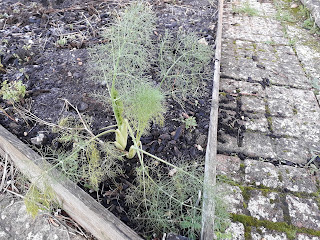 Looking back over the year, the runaway success has to be the potatoes, closely followed by the peas, carrots, tomatoes, garlic and chillies. The disasters were the cucumbers - lots of foliage but only about three decent cucumbers from four plants and, as usual, the courgettes...they just don't seem to like growing here. The pot grown runner and French beans were a disappointment so I'll go back to growing them in the garden next year.  And I dug up the last of the parsnips on Christmas morning for lunch - very tasty but weird shapes (nothing new there then)!

Over the past week him indoors has sorted out the top of the garden and is on his way to the recycling centre with the garden rubbish as we speak. He also emptied some of the compost out of the large bin and moved it so it's easier to get to then cleaned out the blue tits' nesting box ready for their return. I pruned the acer tree and we still have the climbing roses to prune. Over the month I've been digging in coffee grounds into the beds to nourish the soil and regularly topping up the bird feeders which have been visited regularly by the blue tits, sparrows and chaffinches. My intention was to clear out the pottering shed but it hasn't happened yet so that is a job for the new year together with cleaning the pots and digging in the homemade compost.

The fish have semi-hibernated although some of them are surfacing on the milder days. I've been feeding them now and again but they're not really interested. The level of the pond is high due to all the rain we've had and there's more forecast. 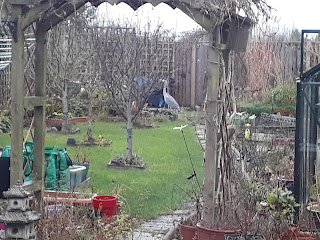 I tried to get a closer shot but it flew away very gracefully. It was wandering around the garden for a few minutes. I know I've said it before but it's a stunning bird and now we have the netting over the pond it's nice to see it in the garden.
Well, that's it for this year and I'm already planning for next year.
Happy New Year to you all and catch up soon.
Regards,
DD
Follow me on Twitter @DaisyDigga﻿