I was spoilt for choice for a title this week but this one sums it up. The first title was going to be 'The Year of the Frog' as the surface of the pond is bubbling with the splashing of extremely large tadpoles - and they are huge and numerous...probably because they keep nibbling at the fish food.  The fish have been a bit elusive this week, obviously sulking because the tadpoles are eating their food! The huge frog, nicknamed Freddie (original!) has not been in the mini pond for a couple of days andI keep waiting for him to jump out at me as I'm weeding.

Another title was going too be 'The Highs and the Lows' as I discovered yesterday that the garlic has garlic rust. I was devastated as it only seems to have taken hold in the last week.  My initial reaction was to pull the plants up (as I had seen a couple of months ago on the TV) but I didn't want to lose the crop so I went on the internet and found a site called gardenbetty.com.  The virus is air borne (it has been extremely windy here this year) and can affect leeks and onions as well. Thankfully, the onions don't appear to have been infected. Anyway, I did as the website advised and stripped all the leaves off just leaving the stems - apparently the plant will still photosynthesise and send goodness to the bulb so we'll see...I'll keep you posted.

It's also been a week of strange discoveries....I found a rogue lettuce growing amongst the primulas, perfectly healthy (must be from last year) so I've repotted it and it's doing nicely. Also, whilst dead heading the daffs I came across what appeared to be leeks. I thought can't be...can it? The stem were certainly thick enough to be leeks and there were seed heads on the top. I pulled one out and yes, it was a leek - goodness knows how they got there, I pulled out six. I won't be eating them but I've saved the seeds. And, further along in the same bed I found parsnip tops growing, again these must be from last year. I pulled them out but the parsnips weren't very well formed.

I think I've gone a bit mad with the beetroot and am overrun with seedlings - good job I like it. The carrot seedlings in the greenhouse have grown about 2" but the ones in the garden are yet to show.  Thanks to the snails I have a sum total of three parsnip seedlings at the moment but a new batch are slowly, and I mean very slowly, sprouting.  The peppers and chillies are also taking their time, may have to sow another batch of these as well. But the cucumbers are doing well and they are now in their growing position in the greenhouse, the gherkins have also sprouted nicely, they are an outdoor type so I am hardening them off along with the courgettes. The Japanese squash are growing very fast but I think these don't go outside until end of May...not sure where I will put these - don't think I've thought this through properly lol! The potatoes have gone totally bonkers and all four varieties ((early and late growers) are all nearly a foot above the top of the potato growing bags. 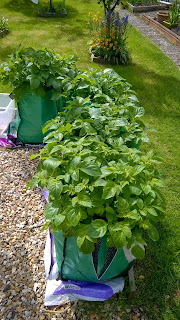 There are lots of pale blue damselflies in the garden at the moment along with various breeds of butterflies and bees. And talking of bees and butterflies ((no, not that sort of talk!) I went to the garden centre this morning to get some more spinach seeds (current batch doing very well and extremely tasty) and I also bought from the wild garden section some red campion, scabious, wild marjoram (which the bees love apparently) and wild basil so I am doing my bit for the environment. Still no bees in the bee box or the two new nesting boxes but the blue tits are very active in the original bird box...if I had a pound for every time they flew in and out of that box every day I would probably be able to retire, it's incredible. I sit in the conservatory every morning with my hot, thickly buttered toast and watch them flying in and out and bombing around the garden. Yesterday morning they were picking off the early morning bugs off the greenhouse.

For a few weeks now I have been diligently filling the bird feeders with peanuts and putting out fat balls but not any more. Why, you ask. Well, yesterday I was sat in the conservatory having lunch (smoked salmon and cucumber Panini) when I saw a fluffy tail strolling down the path then veering off to the right where the feeders are. I abandoned the Panini and crept across the lawn and there was the thief...a grey squirrel hanging off one of the feeders! He was cute though. I've now moved the feeders.

I'm not sure what too do with the morello cherry tree...it had masses of flowers on it and now, of course, it's due to produce masses of cherries. I am wondering whether or not to cover the tree to protect it from the birds, not sure netting will stop them plus they could get caught up, maybe I should try the white fleece material. 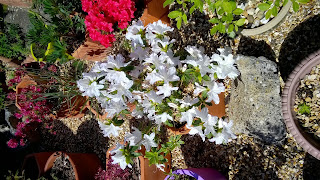 This is the white azalea that I rescued from a garden centre, it was on it's last roots and totally dehydrated and now.... And yes, I know the pic is sideways but  I don't know how to turn it round...I will inquire.

I have a thing about taking pics of trees and whilst on holiday in Mexico recently I came across this...I think it's amazing. It also looks like something out of a sci-fi film! 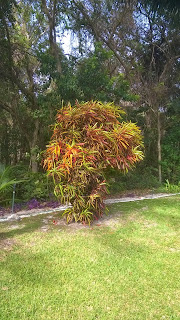 Right, I think that's it. The sun is still shining albeit clouding over and the wind is getting up...but a least the washing's drying!
Have a good week, catch up next weekend,
Regards,
DD﻿
Posted by Daisy Digga at 15:45