Sorry this is late but I was working all weekend. It's been a strange week. Friday morning I went out to feed the fish and the netting over the pond was bowed in the middle and in the water...very puzzling. I don't think it was the heron as a) it would be difficult for it to balance on the netting and b) the holes are too small for the fish. Plus...no fish this morning. I tightened the netting again, still puzzled. I checked the pond later that day and there was one solitary fish lurking in the pond weed...2 hours later it hadn't moved apart from listing slightly to the right...dead fish, I thought glumly. I fetched the fishing net and manoeuvred it under the netting towards the fish. The fish jumped, I jumped, then it dived into the weed. Definitely not dead then.

Saturday morning the netting was bowed again but not so far...and still no fish, just lots of rapidly growing tadpoles with miniature back legs splashing around. It then clicked...maybe it was Freddie (or Freda) from the micro pond wanting a dip. I lifted and secured the apron of the netting for easy access just in case and set off for work. I'd love to set up a night camera.

Back from work yesterday evening and straight out into the garden - the netting was still in place and there was mud on the frame so I think I was right about the frog.

On Tuesday I  took delivery of some cottage plant plugs I'd forgotten I'd ordered. These were from Thompson and Morgan through Gardener's World: 12 each of delphinium black knight, geum queen of orange, digitalis excelsior and coreopsis golden joy. As usual, they arrived just as I was going out so that evening I was searching for pots to re-pot them. Best part of an hour later all re-potted and each group labelled. As of today they have more than doubled in size and I am well pleased.  Gone are the days when I used to get excited over handbags, shoes and bling...now it's plant deliveries, Gardener's World and garden centres!

On Wednesday 3 flowers appeared on the strawberry plants, now it's 9 and 3 on one of the pea plants. The runner beans are growing well and I have had to secure them again and also the peas and sweet peas. By the way, there is a sweet pea growing amongst the shade loving plants - I haven't planted it.  Likewise at the top of the garden a clematis is growing alongside the honeysuckle cut back last year. It wasn't there last year and the flowers are huge.

Another strange thing happened on Tuesday. On Monday it rained. And I mean heavy rain as I set off for work. It also rained on Tuesday, not as much but the showers, when they came, were substantial. So...I come home from work, go out into the garden to check on everything and ended up having to water it. Not only was the bird bath devoid of water but the soil was bone dry! How? Why? It rained...hard!

Something has been rooting through my pots and on Friday afternoon I saw the culprit -- a blackbird. Hopefully it's just after the slugs and not the plants. It hasn't happened so far this year but last year I'd go out in the morning and the lawn would be peppered with tree bark mulch; early one morning I saw a pigeon picking up the bark piece by piece off the garden and throwing it on the lawn!

Friday was not a good day for my back. It took me ages to plant out the carrot seedlings (the ones sown straight into the veg bed have yet to emerge. Aware of carrot fly syndrome I separated the seedlings in the potting shed and I have planted them in between the rows of onions and leeks - took me ages.

Slimy weed has been forming on top of the pond where the waterfall is. It's weird stuff - flat, solid but stringy. I started to hook it out with the net and more just kept coming from the sides and bottom of the pond. Hmmm...maybe that's why the fish are sulking!

Last year the morello cherry crop was disappointing, 3 to be precise and they were sour. This year the tree was laden with flowers and small fruits are now starting to sprout. To keep the birds away I have hung cd's in the tree- I'm hoping the eagles and albatross will do it otherwise I'll have to resort to the birdie song (ouch...I know, shut up!).

Today I have transferred some flowers into the front garden, potted up pepper and chilli seedlings and planted more tomatoes. The watercress is doing nicely, thank you, as is the second batch of parsnips (now protected from those pesky slugs and snails). I have also spent over an hour planting our beetroot seedlings. To say I have o/d'd on these is an understatement. I have had to plant a lot of them in the flower beds...remind me not to grow any next year, it's going to take me a couple of years to eat all these. 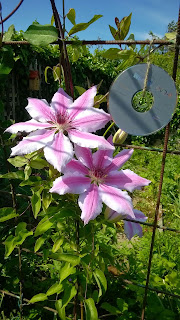 This is clematis that's appeared this year -- stunning eh!
﻿

Well, I  think that's all. I do have 2 bags of compost in the garage that were a bargain and dropped off for me, unfortunately they are 100 litre bags and I can't move them wimp that I am!