What a week it's been. The garden survived the heat wave which is actually still continuing in my part of Dorset. Whilst the rest of you had your garden's thirst quenched on Friday night, we had about 5 minutes of torrential rain and that was it apparently, as the ground was bone dry Saturday morning and today it appears to be raining all around but not here so out with the watering cans later.

On Monday I gave the garden a good drenching and fed the veggies in the greenhouse. The new solar lights look good and the lighthouse one on the rockery near the pond flashes on and off (I've just realised how apt it is to have a solar lighthouse on a rockery!).

Tuesday I had to top up the pond as the level had dropped quite a bit, not that the miniature frogs minded, they were all sunbathing on the lily pads. Keep feeding the fish in the hope that they might surface. But I suppose it means the pond is healthy if they don't need to come up for oxygen. The first tomatoes have started forming, unfortunately the slugs have eaten the cucamelons I planted in the garden but the ones in a pot are doing well. 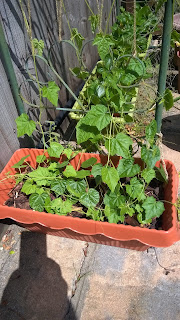 These have grown over a foot since the beginning of the week. The poppies have been busy re-seeding and are flowering in a variety of colours and locations (like in the middle of the beetroot patch) and today a lovely lilac one blossomed.
Wednesday - today the heat wave intensified. I came home from work and it's amazing how much has grown since yesterday. One set of runner beans are full of flowers whilst the others are lagging behind somewhat. The fennel (finally) and the carrots are coming along nicely as are the raspberries, strawberries (not red yet), peas and beetroot.  I watered the garden this evening and halfway through giving it a good drenching I noticed dark clouds approaching and the wind picking up and the first thing that went through my senior moment mind was 'I hope it doesn't rain until I've finished watering the garden!!' There is one flower on the plum tree - a little disappointing as last year it was laden with fruit as my waistline could testify due to the amount of plum crumble I made and I still have jars of spiced plum chutney in the cupboard.
Thursday - and last minute watering of pots and the greenhouse before I went London. No rain for ages and as soon as it's time to walk to the train station...it rains! Not much, just drizzle, but enough to get wet and yes, you've guessed it, as soon as I got to the station it stopped. The first courgette appeared this morning, the first strawberry going red and picked more onions and hung them out to dry. I'm a bit concerned about the spuds as the leaves and stalks are starting to wither. I've grown them in potato bags so wondering what I've done wrong as other people's are still looking healthy.
Friday - Hampton Court Flower Show! I have been looking forward to this for weeks and my credit card has been dreading it! Stayed at a hotel nearby. On the walk through the gardens we saw a heron poised on the river bank, I had to look a few times to make sure it was real. We arrived just as the show opened. I will say now that I was the proverbial pain in the whatsit because it was so exciting to be there. My day was full of decisions - where to go, what to buy, what have we missed, should we have gone left not right. It was an amazing day. The weather was hot and sunny so it was good to go into the marquees as the temperature soared to over 30 degrees. I steered us towards the floral marquee advertised as the best place to buy plants. The WHOLE show is the best place to buy plants!!  My first purchase was Elegia Tectorum which is a stiff type of grass with red and yellow running through it. I also bought a Lantana Miss Huff which smells like exotic fruit juice, Lionheart Lilies and some other bulbs that I can't remember the name of and forgot to take a pic of the label, some succulents from some very nice and helpful people, Achillea 'Sunbeam' and numerous packets of seeds including spinach tree. There were hundreds of stalls and after a while it all began to morph into one. It was nice to see the show gardens, they are actually smaller than when you see them on TV. By mid afternoon we were brain dead and tired and couldn't carry anymore so reluctantly decided to call it a day. But...we'll be back! 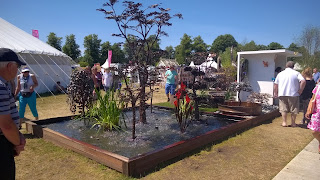 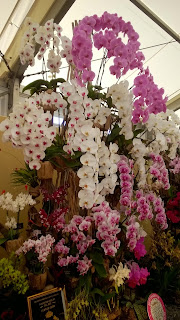 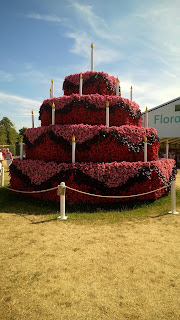 Pics from the show. Above is the 25th anniversary cake constructed from flowers. Above that is an amazing orchid display. Unfortunately, orchids are one of the two things I cannot grow, the other being dahlias. The top pic is a water fountain display which, to be honest, if I bought one of those it would fill the pond! 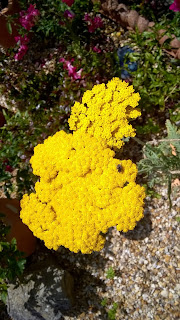 This is the beautiful Achillea 'Sunbeam' I bought. I also bought a packet of mixed Achillea seeds for my cottage garden bed.
Late Friday evening back home and totally exhausted but pleasantly so. Straight out into the garden and picked 8 cherries that the birds hadn't eaten (they have no fear of spinning cds), a couple more pears are forming, the sweet peas blossoming well and there are flowers on the cucumber plants that seem to be growing a foot every couple of days. 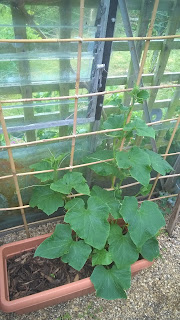 Yesterday - still tired from Friday but nothing stops in the garden. We dug over the cottage garden bed. I have to now plan what's going in there. I planted out some of the yellow Alyssum. We went to one of the local garden centres to check out the price of rocks for the rockery I want to build in the front garden. Having checked in my RHS garden book it appears I have plenty of time to organise it as the best time to plant a rockery is in the Spring.
﻿
Today I had planned on taking it easy, a sort of mini duvet day, but as usual the garden overruled that. I pruned the rosemary and thyme and hung bunches in the greenhouse to dry along with the sage. I had to re-pot the delphiniums, digitalis and achillea for the cottage garden as they were outgrowing their pots and I'm not ready to plant them out yet. I planted some of the gherkins from the greenhouse outside to see how they go.  I have also been collecting seeds from plants that have finished flowering for next year and are safely filed away in the potting shed in envelopes. Foods that I have picked this weekend are: new potatoes, peas, courgette, radish, spring onions, kale, spinach, beetroot, raspberries, strawberries and morello cherries (very sour).
Well, that's about it for this week. Time for me to feast on the fruits of my labour, accompanied by a cold glass of alcoholic grape juice. Have a good gardening week and catch up next weekend.
Regards,
DD﻿