What Happened to the Fish?? Reward Offered for any Information

Well, as you may have guessed from the title, the fish are definitely confirmed as missing. It is obvious now that they disappeared the night before the morning I found the pond netting resting in the pond. As to the culprit, I have no idea, although various theories have been banded around including a heron or some small animal; apparently stoats go after fish. So yes, I have been feeding nothing for the past few weeks. And how do I know this? We had a pond situation yesterday where the water level was dropping quickly. Him indoors dashed to the rescue and found that instead of the water being pumped through the filter and back into the pond it wasn't going back into the pond but everywhere else instead. Apparently there was too much pressure from the pump. Way too technical for me, and the cause? A snail blocking the filter output! The frogs looked on with interest as him indoors was soaked with pond water. Anyway, all sorted now and normal service resumed minus the fish although we did discover a couple of tiny orphan fish that have escaped the kidnapping so I can carry on with the feeding.

Apart from that it's been a good week in the garden. Still no rain and four out of the six water butts are now empty. The new crop of peas are podding and the runner beans have started to grow on both crops. On one of the runner bean plants there are loads of blackfly in just one section despite having sprayed the leaves. There are also plenty of ladybirds so hopefully the ladybirds will dispose of the blackfly. Not sure if this is what was actually happening, but it looked like ants were herding all the blackfly together onto one stem...do ants do that?

If I have mentioned this previously then please forgive me - my mind isn't what it was - but I have a new white wipeboard in my pottering shed. This is so I won't forget what I have to get done during the week, that is as long as I remember to write it down! This week I have managed to wipe off quite a few completed tasks but there's still plenty to do. I responded to an advert for free rockery stones and drove round to collect them on Monday. The man, Mick, has dismantled two rockeries so there were stones of various shapes, size and weight everywhere and all to be taken, except I couldn't lift most of them. I filled the boot with smaller ones and hopefully him indoors is going round tomorrow to collect some of the larger ones, if there's any left, fingers crossed.

Tuesday I spun the new composter eight times as per the instructions (every two or three days). It's filling up nicely thanks to donations from further afield.  I also sowed seeds for my new cottage garden that him indoors has been working on today (unless he's been watching the golf, I'll find out when I get home). He's putting down gravel paths so when it's all grown I can walk amongst the flowers to prune etc. Seeds sown are quaking grass, viola 'chicky chicks', verbascum mixed and arctic summer, perennial summer mix, achillea summer berries and tree spinach. I also sowed some more little gem as the last sowing has disappeared somewhere. Disappearing seems to be a theme in the garden recently! The gypsophilia has grown about 3 inches and the cucamelons have tiny yellow flowers and some of the tiniest fruit I have ever seen. They look like microscopic cucumbers. And following on from my purchases at RHS Rosemoor - every time I walk to and from the greenhouse all I can smell is curry!! 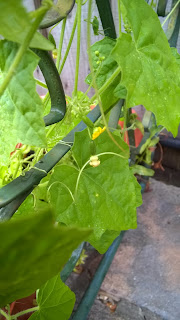 This is the cucamelon fruit, it's in the middle of the green cross bar.

Thursday - when I came home from work I was greeted with the first passionflower on next door's overhanging plant, the first cucumber and the new rose (for your eyes only) in flower. I had to give the garden a good soaking which took over an hour and I also topped up the pond which I now realise wasn't necessary. One of the baby frogs has taken up residence in the cauldron pond normally occupied by Fred/Freda so there could be a turf war looming...watch this space. 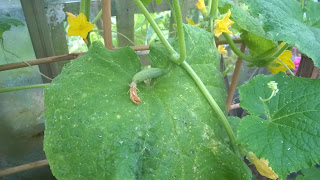 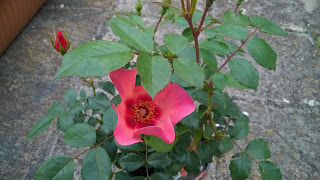 For Your Eyes Only, Rose of the Year

Friday morning, whilst I was sat in the conservatory eating my oatiflakes and almond milk, a sparrow flew down to the patio and hopped over to the pot containing some of the overspill beetroot plants. The sparrow hopped into the pot and started rustling around amongst the leaves, bobbing it's head up every now and then. Also, there was a huge bumble bee feasting on the 'hot lips' salvia. I could have sat there all morning but I had to go and make my toast.

Yesterday him indoors treated me to some new secateurs; you certainly get what you pay for, they are amazing, cutting through branches like a knife through jelly. I sort of got carried away but I did do a good topiary job, if I may say so, on the cherry and plum trees. I resisted the temptation to tackle the apple and pear trees but as soon as November comes I'll be straight out there, secatuers a'clicking! I had a recce of the 'estate' and the leeks and beetroot are doing well although the beetroot are all leaf and not much underneath at the moment. The fennel has put on a spurt as have the carrots and one has even broken through the surface - just the one. I potted up the herbs I bought last week and yes, I ended up smelling of curry...tell me again the reason why I wanted a curry plant??? I also dug up the Maris Bard potatoes, the ones I should have dug up last week. Quite a good crop, around 50-60 which I'm pleased with for a first attempt. We had some with our BBQ last night - yummy! I picked a few blackberries as well but they're a bit sharp at the moment.

I am now on Twitter @daisydigga and on Facebook - but still getting to grips with that at the moment.

Time to go...enjoy your garden and catch up next week.