Dorset Garden Diary - Chutney, Cake and How Much Can a Potting Shed Hold?

The week has started well. It was supposed to rain most of the day but apart from a shower this morning it stayed dry. Extremely windy though, some of the larger pots were blown over. And, of course, I would choose the windiest day for months to take down the runner bean pyramid. There were no more flowers growing and the plants have started to die off, so down it came. Not sure I will plant that variety next year as they haven't cropped as well as I thought; the runner beans grown from last year's beans, however, have been much more fruitful and are still in flower. Not only has the strong wind blown over pots, it's provided some windfall pears which are now wrapped in newspaper and stored in the pottering shed. Him indoors had a couple from last week's windfall and said they are very tasty. I picked the cucumber to have with my salad (fresh from the garden) and not only did it actually taste of cucumber but it smelt amazing - such a difference from mass produced. Rotated both both sides of the composter.

In last week's blog I mentioned that I had planted a rudbeckia in the cottage garden. I lied. I thought I had, but when I was taking down the runner bean pyramid I noticed that it was in position, but still in the pot. I'm beginning to think I should make this a senior moments blog! Anyway, rudbeckia triloba prairie glow now planted in the cottage garden. I picked all the kale and put it on the compost heap as the few remaining leaves were covered in caterpillars. I also picked leeks, parsnips and carrots (some of which I took next door as they always take in parcels for me), and some of the smaller beetroots which I've boiled and pickled. And...I found two pea pods. 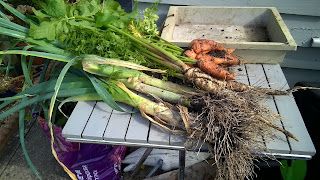 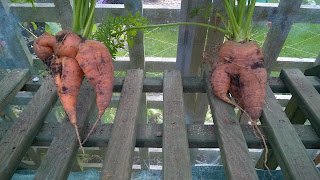 Back to my signature carrots!!
﻿

With the sun being lower in the sky there is less dazzle on the pond's surface and the fishlings are now visible against the lighter stones on the bottom. They have grown well during the summer, progressing from half the size of my little finger to bigger than my thumb - not surprised with the amount they are eating.

Tuesday - and I finally got round to watching last Friday's Gardener's World. Monty mentioned that the hellebores are flowering out of season and mine have also been in flower for a few weeks (normally Spring). He also mentioned it's time to plant frutillaria bulbs which I shall do this week, and to plant them on their sides and in grit (didn't know that). Actually, I need to plant all the bulbs as this morning my 100 allium bulbs arrived courtesy of Thompson and Morgan through Gardener's World magazine. I also learnt that clematis will grow anywhere as long as the roots are in the shade. Handy to know as I have a north facing fence that needs something to liven it up. And, one more thing I didn't know, carrots don't like rich soil and they will split while growing although still edible. As I'm going to be sowing green manure once the veg have been lifted (Monty said last weekend but missed that deadline) I'll have to rethink where I grow them next year. He also said to take rose cuttings but not sure I can wait two years for them to take!

I went to a garden centre this morning (just for a change!), bought some Jeyes Fluid for cleaning the greenhouse, pots and seed trays and rescued some carrot seedlings that were in the reduced section. Back home I watered and planted them with care into troughs, hopefully they'll take. I then moved the white anemone that has sprung up in the gravel and pot garden to the cottage garden, picked up another windfall of pears (still very windy here). As you can see, not all gone pear-shaped: 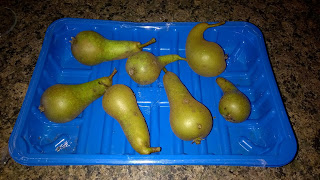 And I still have a dis-assembled pagoda in the kitchen. Parts of it are heavy so I am waiting until I work out exactly where it's going then I only have to move it once. This evening I made some mango and ginger chutney (with plenty of garlic and chillies) it smelt divine. I was going to show you a pic of it cooking but probably better not to...it certainly tastes better than it looked whilst cooking!

Wednesday - this morning I decided that I need to reclaim my kitchen and put the pagoda in the garden. So, I had a working breakfast sat in the conservatory, looking out at the garden for the best position. I decided it's going in the gravel and pot section. I went out and moved some of the pots out of the way as I needed a clear run, so to speak, and piece by piece I carried it out and built it up. I have to say it looks grand: 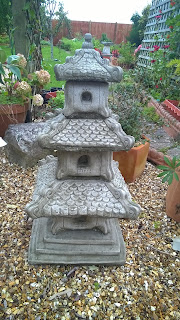 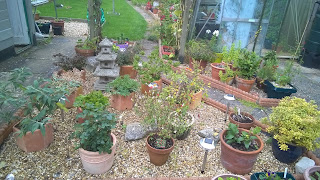 I then thinned out the cucumber leaves and flowers, there's nine cucumbers growing at the moment so not complaining, then the tomatoes had a number one cut and here they are, bald: 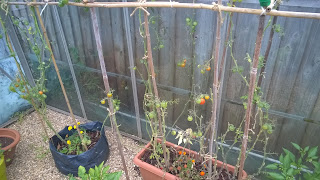 Took some blackcurrant sage cuttings and re-potted the pineapple sage for putting in the conservatory over winter as it's not hardy. Then the rain started, great heavy splattering drops of it and continued for the rest of the day. That was the end of the day's gardening.

Friday - home from work and straight out to check the garden and feed the fish. They were just below the surface and pounced as I threw the food in - and here's me thinking it was me they were pleased to see! In the greenhouse the cucumbers are growing well and most of the tomatoes are reddening.

Saturday - started with a perfect sunrise over the mist-covered fields and turned into a gorgeous day, very hot in the back garden, almost like summer again. I fed the fish then went out again with my new camera to practice some shots. The fish dived for cover and I wasn't even that close to the pond. How did they know I had a camera? When I didn't have it with me they were on the surface and as soon as I went in to get it...gone! Even the squirrel, who is impressed with our new fence and travels frequently across it, was camera shy.

Anyway, today is the day I finally decided that I must sort out the pottering shed: 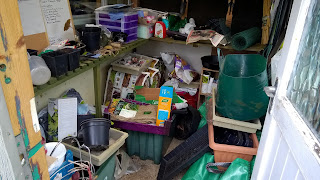 See what I mean??? I made an early start and it took over 4 hours. I moved everything out apart from the heavy bags of tree bark and compost. Amazing how much was in there: 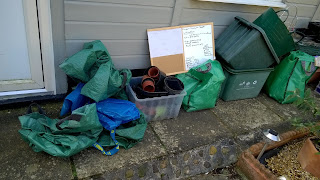 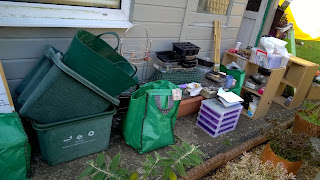 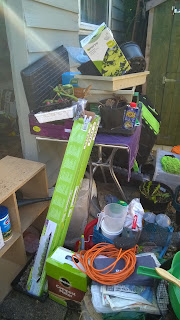 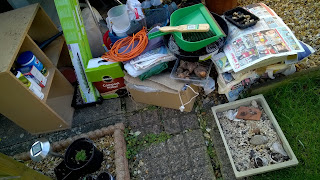 And mustn't forget the onions: 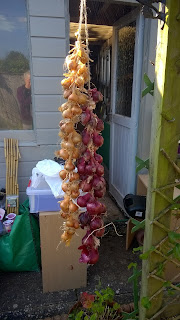 ﻿
And this is how it looked when I'd finished (although I still have to put the trays and pots in but they need cleaning first): 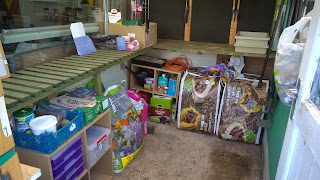 Also today - white feathers were scattered across the lawn and garden, some of the leaves are beginning to turn autumnal. And spiders... well don't talk to me about spiders. At the moment, if something hasn't moved or been moved in ten seconds it has a web on it...including me the cheeky things!  Do you remember the Indiana Jones film where the woman in the jungle screams every time she turns round because of the creatures? Well that was me today with the pesky spiders. Picked more gherkins and pickled them, also picked the remaining beetroot from one of the flower beds and planted green manure to over-winter and covered it with sacking to stop the cats digging up the soil. Cooked the beetroot and froze it. During the week I made a beetroot and chocolate. Unfortunately, I left it a bit too long  and it burnt slightly but I scraped the burnt bits off and covered it in icing. It didn't look aesthetically pleasing but, even though I say so myself, it was nice and moist and delicious.

The lionheart lilies are growing fast: 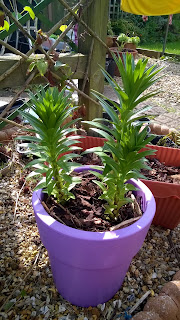 I then fed the plants in the greenhouse, watered the outside pots then picked veg for dinner. The parsnips are now copying the carrots: 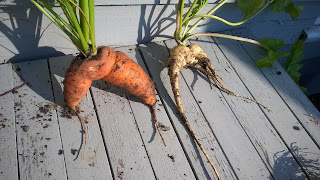 ﻿
Well that's about it for this week. Rain forecast here for tomorrow but then the week looks friendly for us gardeners.  Have a good one and catch up next weekend.
Regards,
DD﻿