Dorset Garden Diary - Reap What You Sow and a Senior Moment

Good evening from a gorgeous sunny Dorset. It's been the ideal day for gardening and, as I finished work this morning after a 48hr stint, I've made the most of it.

Monday - and having been advised that the cute little miniature tadpoles in the bucket of water aren't actually cute miniature tadpoles but mosquito larvae - thank you Mr E for that info (and that in parts of the Caribbean it is not advisable to have standing water because of the larvae) I have now disposed of the bucket contents and all other open standing water in the garden. I had intended a day in the garden but it was raining yet again so all that needed doing was feed the greenhouse crops.

Wednesday - a much better day although not without the odd shower, quite windy and autumnal. I did some dead heading of the perennials, picked the few runner beans that were ready - don't think I'll be getting many more. The Razzmatazz chillies are coming along very nicely and the cucumbers are getting there, oh so slowly. Strange because there are, and have been, loads of flowers, just not many cucumbers. Later in the day the weather brightened and the bees and butterflies came out to play. Made an extremely tasty soup from carrots, onions, parsnips and tomatoes from the garden. 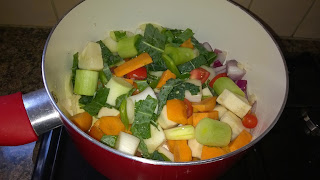 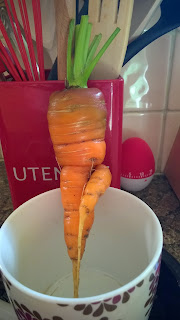 Thursday - and a donation of  compost material thank you very much. The second side of the tumbler composter is now also full up. I'm turning each side 8-9 times 3 times a week as instructed. This evening I had a stir fry with carrots, onions, leeks and fennel fresh from the garden and a chilli...well, a little bit of a chilli. I had a tiny, tiny taster and couldn't feel my tongue for ages! Not sure what I'm going to do with the rest of the crop, maybe dry them or make a chutney perhaps (I've given some to a couple of hardened chilli tasters to see how hot they really are or if it's just me...I'll keep you posted).
Sunday - home this morning after a long shift and overtime. I did manage to get out and buy a couple of grasses for the cottage garden though: 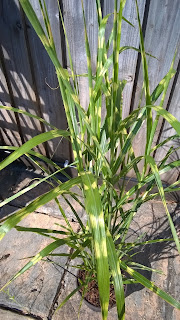 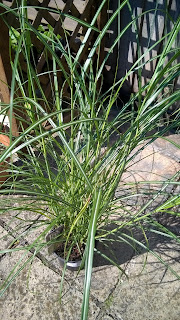 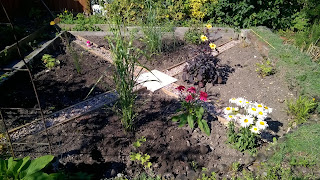 and here they are in situ in the cottage garden
I also bought some new garden shoes: 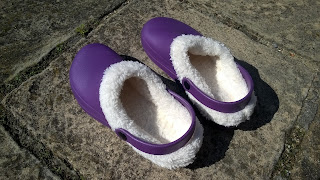 How cool (and warm!) are these!!!
So, today. I have pulled up the peas as they are dying off, pruned the runner beans which are flowering again and also removed the netting around them. I then cut back the wild rose and passion fruit climbers that have encroached over the fence from next door as I don't want them shedding autumnal leaves over the pond. I've left the fruiting overhanging blackberry branches though. I dug up the cucamelons as I don't like them. I thought they would be soft and melon-like but they aren't, they are crispy like cucumbers and don't really taste of anything. I also gave the lawn a no.3 cut...looking good: 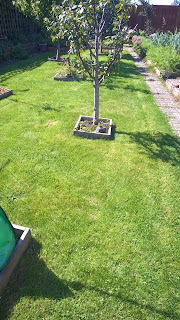 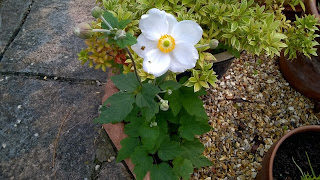 Very pretty, I'll move that to the cottage garden
Fed the fish when I arrived home and the fishlings were straight on it. This afternoon, in the balmy sunshine, the adult goldfish were ducking in and out under the water falling into the pond from the pumphouse, was lovely to see. Haven't had time to catch up with Monty this week but I'll watch him after Countryfile. Dinner tonight is roasted vegetables from the garden.
Countryfile finished and looks like a perfect week ahead for us gardeners to get out and do our stuff. And talking of perfect...the most amazing sunset is happening as I speak and getting more amazing as I edit. One of the things nature does best and money can't buy!
Enjoy your week gardening in the September sunshine and wrap up warm in the chilly nights.
Catch up next week,
Regards,
DD﻿
﻿
Posted by Daisy Digga at 20:32