Hi from a chilly, windy and occasionally dull Sunday here in Dorset. It's been chilly all week but at least the sun was shining; unfortunately I haven't been able to take full advantage as work got in the way. I did manage a few hours on Tuesday and, as usual, the first thing I did was feed the fish. Whilst waiting for the fish to surface I wondered when it's best to stop feeding them for the winter, so I read the instructions on the tub and it said don't feed if temperature below 12c as their digestive system slows down. Hmmm...it definitely felt colder than that and when I checked it was 4c...ooops! Thankfully they survived to see another day and, in my defence, they were hungry.

I skimmed all the fallen leaves off the pond's surface (how do they get through the netting?), pulled up the rest of the gherkin plants outside and in the greenhouse as no more growing, cut back the runner bean plants but left the roots in (thank you Carol Klein) then had a mooch round the garden. The salvia hot lips cuttings I took a few weeks ago have taken and are flowering, 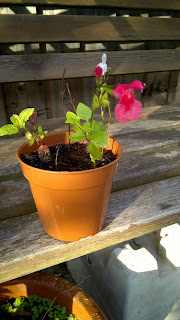 the sedums are in bloom 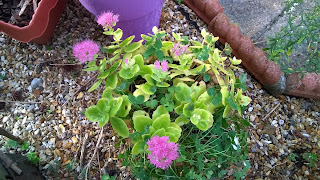 I found this little darling peeking out from behind the leaves 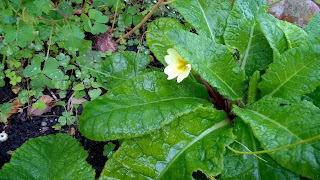 and...last year this hydrangea was light pink and white, something must have changed in the soil, perhaps. 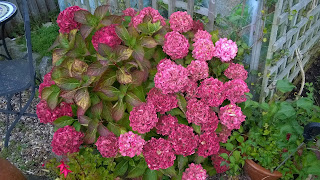 Aren't gardens wonderful!
Managed to watch Gardener's World before the weekend started (for a change) so yesterday I dead-headed the cosmos and dahlias (as advised by Monty), the latter brightening up the cottage garden and still flowering well. 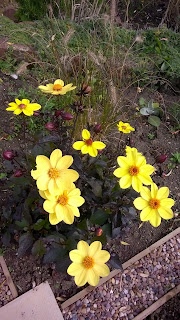 I propagated some begonia leaf cuttings, planted some apple seeds - unfortunately I have no idea what type they are but they were very tasty. Skimmed more leaves off the pond and...finally...cleared out the greenhouse for cleaning. I picked the last large cucumber and the few remaining red tomatoes, pulled the plants and moved the chilli and pepper pots outside. I then scrubbed the benches, bamboo cane frames and the glass and frame with a mild Jeyes fluid solution. Was debating whether to pull up the weeds growing through the gravel or put weed killer on them; in the end I decided on weed killer. So here it is, my temporarily empty greenhouse (apart from the weeds). 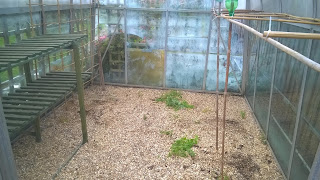 Last October when I checked on the previous year's stored amaryllis bulb I found it had rotted, so I bought another one which flowered profusely through the winter. When it had finished flowering I stored it in the pottering shed, still in it's pot and on it's side (as advised, but I'm having a senior moment and can't remember where I heard or read that's what you have to do, but it works).To be honest I'd forgotten all about it until I came across it last week and, to my delight, I noticed a little bit of green deep inside the dried brown folds so I potted it up, put it on the kitchen window sill - look at it now: 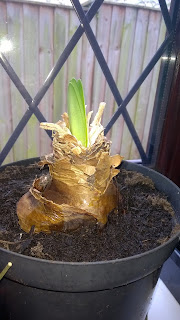 Going back to the lily (?) I mentioned last week, thought you might like to see how it's come on. Gorgeous isn't it? 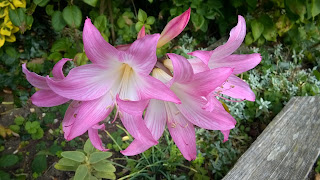 ﻿
Today got off to a slow start as, previously mentioned, the day was chilly and windy, but it did brighten up a little. I didn't get round to aerating the lawn and raking up the leaves because I don't want to step on his indoors' toes (that's my excuse) as the lawn is his territory! Oh, and by the way, there are no ill effects or bald patches from the little incident with the weed killer a few weeks ago! I put the pepper and chilli plants back in the greenhouse and the following to over-winter:- Japanese maple (for some reason it doesn't like the garden very much and keeps shedding leaves even when it's not windy but absolutely loves being in the greenhouse), the olive and lemon trees, the young ginger plant (it's taken a while to grow so I don't want to lose it), salvia hot lips and the lantana miss huff (a precaution) and the lemon verbena. And talking of the lemon verbena, I took some cuttings a few weeks ago as an experiment and it looks like one of them has taken (happy) so I planted a few leaf cuttings today to see if they will take. I have also moved the pineapple sage into the conservatory where, according to the label, it will flower all winter. I was going to sow the sweet peas but they need soaking in warm water overnight (how does the water stay warm?) so I'll do those tomorrow and the garlic, but that's for next week.
Well, I think that's about it for this week. Autumn's trying to take a hold but Summer still hanging in there. Hope you have a good gardening week, look's like it's not going to be as cold as previously forecast.
Regards,
DD
﻿
﻿
﻿
﻿
Posted by Daisy Digga at 20:37