Dorset Garden Diary - It's Been A Quiet Week Horticulturally Speaking

Hope you've all had a good week. A quiet one for me where the garden's concerned but busy in other areas of my life. Thankfully, there's fractionally less to do this time of year as I'm not planting any more bulbs and I have re-planted the perennials I wanted to move. So it's just tidying, cleaning, spiking the lawn, raking up the leaves and preparing to hunker down for the winter which I can do this coming week.

Monday - rain. Lots of rain. Play suspended. But it's good for the garden so I'll have to find something else to do today. I have plans for the front and back gardens so I could be getting on with that I suppose. I did notice over the weekend that the recent resurgence of summery weather has brought the honeysuckle back into flower. 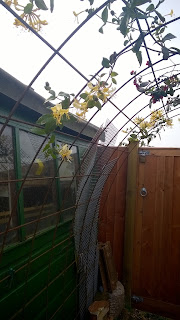 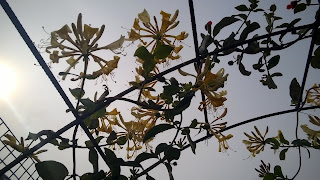 The green manure is already coming through, that's quick (see pic below). Last week him indoors assembled the kinetic windmill that we bought a few weeks ago, one wheel turns one way and the other the opposite...being a country girl I have no idea how that happens but it does. 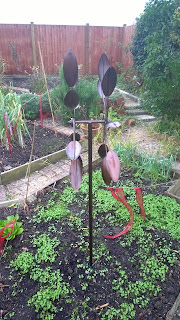 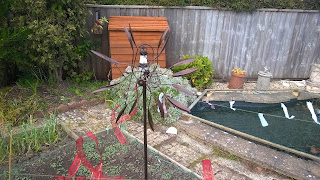 I belatedly watched Gardeners World and too late Carol advised to leave the roots of pea and runner bean plants in the ground as they feed the soil. Hmmm...wish I'd known that a couple of weeks ago. I'll do it with the last couple of runner bean plants though. Monty advised on some plants to extend the autumn flowering - giant hyssop and sedums - not sure I should be buying more plants at the moment! He also said wrap delicate pots in plastic for over-wintering but I will probably put them in the greenhouse when I've given it a good clean which will be when the cucumber, tomatoes and chillies have finished. Thankfully, it's warmed up a bit. Jobs for the weekend (missed it) were keepings cuttings well misted which I do anyway, raising pots off the ground so they don't get waterlogged, well they stand on gravel so...tick, and keep dried runner beans for next year...tick!

Tuesday - more rain although the day did start with some atmospheric low lying mist along the hedgerows in the fields. Unfortunately play suspended again.

Thursday - the skies are blue and the back garden is looking good: 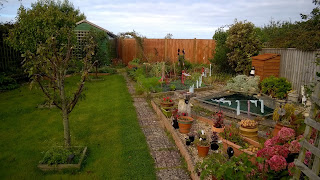 In the front garden the snapdragons have come into flower and, very belatedly, one begonia has chosen to start flowering 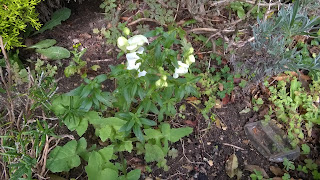 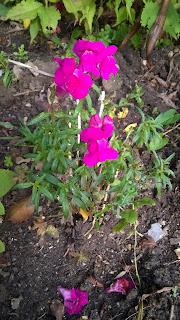 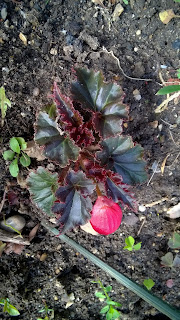 Saturday - and at last, a chance to get out in the garden. I've been getting withdrawal symptoms! The fish appear to be getting used to the feeding times as they were on the surface waiting, both this morning and this afternoon, attacking the food as soon as it hit the surface, especially the voracious fishlings...maybe they're piranhas!. I pottered around, pruned the cucumber plant right back as it keeps flowering, taking energy away from the two remaining growing cucumbers. I picked a few more tomatoes, they will be finished soon but the chillies just keep coming...anyone got a book on 101 ways with chillies?? Definitely one of my success growings this year. I gave the garden a good watering as it hasn't rained since Tuesday and none forecast into early next week. It is due to get much colder though so I've shut the greenhouse door for the first time this autumn. The mystery plant has evolved over the week. I'm thinking it might be a type of lily? 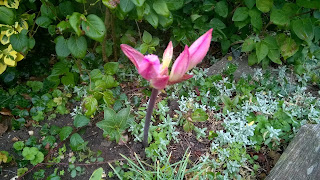 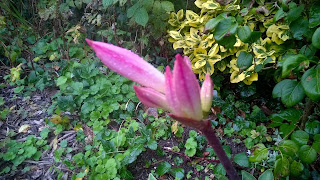 I then picked fennel and leeks from the garden to go with some of the stored carrots, spuds and parsnips. I do like roasted vegetables, and pie, and yes, I know that was on the menu last weekend but I like it - and I do eat the salad harvest during the week...honest!
Well, that's me done for the week. Looking very gloomy outside today, and chilly. Have a good week, stay warm and catch up next week.
Regards,
DD﻿
Posted by Daisy Digga at 08:48