Can't believe another week has gone by, where does the time go? It's been a mixed one regarding the weather. Monday started frosty and stayed cold all day. Tuesday started 12 degrees warmer than Monday and rainy - just for a change! By the afternoon the temperature had dropped by four degrees and the wind had picked up. Wednesday morning became dull, dull, dull and finished with clear blue skies. Thursday - rain. Friday - rain. Saturday - gale force winds and rain in the afternoon. Today - even stronger winds but thankfully no rain.

Monday and Tuesday - didn't have much time for gardening but I did turn the pond pump back on at 17.15 so hopefully it will continue coming on at its usual time again.

Wednesday - and the pump came on just before 10.00am this morning so that's good. Fed the fish as they were on the surface waiting, or waiting for something anyway. Before the day turned dull and muggy, the sky was clear in places just after sunrise and Venus appeared extra bright; there was also a full moon this evening.  I dug in the green manure for over wintering, cleared the pond of leaves and twigs, dug up some of the fennel that had gone to seed and saved some of the flowers to dry out and sow next year. The afternoon turned out sunny and warm. The garlic bulbs I planted have started to break through already. 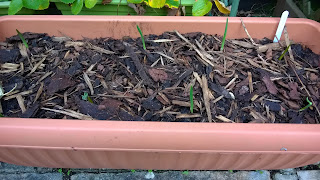 The composting is coming along nicely in all the bins. I have put quite of bit of material in them recently (thank you one and all for your donations!). I have acquired some sweet mini pepper seeds to dry out which hopefully will grow next year, as this year has been a washout re the peppers. Maybe I should grow them outside and not in the greenhouse.

Thursday - no gardening today but I was up early and the back garden was bathed in a silvery morning moonlight from the full moon. It probably would have helped if I'd had my glasses on but it still looked spectacular even in myopic soft focus. And then an hour later the sun was shining on my neighbour's tree, setting it on fire (figuratively not literally, thankfully!). 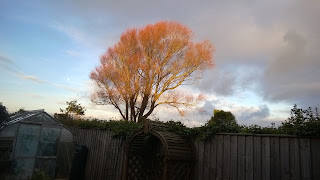 Saturday - wild out there today! I turned the pond pump off because the pump needs to be higher in the water this time of year so that it doesn't pump away the warm water at the bottom of the pond where the fish winter. Plus, if it freezes when I'm not around it can not only damage the pump but any water left in the hose can freeze. So, if the water is pumped out of the pond and the hose is frozen the water will be leaving the pond but not going back into it...worse case scenario is we could end up losing the fish.

Quite a busy morning in the garden. I de-headed the lilies and there is another flower waiting to bloom 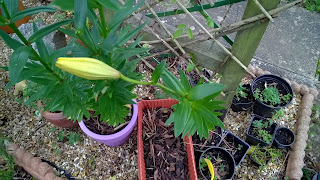 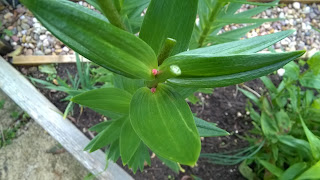 Also, tiny red buds have formed at the base of the upper leaves (above). One raspberry has grown - very tasty, thank you, a clematis is in flower for the third time this year 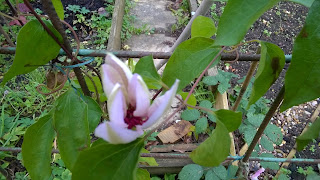 and the hellebores are still going strong. 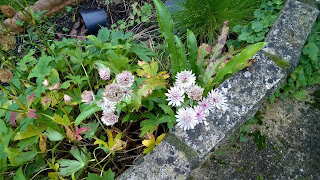 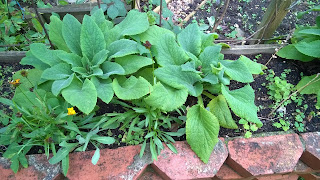 and this is a pic of the inside of the red flower in the cottage garden that I still can't remember the name of! 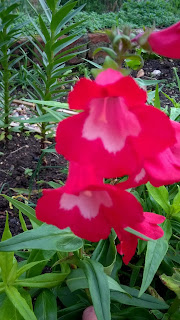 I finally emptied the chilli and pepper pots in the greenhouse, cut back the dahlia I'd grown in a pot that had taken all summer to flower and mulched it for over-wintering. Last year I dug up the tubers and stored them but it wasn't successful. The freesias are doing well, 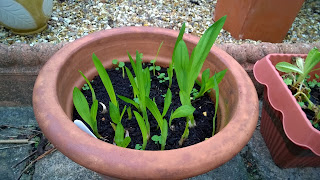 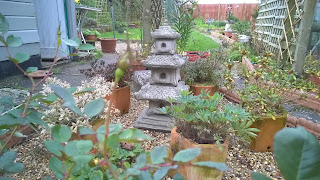 and, I don't know if you remember, but I sowed some apple seeds a few weeks ago as an experiment. Well, look at this! 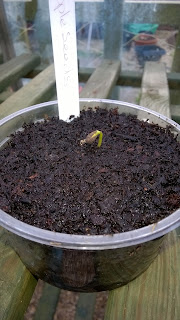 Finally, I got round to planting most of the plant delivery I received week before last. I planted one borage tuber in a pot for the potted herb garden and the other two at the top of the garden amongst the fruit bushes and lemon balm. I have the echinacea and lily of the valley in pots for the winter as I'm not sure where I want to put them yet. I gave half of the giant alliums and some of the lily of the valley to a friend in exchange for jam jars for my chutneys and jams. All I have left to do now is put the giant alliums in the garden and the 36 ground cover plugs. Phew...I think I'll do that next week!

And finally, the amaryllis...I've created a monster! 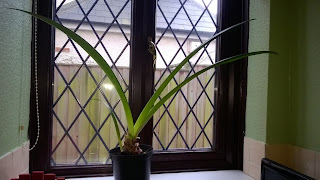 Watched Countryfile this evening and although more rain is forecast for next week, it looks like we could escape most of it here...so no excuse for not getting the ground cover plants planted! Have a good week, catch up next Sunday.
Regards,
DD﻿
Posted by Daisy Digga at 20:34