Dorset Garden Diary - Where Did I Put My Wellies?

Well, it's been a bit of a washout this week in the garden. We had storm Abigail at the tail end of last week and then storm Barney this week. Thankfully the garden survived Abigail but the high winds of storm Barney tore off some of the cd's I'd rigged up as a heron deterrent around the pond. The storm was due to hit Tuesday afternoon so I was up early before work to check that there wasn't anything that could be blown away or cause damage as winds up to 70mph were forecast. Thankfully, there was no damage from either storm and, amazingly, not only were the lilies still standing, but still have most of their petals.

The fish appear to be enjoying a full pond of water to swim around in. The water, at the moment, is at the highest level I've seen it since last winter. Lovely and clear though.

In a way it's not been too much of a disappointment that the weather has stopped play this week as I've been busy with other things and wouldn't have been able to get out there much anyway. And, isn't it always the way when you're busy? Late on Monday my delivery of plants arrived...at the beginning of a week when there was no time to plant them out! I unpacked them all, misted them with water and left them in the shed for the time being; I'll have to plant them out it next week.

The delivery included one Viburnum Kilimanjaro which is going in the front garden where the large hydrangea used to be, three Anchusa Loddon Royal (borage - and good for bees), two of these will be planted with the lemon balm at the top of the garden near the fruit bushes and the other will be planted in a pot near the house, 20 giant allium bulbs, as if I didn't have enough already, but they were free. I did say I didn't want them when I placed the order but apparently I didn't have a choice in the matter. As soon as the order is placed, computer says you're having them! 30 ground cover which will be planted in both the front and back gardens - three each of Dianthus Deltoides, Sedum Kamshaticum, Helianthemum, Campanula Carpatica, Sedum Spureum, Thymus, Gypsophilla Pink, dwarf Asters, Campanula Carpatica Alba and Cerasticum. I also have a an unnamed bag of something which could either be Echinacea or Lily of the Valley...no doubt I'll find out in due course.

All the food in the robin feeder had disappeared by Tuesday morning and as I haven't actually seen any robins I suspect the squirrels have been having a good feed. Probably payback for me taking one of their walnuts! I need to go to the garden centre and get a squirrel-proof feeder. And I still haven't cleared the pepper and chilli plants from the greenhouse - there's just not enough hours in the day. I did move the ginger plant outside though, as it looks likes it's dying off, or maybe it's supposed to in the winter.

Thursday - and it's been hammering it down for most of the day. It stopped around mid-afternoon so I went out in the garden to feed the fish and to have a check on everything. The blackcurrant bush has buds on it: 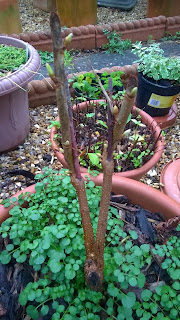 this allium has grown since Tuesday: 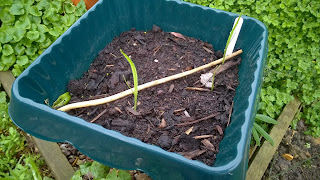 I've been waiting for this to flower all summer in the cottage garden: 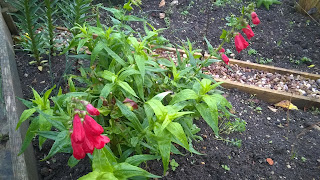 and these daffodils were not here last weekend! 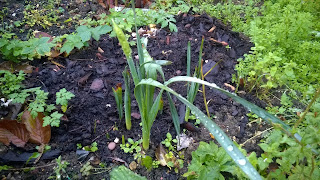 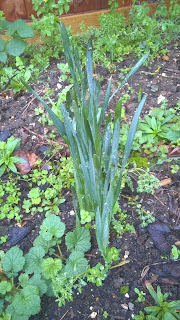 Friday - and the balance of my plant delivery arrived - Lily of the Valley bulbs - so the unknown pack of bulbs I received on Monday is now confirmed as Echinacea. It's turned very cold today so I didn't feed the fish as their digestion slows down in cold weather plus they were hiding in the warmer water at the bottom of the pond. I turned off the pond pump just in case the weather turned cold enough overnight to freeze.  I have made a note of the time I switched it off (17.15) and I will have to switch it back on at the same time when the weather warms as it is on a timer and I want to keep the same timings. I also put a plastic disc on the water, this is because if it gets cold enough to freeze, the water underneath the disc won't and it will help to keep the pond oxygenated.

Sunday - the pot of lilies had blown over so I righted that and had a look around the garden and noticed that the majority of the flowers in bloom are all yellow! Due to the high winds small twigs and leaves have fallen through the netting into the pond. I didn't have time to clear it today so I'll have to do it as soon as I can next week. Pulled up some leeks for lunch which were very tasty in a home made cheese sauce!

Very disappointed with the amaryllis...it's all leaves and no stalk!

Well, that's it for this week. Have plans for next week: weather permitting, looks like it's going to warm up enough to plant out the new arrivals. Have a good week and catch up next weekend.