Dorset Garden Diary - First Outdoor Sowings and the Heron is Back

Happy Easter...I've had a delightful chocolate day! Another productive week in the garden even though I was away for a few days. The weather is starting to warm up and we've had some much needed rain - actually quite a lot over the past couple of days.

We were away from Sunday to Wednesday on an amazing family reunion in the New Forest. The weather stayed kind to us, chilly at night but sunny and dry during the day. When we arrived back on Wednesday, before unpacking it was straight out into the garden to check all was ok, which it was. The bird feeders and bird table needed replenishing and the fish were waiting to be fed. We now have a few different varieties of daffodils/narcissus in the garden 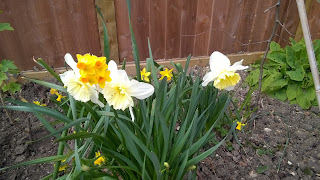 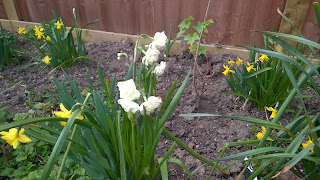 More polyanthus are in flower, these are so pretty 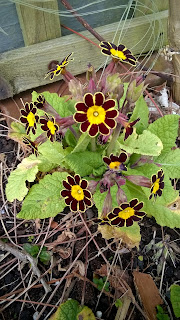 ﻿
and in the greenhouse the freesias are closer to flowering 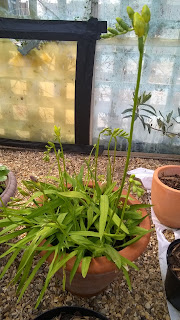 and the salvia hot lips has new leaf growth and smells amazing - I wish I could upload the smell for you! 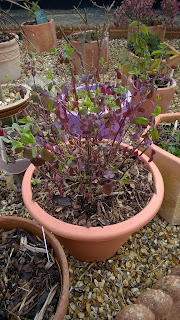 I've been putting both of these outside for a few hours a day to acclimatise them and also the kale and broccoli.

We then went to buy some bags of compost and a couple of growbags. Next on the agenda was next door to collect the seedlings my neighbours have been watering while we were away - and they did a good job: 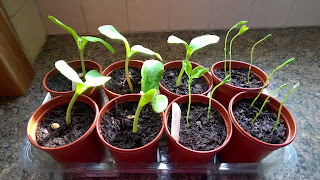 Above courgettes and sweet peas and below peppers, chillies, tomatoes and pak choi. 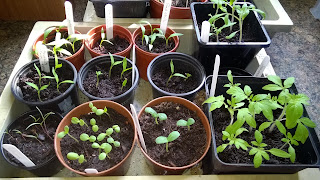 And in the propagator the celeriac has finally surfaced 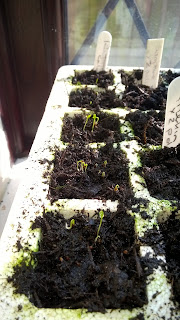 The final job of the day was to take the plastic covering off part of the veg garden as rain was forecast and I wanted the ground to have a good soaking before I sowed seeds. The day ended with a crisp, clear night and an amazing full moon.

Thursday - the clear night was followed by a crisp, clear morning (46F 8C) and the full moon was still visible. Unfortunately the weather soon deteriorated and the rain came in. Today was preparation day for sowing over Easter. But first, I happened to look out one of the back windows and saw the heron standing in next door's pond (hope you can see it). 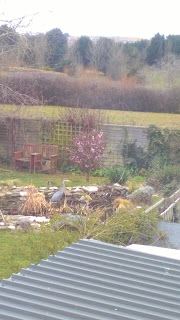 It was there for quite a while just wandering around. I had to go out to stock up on more bird food and when I came back it was still there. In fact, it spent most of the day there. It's a handsome bird, but not good to have around if you have a pond and I'm hoping it doesn't try and get to our fish. I'm assuming it comes over from the nearby RSPB bird reserve. I put most of the greenhouse plants outside today so they could have a rain shower. Planted out the clematis along the back fence and sowed more basil (the last seeds started to grow then vanished) and watercress seeds from last year's crop.

Friday - 46F 7C clear and sunny and stayed dry and sunny all day...it was definitely t-shirt weather - and probably shorts as well but I didn't want to scare off the sparrows! Today was big outdoor sowing day! But before I started, there were a couple of  indoor jobs to do: I split the coriander plant into two pots, sowed the rest of the sweet peas and some tomato Super Sweet 100 seeds that came free with a magazine. Prior to starting on the outside sowing I drew up a plan of the veg beds and where to plant everything a) for crop rotation to stop disease and b) so I would remember what I've planted and where (always a problem with me!). First to go in were the mixed onions, then the first sowings of: peas (Hurst Green Shaft), chard (Bright Lights), spinach beet, parsnip (Countess F1), beetroot (Detroit 2), carrot (large...honestly, that's what it says on the packet!) and lettuce little gem. I also planted out the broccoli from the greenhouse. I have covered the seeds with perforated polythene a) just in case we have a frost and b) to keep the birds off. Around the edge of one of the veg beds I planted a seed tape of flower that, once grown, are supposed to repel slugs...we'll see. I've left the rest of the veg bed covered in plastic sheeting to keep the soil warm. 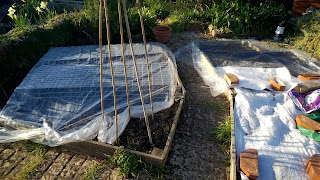 Whilst out in the garden the sparrows, blue tits and blackbirds were still feeding and the fish were sunbathing. 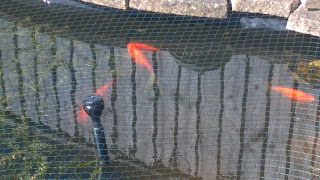 There was a huge bee buzzing around the rosemary and campanula and a pale, lime green butterfly. The temperature at lunchtime in the greenhouse was 66F 18C. I watched Gardeners' World thiseveningand it appears I have sown my potatoes incorrectly. I have put eight in a potato bag but you're only supposed to put one for big potatoes or two for smaller (this explains why the crop was small last year) so I have to take them out and replant. Thankfully, they were only the experimental crop.

Saturday - 50F 10C and rain, lots of it. I had to work today and a few minutes before I was due to leave I heard a screeching commotion from the seagulls, looking out I could see them dive bombing the heron which appeared totally unperturbed and still landed in next door's pond. I was a bit concerned it might try and get to our fish and was reluctant to leave for work.

Sunday - dawned bright and sunny and within half an hour it was torrential rain. 45F 7C. Actually, the day wasn't as bad as was forecast, we had quite a few dry spells. First thing this morning I checked the pond, the netting is still in place and the fish have eaten the food although I haven't seen them. Him indoors is back from Berlin today (football trip!)...his to-do list is getting longer!!

I sowed outdoor cucumber/gherkin seeds and cucumber (Passandra F1) greenhouse seeds in the propagator, leeks and beetroot (rainbow beet) in a seed tray in the greenhouse and carrot (Amsterdam 2 amice) in a small trough which I put in the greenhouse. It feels like I'm playing catch-up with the clocks having gone forward. After all this activity the shed has become very untidy and we're only at the start of the season. 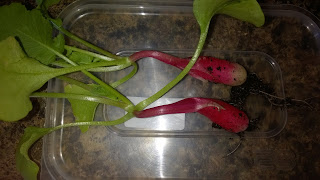 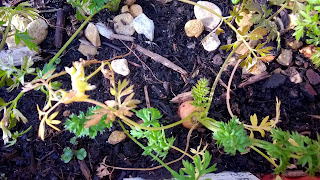 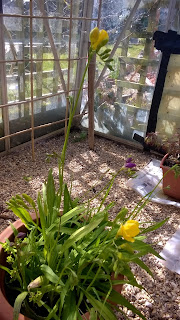 and the 'For Your Eyes Only' rose has new growth. 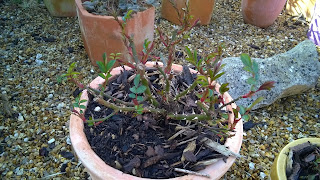 I watched Countryfile this evening and we have storm Katie coming in overnight and tomorrow, then it looks like a promising week ahead so hopefully I can make more progress in the garden. I hope you all have a good week, it's going to be nice having the extra hour of light in the evenings.
Regards,
DD
Follow me on Twitter @daisydigga.blogspot.co.uk
﻿
Posted by Daisy Digga at 20:28