Dorset Garden Diary - A Productive Week and a Bad Back

Last Sunday night was a wild one thanks to Storm Katie. No serious damage done, just one of the cloche covers blew off and one of the shed doors blew open.

Monday - 47F 8C and extremely windy for most of the day. It did rain a little this morning but soon cleared and it's been quite a nice day. I fed the birds and the fish, then potted up the tomato plants into individual holding pots until the final planting. Yesterday I did the first sowing of peas direct into the ground and today I put some in pots - we'll see which grows the best. The courgettes are growing fast, I checked when to plant them on and the book says not until May...they will be triffids by then!

My next job was to sieve the garden compost for the potato bags. It was hard going as the compost was saturated from the overnight rain. I managed to do about a third then my back started twingeing so I stopped. I re-planted the potatoes I wrongly planted last week then planted up the maris peers. Appparently, Easter is the traditional time to plant potatoes but not this year as Easter is early...tell that to the maris peers, they were more than ready! I did have a pic but I accidentally deleted it...oops. I have planted them in different ways and we'll see which is more successful. They are all in growing bags 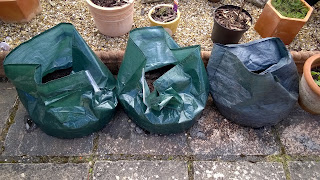 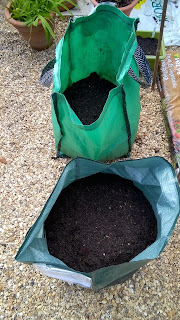 In two of the bags I have used peat free organic compost plus the sieved garden compost. One bag is in the greenhouse until the weather warms and one is outside. For the other two bags I used multi-purpose compost and potato fertiliser. Again, one in the greenhouse and one outside. Also, one of each has three in and one of each has two in so I can also see if there is any difference in size. There are also ten pentland javelin potatoes to plant but I didn't have the energy. Second sowing of radishes and spring onions are in the greenhouse. Although I read books for advice and follow Gardeners' World, sometimes I just like to go by instinct, with what feels like I needs doing - intuitive gardening.

Tuesday - a gorgeous start to the day 45F 7C, windy but not as bad as yesterday. A couple of men from a drainage company we use came to sort out our blocked drain. With the help of a camera down the manhole, they traced the broken pipe not to where we thought by the apple tree, but near the greenhouse and pond. 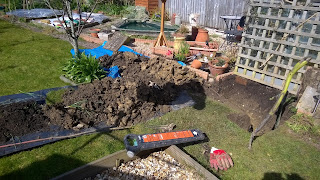 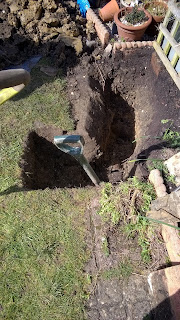 That was more than a bit worrying as I didn't want the pond disturbing but thankfully the broken pipe was about a foot away from the greenhouse. But then they had to dig nearer the greenhouse to try and find the next piece of pipe to attach it to. Anyway, long story short, they managed to fix it without any major disruption (thank you guys!). The culprit was part of a tree root 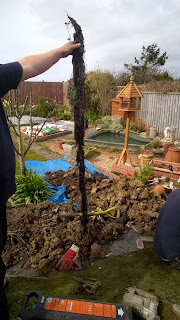 In fact, the whole of the pipe for about 40 metres was full of tree roots! In the afternoon, just after they had mended the pipe and were about to fill in the hole it started to rain, then hail, then lightning and thunder. Under the topsoil is thick clay so you can imagine the mess, and the area quickly turned as slippery as an ice rink but, six hours after their arrival, the garden was back to normal. 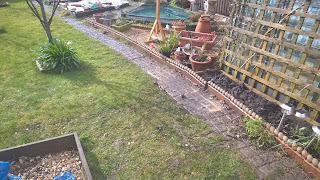 The temperature in the greenhouse at lunchtime was 60F 15.5C.

I sieved more of the garden compost, it's looking good - rich and full of worms (which I put on the garden - using gloves, obviously, too squidgy for me!). I topped up the potato bags with more soil as I don't think I planted the potatoes deep enough. There are more flowers on the freesias 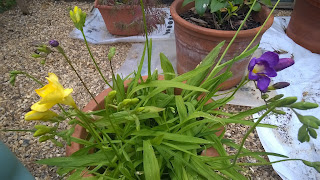 and...just come into bud and flower over the past couple of days are the fritillaria (snakes head). 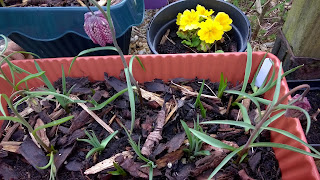 I wondered what had happened to them! See, it's more exciting not being organised, you get all these little surprises.

Wednesday - another sunny morning, slightly colder 43F 6C. I was out all morning but before I went I put the sweet peas, salvia, and pak choi outside to harden off  (took them in at 4pm as it was starting to get cooler and there could be a frost tonight.) This afternoon I re-potted the samphire and some of the celeriac from the propagator then planted half of the pentland javelin potatoes (these are a good all rounder and produce early). I have planted them in a mix of peat free, multi and garden compost. There were over a dozen sparrows feeding on the feeders late afternoon plus blue tits. Some of them were also splashing around in the bird bath...happy birds.

Thursday - and yet another sunny morning (we are being spoilt this week) and a cold 40F 4C but no frost. By midday the temperature in the greenhouse was reading 72F 22C! I potted up the pak choi and planted the remaining pentland javelin potatoes into potato bags. 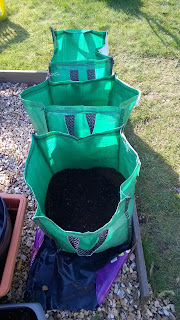 I needed to put them into their growing positions but became impatient waiting for help so I decided to do it myself...not a good idea. I'm just hoping that I won't be needing the osteopath this early in the season! The pond surface was rippling with the fishlings for most of the day and some of them are starting to change from black to gold on their bellies. I received a parcel from a well-known internet supplier today whose speciality is over-packaging - I'm sure you know who I mean. Well, they didn't disappoint, but it's all good fodder for the compost heap. This afternoon there was a magpie on the bird table despite our efforts to make it difficult for them but I have another cunning plan to try. I put the hardening-off plants back in the greenhouse again this evening and covered the potato bags. The seedlings in the ground are already protected with a cloche.

Friday - thick frost this morning and a temperature of just 38F 3C. The blue tits were in and out of the nesting box most of the day with bedding materials. The watercress has peeked through the surface (grown from the seeds of last year's crop) and four of the newly sown sweet peas. 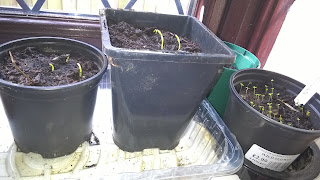 I didn't do much today as I was resting my back, but hopefully I will be fit for tomorrow. Another cold night forecast. I watched an episode of Big Dreams Small Spaces this evening. Apparently I don't prune the olive tree, just take off the dead leaves and branches; with the lemon tree just scrape away the top inch of soil in the spring and replace with new compost (loam based); seeds sown have to be kept moist all the time which I think do (mostly) and, what I didn't know, is that the smaller the seed the nearer the surface you sow it. But the best news of all...chardonnay grapes are easy to grow in a sheltered sunny spot. Well...it just so happens that it's my favourite tipple and there is a sheltered sunny spot at the side of the house!!

Saturday - a gorgeous start to the day 41F 5C and the sun shone all day, it was only the wind that kept the temperature down. At lunchtime the greenhouse was 70F 21C. A busy day pottering. Him indoors steadily worked through some of his to-do list including putting up netting on the back fence so the clematis and sweet peas will have something to cling to as they grow, taking me to buy yet more multi-purpose compost (it was on offer) and I also got a free fuchsia (blue angel): 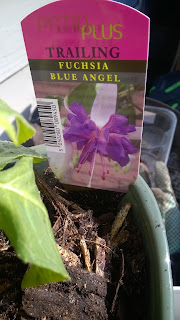 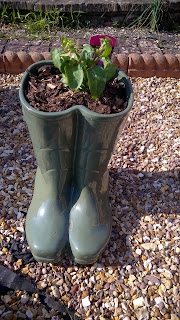 He also gave the garden a much needed soaking this evening. There is plenty more on his list for the coming few days. I potted up the courgettes and have put them in the greenhouse until the risk of frost has gone 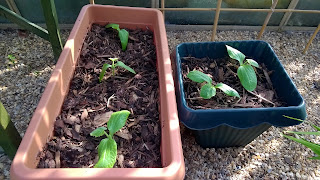 The freesias are really opening up now - glorious 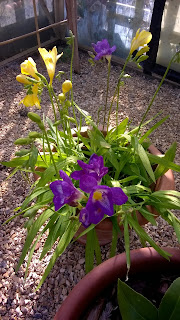 Sunday - a milder morning 47F 8C and no wind, cloudy though. The greenhouse cucumbers have been busy overnight: 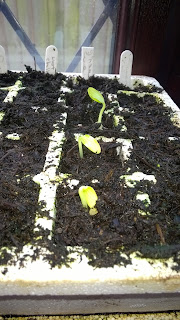 I'm still aching from my busy week so I am going to take it easy today...no, honestly, I definitely mean it! By 9.30 the wind had picked up and by midday it had died down again. Few bits of drizzle in the air. I fed the fish, the frog spawn is changing in shape and becoming more oxygenated (near the middle of the pic) 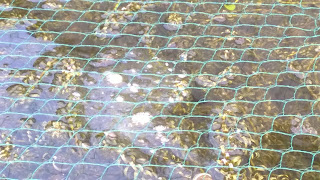 then I topped up the seed feeders. There was lots of seeds on the ground underneath, it looks like the sparrows and blue tits are being picky with what they want to eat - mealworms, sunflower hearts and suet sticks - and throwing the rest on the ground as pigeon scraps! I potted up the cucumbers 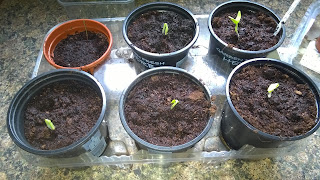 and, on a stroll round the garden, noticed that the shallots are looking healthy. 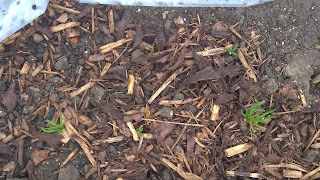 Well, that's it for this week. See...I am taking it easy. Heavy rain coming in tomorrow and maybe thunderstorms, then it's going to be a mixture of sun and showers. Have a good week, I'll try not to overdo the lifting!