Dorset Garden Diary - Did I Sow the Runner Beans or Did I Dream It!

It's been a productive week but I've still not been able to plant out most of the seedlings as the temperature has dipped at nights - hopefully next week.

Monday - the day started cold and sunny (42F 5C ) but the promised warm up never happened and by the afternoon it was cloudy and cold. Even the greenhouse didn't get past 58F. The radishes I'd planted in a large pot are being eaten by slugs, so I've now planted them in the garden. I sowed sea kale, chop suey greens and verbena bonarienses and did second sowings of pak choi and kale. I was going to plant out the sweet peas that are raring to go but in the end decided against it. The unknown potatoes and the maris peer are growing nearly two inches a day whereas the pentland javelin I planted a couple of weeks after are yet to show.

Tuesday - sunny and slightly warmer by one degree at 43F 5C and by 10am it was 53F 11C. The garden was full of small birds during the morning - robins, blackbirds, house sparrows and blue tits - and the air was filled with song - maybe it was National Birdsong Day! I planted out the spring onion seedlings (I hope they survive the cold nights), made a second sowing and did the fourth sowing of radishes. Hardly a cloud in the sky all day. The primroses are looking great: 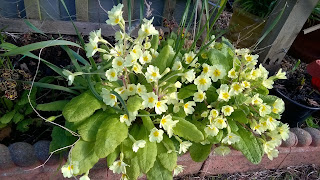 Wednesday - another sunny day 48F 8C but there was a bitterly cold wind. Still no sign of the fish. This happened last year, a dip in the netting covering the pond and then we didn't see the fish for weeks - we thought the heron had got them. When they finally reappeared they had the fishlings in tow. I covered the potatoes with soil again as they had grown through overnight.

Thursday - and yet another sunny day, we're being spoilt here, and a little warmer at 48F 8C. I just pottered today as a cold snap is forecast for the weekend so can't plant anything out; the greenhouse is full up with seedlings trying to break free. Plum blossom appeared overnight, it's so pretty (bluebells in the background) 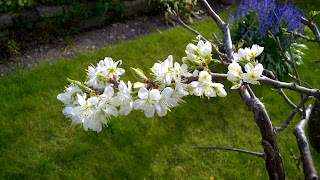 and the quince blossom has opened up - again very pretty 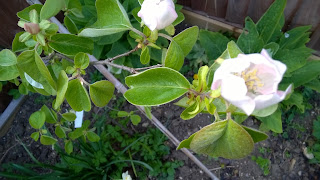 there is activity on the hazelnut tree. 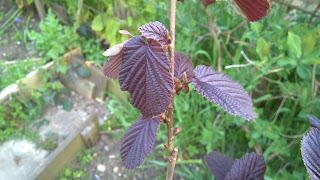 and we have one tulip - yes, just the one. 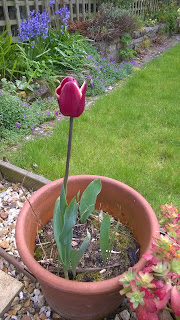 Friday - a cold one today 43F 6C and a bit of a shock after the past couple of days. We had heavy rain for most of the day. The garden certainly needed it and it saved me a job. The unknown and maris peer potatoes had pushed up through the two inches of soil again last night so now I'm letting them grow on (as per Monty Don's instructions). I watched Gardeners' World this evening and the only job for the weekend that applied to me was cut back the sage and I've already done that. My free Grow Wild seeds arrived from the Royal Botanic Gardens, Kew today so that will be a job for next week 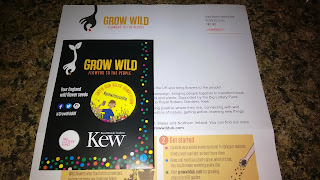 Saturday - another cold one 43F 6C. A day out of the garden today but I did top up the bird feeders around 9.30am before I went out and when I came back at 7pm both feeders were empty - it's amazing how much small birds can eat in such a short time 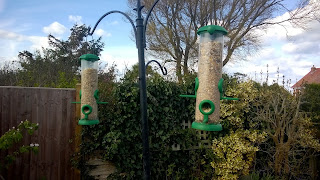 Sunday - cold, sunny 43F 6C and a chilly wind. My day started with a senior moment. I was convinced I had sown the runner beans, but I couldn't find them anywhere. I checked the trays in the greenhouse - nothing. I thought, maybe I'd just dreamt I'd sown them, but I was sure I had actually done it. When I checked the seed packet it had been opened so yes, I had sown them. I checked the greenhouse again but couldn't see them. I stood there looking at the pots and trays, willing them to appear, then I spotted the lid of the propagator covering a seed tray on the bottom shelf. I lifted it up and there they were. Thank goodness for that - I thought I was losing the plot!

My plan for the morning was to visit the garden centre to get more bird seed (it seems I spend more on their food than ours, but they're worth it!), weedkiller and a couple of plants for the cottage garden. I put the first two in the trolley then went outside to browse...and this was the result: 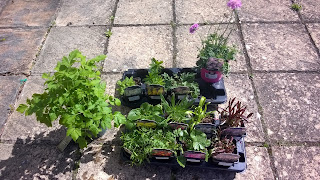 Back home I opened the greenhouse and put the seed trays outside then sprayed the front drive with weedkiller, washed and cleaned the bird feeders and topped them up. The temperature reached 65F 18C in the greenhouse. It's been a lovely day but chilly when the sun went behind  the clouds. I pottered for a few hours tidying up and taking note of what I need to do next week. I had to water the pots as they were dry even though it had rained on Friday.

I watched Countryfile this evening which had an interesting Shakespearian theme to it. The weather for the week ahead generally is not good, much colder than it should be but it looks like we could be lucky here in Dorset although I may have to give the garden a good water as not much rain coming this way.  Have a good week, stay warm and catch up next Sunday. I'll leave you with tonight's sunset: 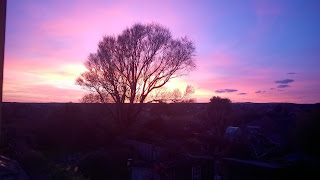