Dorset Garden Diary - All of a Sudden It's Starting to Happen

I hope it's been a good week for you all. The garden appears to have gone into triffid mode - all of a sudden it's starting to happen which is very satisfying and exciting.

Monday - 52F 11C and sunny. Clouded over now and again during the day but pleasant to potter in. My first job was to feed the fish who were ready and waiting. The fishlings are noisy when they eat, a sort of sucking, clicking noise that can be heard across the garden. The seed feeder had fallen over so I fixed that and moved the two daffodil feeders deeper into the trees so the magpies and pigeons can't get to them. I modified the bird table yet again 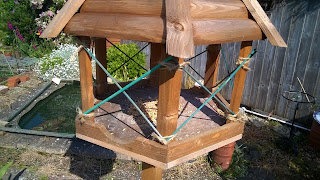 so let's see if they can get on now. I had to re-pot the chop suey greens as I'd put them in a pot without any holes in the bottom (I should have checked before I put the gravel in the bottom!) and they were swimming in water after yesterday's rain. I potted up the tiny verbena bonariensis seedlings then cleared all the tall grass from around the cottage garden (for some reason it's growing everywhere this year) and tidied up the dying daffodil leaves.

The first flower has appeared on the courgettes (exciting) 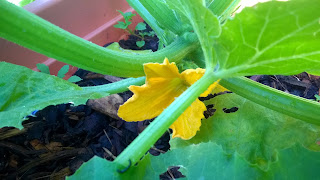 In the cottage garden the white daisies are in full bloom 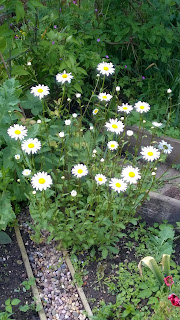 Delphinium black knight is in bud 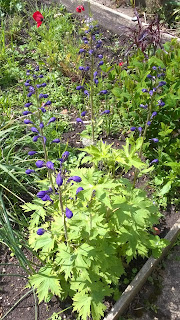 in the front garden the irises are in flower 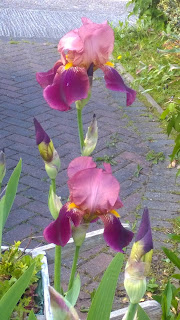 I have no idea what it is although I obviously planted it! Can't wait for it to flower 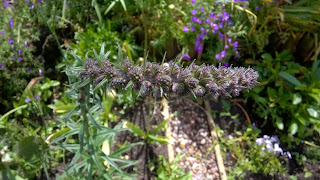 And the foxgloves (digitalis) under the arch have started to flower 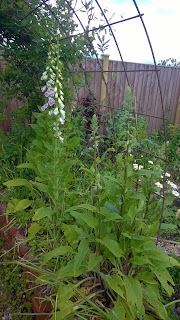 Final job of the day was dig out the Spanish bluebells from around the rosemary bush. This took an age as the bulbs are over 8 inches deep. I still don't think I have them all so I'll have to move the rosemary and dig them all out properly.
Tuesday to Thursday we were away in Chantilly, France for a couple of days. We stayed in an amazing B&B which had a large lily pond, 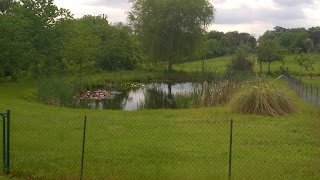 it was a haven for frogs, not that we saw any but they were serenading each other all day and night!
Friday - a sunny start, 55F 13C. Rain was forecast which the garden needs but none appeared. Amazing what's been happening in the garden over a couple of days. The maris peer potatoes are flowering 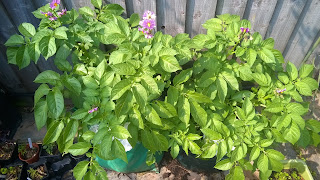 the rescued azalea is looking amazing 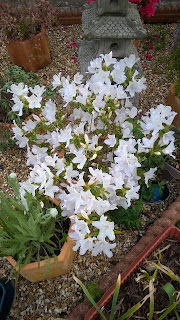 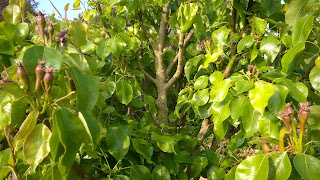 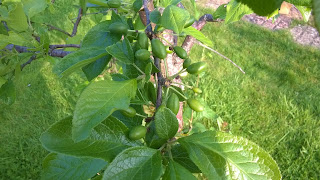 (they can have the cherries as they're sour). I thought the baby blue tits had fledged because I hadn't see the parents but they soon appeared, in and out every ten seconds or so. There are more flowers on the courgettes 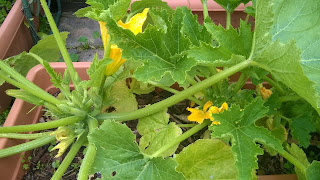 and the delphinium black knight has come into flower. 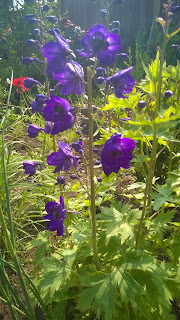 Saturday - another 55F 13C start and a gorgeous day reaching 63F 17C, just the right temperature for gardening. It reached 80F 27C in the greenhouse mid afternoon. It was a long and busy day:- I secured the cucumbers and tomatoes with string to canes, the first flowers are appearing on the tomatoes 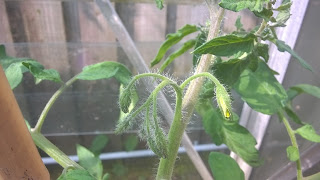 I then picked some radishes for my salad 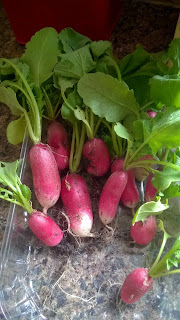 I have an abundance of them at the moment - not doing so well with the spring onions though. I planted some tomato, cucumber and gherkin plants in the garden, this is to see how they grow in comparison to those in the greenhouse. I also planted out the squash, more runner beans and the next batch of peas; potted up the fennel and white daisy seedlings and sowed more beetroot amongst the tomato and gherkin plants. I pulled up more pak choi that has bolted. Gardeners' World mag arrived yesterday and it appears the reason they have bolted is I grew them too early so I'll try sowing more and see what happens. Planted ragged robin and antirrhinums in the cottage garden then spent over an hour weeding it. One of the grasses that I pruned in the spring hasn't grown...think I should have left it alone, I'll have to replace it. It's filling out nicely and starting to look good. 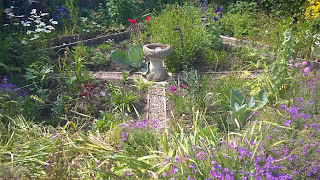 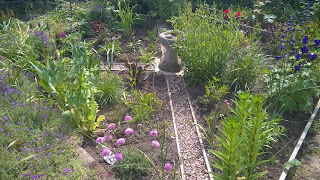 There was a surprising discovery whilst weeding - why do I have kale and carrots growing in there?

I went into the garage and there's been a spider's web on one of the windows for a few months that I've left, but now it's almost halfway across the window and window sill. I got a bamboo cane and removed the web whilst the occupant (first time I'd seen it and not small) dashed about in indignation. When I went back in later the occupant was on the window sill where the web had been. This time it didn't scuttle off, just sat there looking defiantly at me because I'd destroyed it's web. Not an hour later I had another wildlife encounter...I came indoors to get something and heard a thud in the conservatory. When I checked it out there was a robin banging into the glass doors trying to escape. Luckily it was in there and not elsewhere in the house, although I'm baffled as to how it flew in the open kitchen door and then turned left?? Anyway, I shut the kitchen door then went into the conservatory to open the double doors. The robin, now perched on one of the house plants, watched me as I unlocked the doors and pushed them open. It then looked at me as if to say thank you and flew off. So...one bad deed and one good deed...I think that evens out my karma.
Sunday - only 53F 11C this morning but sunny and soon warmed up to a lovely 68F 20C (reached 85F 29C in the greenhouse this afternoon). My first job today was a trip to the garden centre, I wanted to replace the ornamental grass I'd pruned and probably killed, get some more perennials and ground cover. I must admit I was quite restrained in my purchasing 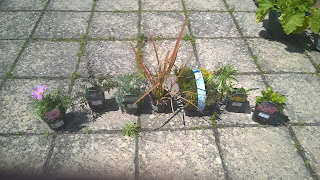 In no particular order:- cosmos sonata pink, polemonium purple rain, artemisia Powys castle, phormium, mixed winter heathers, lobelia salmon and coreopsis early sunrise. I've put them into water for planting out tomorrow. I fed the fish a few times today, they're nowhere near as big as the ones we saw in Chantilly which had to be at least a foot long (no, I'm not exaggerating!) 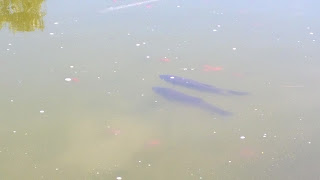 I mowed the lawn (yes, I know it's him indoors' job but he's working), trimmed the edges then put the grass cuttings in the potato bags to cover the lower leaves and keep the soil moist. I then cleared out the bed under the plum tree, filled it with top soil and filled with plants, all looking much tidier. 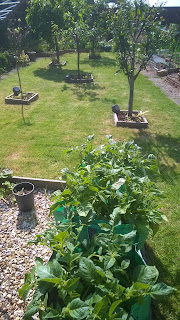 I moved the courgette trough to get to the potato bags and noticed that, since yesterday courgettes have appeared 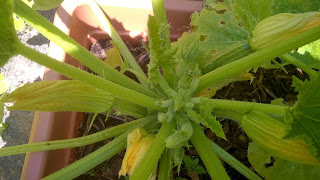 The digitalis and aquilegia under the arch are looking colourful 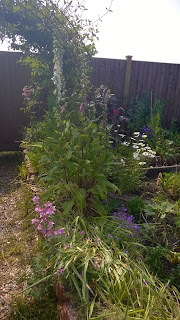 and there are buds on the arch clematis 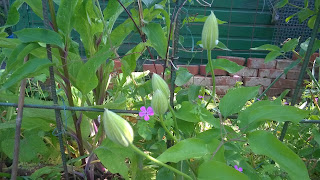 Watched the weather this evening and it's a bit touch and go whether we have rain or not this week so it looks like I'll be spending my evenings watering the garden. I hope you have a good gardening week and catch up next Sunday.
P.S....the spider in the garage has been working overtime - a new web has already formed!
Regards,
DD
Follow me on Twitter @DaisyDigga
﻿
﻿
Posted by Daisy Digga at 21:03