Dorset Garden Diary - At last a Squash and a Grateful Azalea

It's not been very warm for most of the week but it has felt humid at times. Rain was forecast during the week but failed to arrive until the weekend - I don't think the weather forecast applies to us here.

Monday - a chilly 48F 8C start but soon warmed up and in the afternoon the greenhouse reached 77F 25C. I dug out all the bluebell look-a-likes from under the fruit trees which took over two hours then scooped out all the stray roots. There wasn't much soil left so it was a trip to the garden centre to buy some top soil and more compost and...while we were there...bought a couple of shrubs, two ladybird poppies, phlox and ground cover plants for the cottage garden which can grow in between the taller perennials and hopefully keep the weeds at bay, and some mimmulus scarlet which were free. 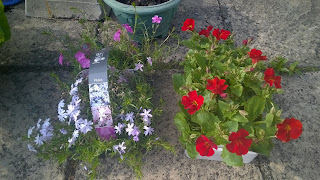 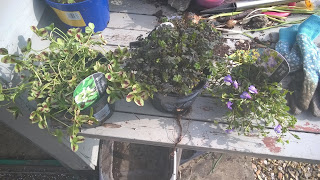 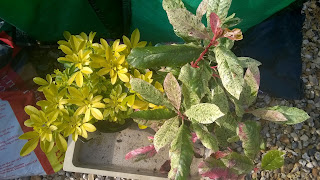 We also stocked up on bird food and bought a couple of solar lights. It's impossible to just go and buy just what we need! When we got back home him indoors unloaded the car then moved the bee house on to the back fence and staked up the quince tree. I filled the tree beds with top soil then split the primulas and planted them together with thyme, saxifrage and aubretia. It looks a bit bare at the moment but they will soon grow and spread. I thought I caught a glimpse of a baby frog but wasn't sure, but we did have all three generations of fish feeding this afternoon.

Tuesday - slightly warmer at 50F 10C. I planted out some of the ground cover in the cottage garden and the ladybird poppies, 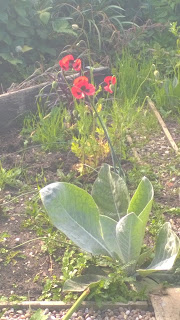 watered the veg in the greenhouse with feed then it was off to meet the family.

Wednesday - back home this evening thinking we wouldn't have to water the garden for a few days because it had been raining most of the way back but the ground here was dry. Him indoors has had the all clear on his foot which is great news but...the list will have to wait until he's caught up with other things, like work. Excuse me?? I checked the greenhouse and, at last, the squash has finally broken through, I'd given up on it to be honest. I'm only growing one because I'm not sure how much fruit it will yield and what I'm going to do with it. 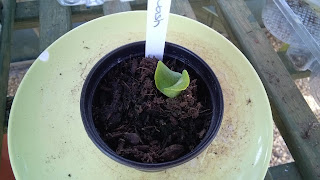 The aquilegia and marigold seedlings are starting to appear as has another runner bean (just the one).

Thursday -50F 10C start and sunny but clouded over later in the day. It was quite warm out of the wind. I sowed more radish and spring onions in the garden. The carrots and parsnips are coming along very slowly as are the leeks. Some of the pak choi I planted in the garden has started to bolt yet others haven't - strange and annoying. I sowed more parsnips in a seed tray, planted up a couple of gherkins in the greenhouse to replace the ones I'd lost. The sweet peas are continuing to bloom despite the coolish weather: 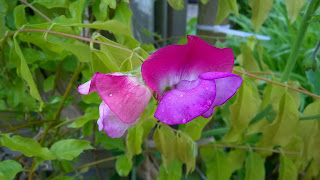 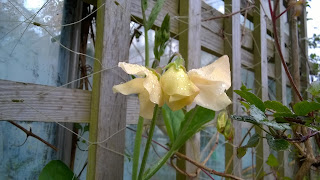 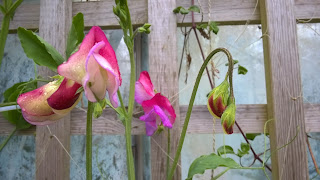 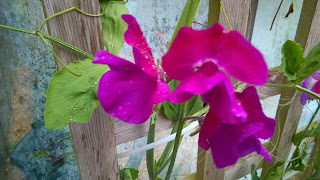 Him indoors saw a magpie on the bird table aaarrgghhh!!! No sign of the fish today.

Friday - slightly warmer start, 51F 10C and humid. I was out all day so nothing done in the garden. Watched Gardeners' World in the evening, the only job for the weekend that applied to me was skimming weed off the pond and there isn't much. Monty explained that iris's have to be planted with the rhizome above the ground and facing the sun. This is so it picks up the heat during the summer  then produces masses of flowers the following year so I'll give that a try. The azalea I rescued from a garden centre a couple of years ago (it had been left in a corner to dehydrate and wilt) has come into flower and showing it's gratitude 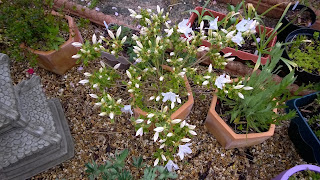 Saturday - 51F 10C (consistent if nothing else) and rain. Yes, we actually have rain that was forecast! I have three tomato plants that will eventually be growing in the garden and not the greenhouse so I put them outside today to harden off and have a good soaking. Caught a huge snail chomping away on one of my gherkin plants...not for long! I planted up a runner bean plant that has hardened off. For some reason they are growing in dribs and drabs. I put the phlox in the cottage garden - candy stripe, McDaniel's cushion and emerald cushion blue. It's filling up now, just waiting for the plants to start flowering. 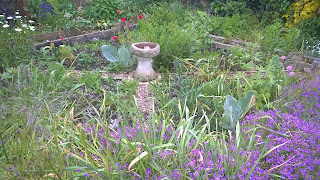 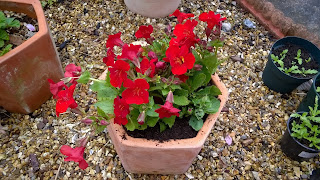 Fed the birds and moved the feeders. There was no sign of the fish but I put some food in the pond and they soon appeared.

There is some nice unplanned, complementing colour in one part of the garden: 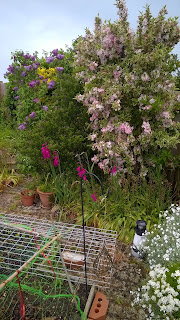 Sunday - and again 51F 10C (I did wonder if the thermometer was stuck) but it was showing 57F 14C, not very warm. Cloudy and humid for most of the day. I potted up fennel seedlings that were ready and sowed some more as they are taking an age to germinate. Also sowed next batches of radish and spring onion and parsnip, forgetting that I'd already done it so we could be having a parsnip explosion this year (last year it was beetroot!). As I was pottering I heard a noise like tyres on smooth tarmac. As it got louder I looked up and a huge flock of small birds whizzed by overhead. I fed the birds and I have another idea for the bird table which I'll try tomorrow. Around 5pm it came over a bit black and we had a hailstorm followed by torrential rain and thunder - that'll save me watering the garden for a few days. 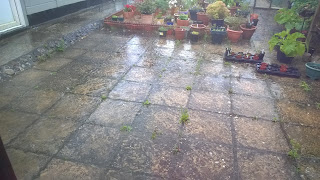 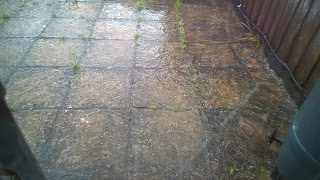 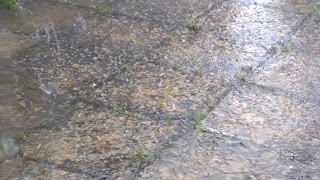 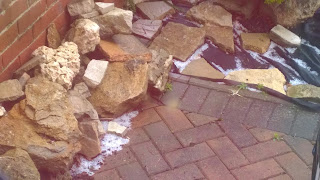 Then as it was stopping the sun came out﻿ 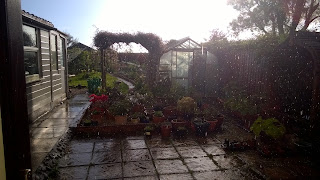 Here's a little montage of progress:
The squash 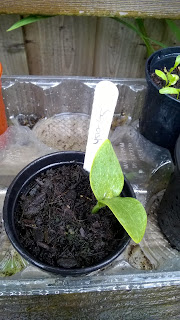 Basil happy in the greenhouse 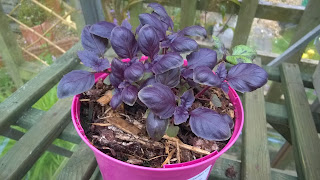 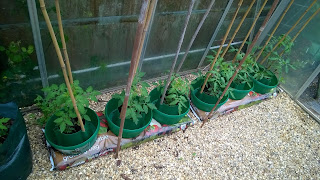 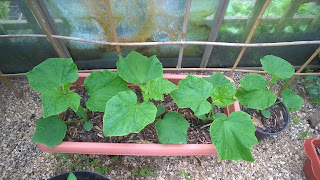 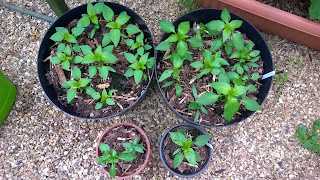 And the apple seeds I sowed on the off chance 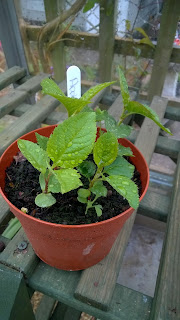 The apple tree in situ at the moment better buck it's ideas up and produce some fruit this year as there are, at the moment, six seedlings waiting on the sidelines!

As usual I watched Countryfile this evening for the weather which, apparently, is getting colder for a few days then warmer and rain. I have taken in the tender seedlings for tonight in case they are right but, as they aren't always, my Daisy Digga Dorset forecast is...pleasantly warm and dry all week! I hope the weather is kind to you where you are, happy gardening and catch up next Sunday.