Dorset Garden Diary - And the Stars of the Show This Week are the Cucumbers, Gherkins and Tomatoes

So...the forecast for this week was heavy thundery showers. I was away from Monday lunchtime until Thursday afternoon so, before I went,I watered and fed the plants in the greenhouse then decided to give the pots and the veg beds a quick water, just in case. I'm glad I did...when I arrived back the ground was dry and the plants in the pots were wilting. I did a recce of the garden, it's amazing how quickly the plants and veg grow in three days. The lawn needs mowing and has clover growing in it but I'll leave it for a while as the clover is good for attracting the bees. I fed the fish, they sulked for a few minutes then they were all scrabbling to feed. I watered the tomatoes in the greenhouse and was just about to water the garden when there was a rumble of thunder and the heavens opened.

Friday - 61F 16C, cloudy and muggy. In the afternoon we had more thunder and heavy rain but not for long. I didn't have much time to do anything in the garden apart from feeding the fish three times - each time they were on the surface within seconds.

Saturday - 61F 16C again this morning and sunny, but the promise of a summer's day didn't materialise as it clouded over and didn't get any warmer. But despite that, much accomplished today. First on the agenda was to collect my mobile phone which has now been repaired, everything has been wiped off it except, surprisingly, my pics which are still on there. When I came back I had a list of jobs to get through. I pruned the horizontal shoots on the greenhouse cucumbers so they will put all their energy into growing the cucumbers which are doing extremely well...very pleased. 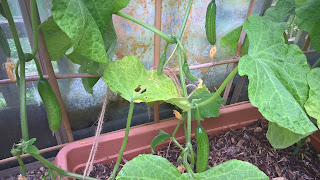 Next I tweaked out the cordons on the tomatoes (I must be psychic as this was one of the jobs to do on this Friday's Gardeners' World!), these are the tiny shoots that grow in the right angle gap between the main stem and the horizontal leaf stalks (again so the plant can put all its energy into the tomatoes) and I secured them to the bamboo supports. And...the first tomatoes are forming 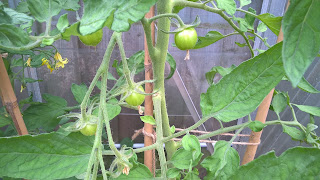 I added more grass seed to the trays already growing as it's a bit sparse but it has come on well. 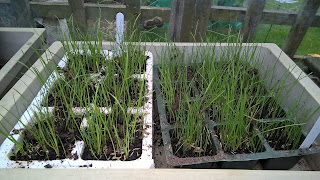 Potted up the hot chilli pepper plant that is lagging behind the rest of the crop, cut away all the yellowing leaves from the courgette plants (there are more flowers appearing) and I planted out another courgette seedling that has just surfaced.

In the cottage garden I planted allium bulbs that I had over-wintered in pots, put in the verbena that I've grown from seed and pulled out some of the white daisies as they are starting to take over. It's looking good 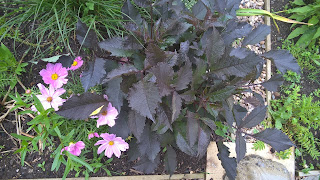 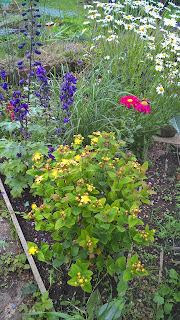 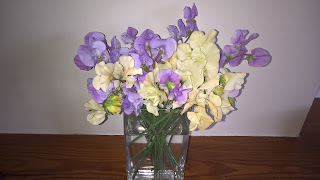 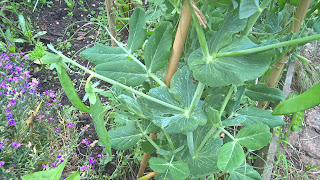 and my final job of the day was to weed the veg beds then plant out the remaining carrots, parsnips and leeks.

Sunday - 58F  14C, cloudy, dismal and damp and by late morning light rain started which is good for the garden but not me and by late afternoon we were shrouded in sea mist. When I feed the fish I always put the food in the same part of the pond (the 'dining' area) and today they were there waiting...it's not just Pavlov's dogs that can be trained! I checked the spud bags and tied up some of the falling stems then started to tidy up the small wall by the cottage garden. This is before 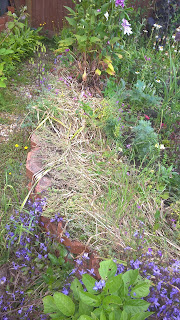 The earth filled with big black ants, indignant that I'd disturbed them. I also disturbed a bee that must have been sheltering out of the rain and a frog (good to know there are frogs in the garden because I haven't seen any in the pond since the spawn). It's looking much tidier now, I have trimmed the aubretia and hopefully it will come into flower again. 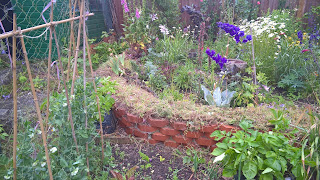 Around the garden:-  the achillea when it starts flowering is white then changes to yellow 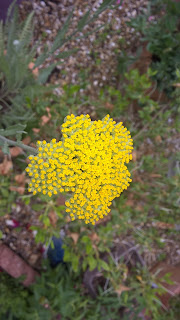 The lionheart lilies are in bud 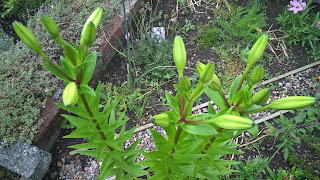 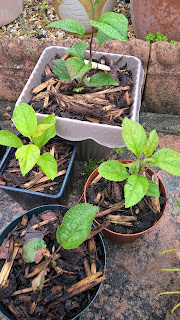 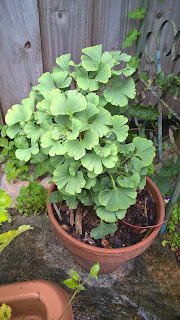 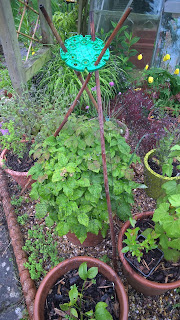 And...I've just been  in the greenhouse to water the tomatoes and look...the first gherkins, him indoors will be delighted! 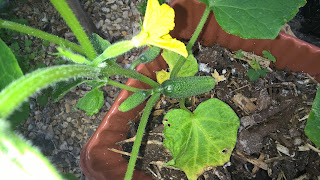 Countryfile was back this evening and the weather is very wishy washy for the coming week...flamin' June it isn't. Lukewarm temperatures, cloud, rain and drizzle. The upside of this being I won't have to water the garden. I hope the weather is better where you are this week, catch up next Sunday.