It's been a bit of a disjointed week with the garden as I've had other commitments, but I still managed to cram in quite a lot.

Monday - one of my days in the garden started at 56F 13C and only reached 68F 20C and cloudy most of the day. I planted out the ragged robin seedlings (good for bees), a clematis and split some of the primulas and re-planted them around the garden. I moved the acer (Japanese maple) out of the greenhouse and put it in a sheltered spot in the garden, hopefully the leaves won't fall off like they did last year. I pruned the rosemary to a third of it's size and planted herbs and primulas in the bed. Watched last week's Gardeners' World and Monty had an ingenious way of repairing patches of grass - grow the grass seed in seed pots then, when it's fully established you can repair the lawn where necessary. It also stops the pigeons eating it all. 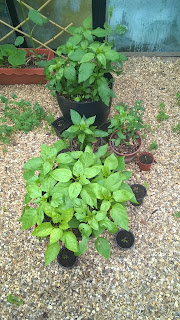 so I sprayed them then planted up the rest of the marigold seedlings into small pots and placed them around the plants to hopefully stop the greenfly coming back. One of the outdoor cucumbers has finally emerged but it's too small to plant out yet and we have the first flowers and mini cucumbers on the greenhouse plants 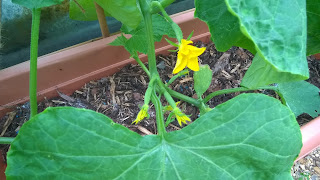 and also on the gherkin 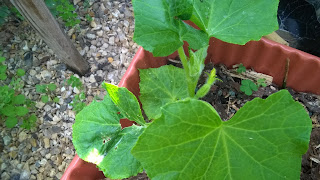 plus...this is definitely not a gherkin plant growing with the gherkins - another one of my mysteries. 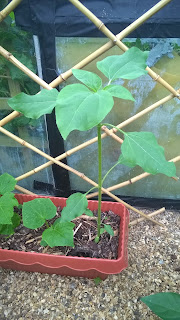 Next on the agenda was to start clearing the pathways of weeds and in the front garden the bindweed has taken hold and entwined itself around other plants. I wondered how I could put weedkiller on it without killing off the other plants, then I had a brainwave...a cotton bud - I dabbed the weedkiller on the bindweed leaves. The pots needed watering this evening as they were drying out, rain everywhere but here as usual.

Tuesday - at 5.30am it was 56F 13C with the sun rising through the mist and reflecting orange on the water in the RSPB reserve. I turned the compost tumblers, fed the greenhouse plants, sowed more courgettes although I think it might be too late for them to germinate. The runner beans don't seem to be doing too well but the peas are in flower. 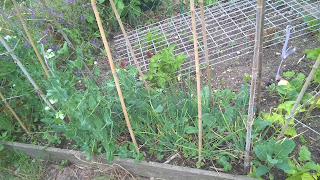 The next sowing of carrots have sprouted, I planted out half of them - think I may have sown too many (sound familiar?). I lifted the garlic bulbs as the leaves were developing garlic rust (I had to throw away last year's crop as I didn't catch it in time). I've put them in him indoors' workshop to dry out so they don't contaminate other plants...they do smell strong! 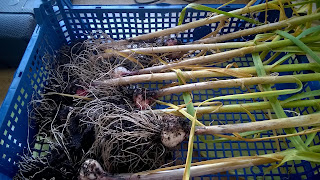 And the last job of the day was to plant a dahlia and echinacea in the cottage garden.

Wednesday - 59F 15C and sunny. One of my non gardening days but I did feed the fish in the morning and evening and they were splashing and leaping around to get to the food. I cleaned all the bird feeders and the bird table as there is enough natural food for the birds in the garden at the moment, especially for the sparrows that have been rooting through my seed pots. 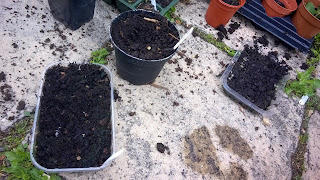 Friday - 56F 13c (consistent temperature this week) and cloudy. Yesterday was foggy and took most of the morning to clear into a humid day but no rain. It made a change to watch Gardeners' World this evening rather than recorded. Only one of the jobs for the weekend was applicable to me and that is to re-pot citrus plants (lemon in my case). They need good drainage so lots of crocks in the bottom and trim the roots before planting. Let them dry out between waterings with tomato feed and when pruning, the centre should be open. I have a small gingko biloba tree (sorry no pic see explanation further on) and apparently they are one of the most ancient plants on the planet and the water lilies (now flowering) 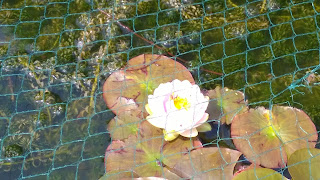 were one of the first plants to evolve. Only three jobs today - give the garden a good soaking, modify the netting over the pond to make it more secure and tie the cucumbers plants to the frame 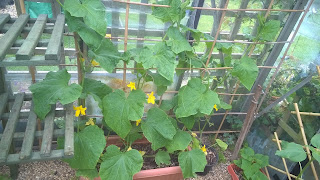 Sunday 56F 13C (wondering if the thermometer has stuck), rain to start, windy but humid and stayed cloudy most of the day. First job was to make a net frame to protect the raspberries (now beginning to form) from the blackbirds 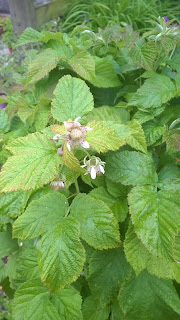 I do have a pic of the frame but I had a technology malfunction in the week, my mobile decided to develop a mind of it's own and start taking pictures and writing gobbledy gook texts without my assistance (as if I'm not capable of writing my own gobbledy gook!) so I am using one of my old mobiles and my laptop won't let me upload the photos so you'll have to bear with me until I get my phone back.

Next job was re-pot a cutting off the pineapple sage, it has good roots so hopefully it will take and grow. Fish ecstatically happy to be fed again. The rose is looking splendid 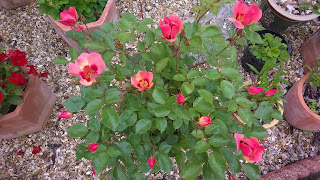 and the potato bags are bulging out, hopefully with a good crop. Still waiting for the pentland javelin to flower. 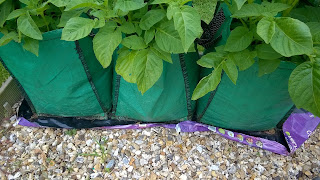 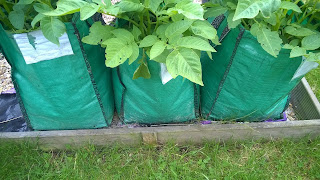 The cottage garden is filling out. This was taken at the beginning of the week, it's filled out even more now, hopefully I can show you next week. 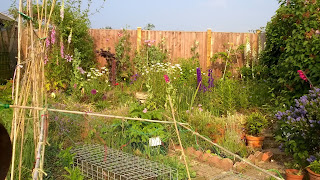 There was no Countryfile this evening because of the football. Hmmm...are we supposed to put our gardens on hold during the Euros? So instead I watched the news for the weather this week which wasn't as comprehensive but basically, it's not going to be as warm but humid with showers and thunder.
Ah...nearly forgot...it's the start of the odd shaped vegetable season, starting with a courgette 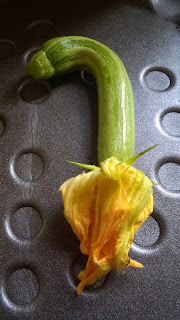 I hope you all have a good week and can get out and enjoy your gardens. Hopefully, I will be technologically repaired by next week. Catch up next Sunday.
Regards,
DD
Follow me on Twitter @DaisyDigga﻿
﻿
Posted by Daisy Digga at 20:05