Another early post this week as I have birthday commitments- where do the years go! The temperature has stayed pretty constant for most of the week so I'll omit those again this week - I'll just say that Tuesday reached 20C 68F and Wednesday started at 12C 54F...that must have been a shock for the plants.

Monday - cloudy and a bit chilly but warmed up in the afternoon. I was working today but I had to check on the spuds as it's been bugging me about some of them not flowering. A couple of the maris peer bags appear to not have any but there are some in the others and...in one of the pentland javelin bags I came across these 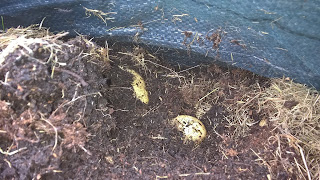 so I covered them back up and I'll empty it out at the weekend. One of the lilies out the front has come into flower 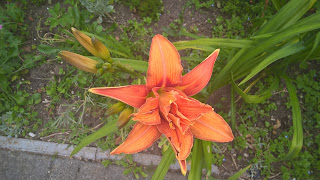 and I saw the first damselfly when I was feeding the fish. I belatedly watched the weather for the week on Countryfile and no rain forecast so I gave the garden a good watering. Thankfully I started on the veg first giving it a good soak because the hose developed a leak and had to finish the rest with the watering can. It would happen a) when him indoors is not back until the weekend and b) on a rare week with no rain forecast. Anyway, another job on 'the list'.

Tuesday - warm, humid and windy. I was working today as well. When I came home I had a stroll round the garden and the pea pods are finally filling out. I picked a few to go in my salad, they are so sweet and tender it's a shame to cook them. 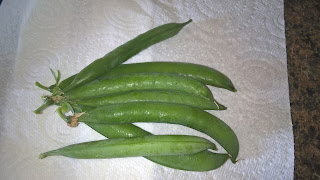 I opened the vents in the greenhouse and one of the skylight windows then fed the cucumbers, gherkins and tomatoes.

Wednesday - cold start and windy, warmed up a bit as the day went on. I sowed some melon seeds to see if they'll take (I've never grown them before) and clematis cuttings I'd procured. 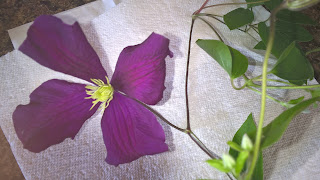 I picked more cucumbers and courgettes. The tomatoes are a nice size now, they just need to ripen. The rat man came back today and checked the traps. There is some evidence that they are still around as the bait has been nibbled at and there was a dead one in the top shed. He's left the traps down and will come back again in a couple of weeks or so.

Thursday - humid and cloudy. The fish are feeding well and the adults are staying on the surface when I approach the pond, whereas a couple of months ago they would dive under. I fed and watered the pots which took ages then trimmed off excess leaves on the tomatoes and secured the cucumber tendrils. Verbascum, lemon and olive doing well 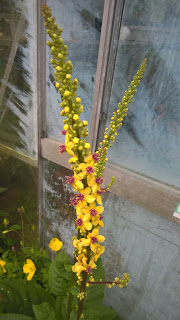 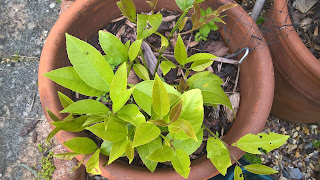 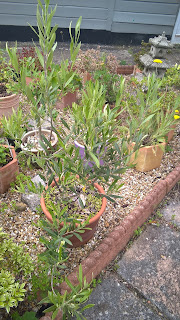 and the water lilies are pretty (him indoors' favourite) 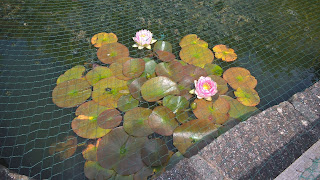 Friday - a cloudy day was forecast but actually it was quite pleasant with some sun but very windy. I still haven't had a chance to spray the rose with the sawfly deterrent as it's been windy all week. I took cuttings from the geum, pulled up a couple of the carrots I rescued last year - small but tasty 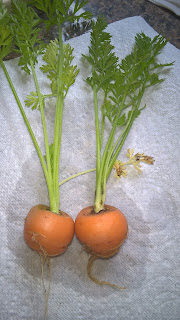 and strung up the garlic. 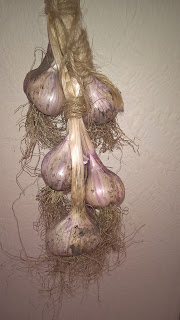 Three of the bulbs had rotted which is disappointing but it's better than last year when they all rotted. Felt a bit better after watching Gardeners' World and some of Monty's garlic had rotted as well. Cottage garden newbies doing well 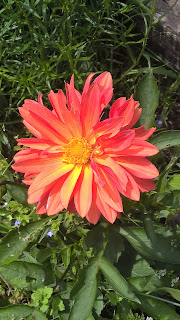 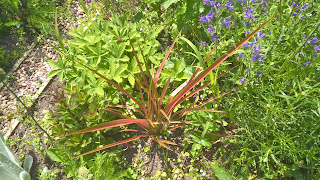 and remember the rockery plant from last week , well look at it now. I think it's a houseleek 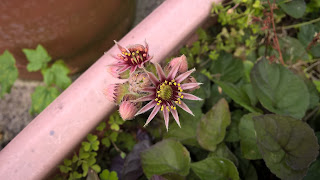 Saturday - cloudy, windy and warm all day. Much achieved today especially with him indoors making inroads into his long list. He started off by taking eight bags of garden waste to the recycling centre (our compost bins are full) then he scythed his way through the undergrowth to the back of the garden, clearing all the weeds as he went, then he cleared a path out the back to the large compost bin. The blackberries are forming so hopefully, if we have some sun, they will ripen soon. Next job was to mow the lawn and then he fixed the hosepipe. Meanwhile, I dug up a couple of the shallots (Longue) Jermor. I'll leave the others for another week as they aren't quite big enough. I've put them in the pottering shed to dry out. 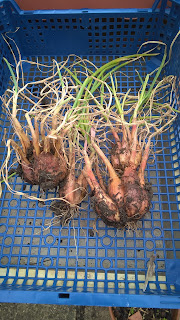 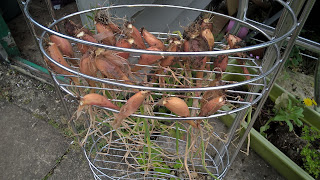 I then couldn't wait any longer and had to empty some of the potato bags. The first bag contained spuds grown from two supermarket basic whites as an experiment. 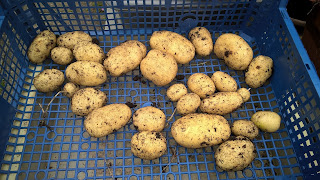 Not many but at least they grew. I then emptied the pentland javelin bags. The spuds grown in ordinary potting compost produced the most spuds, the ones grown in ericaceous compost grew the biggest and the bag containing the peat free compost yielded the least and was very dry even though it had been watered as much as the other two. But a good harvest, nearly 14lbs. 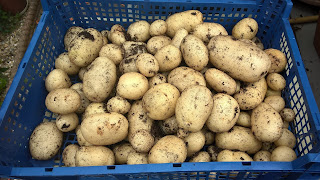 Also, the peat free bag didn't have any worms in it and there were loads in the others. I will empty the four maris peer bags next week if I can wait that long! Final job of the day was give the garden a good soaking...then we went out!

Sunday - started with light rain and windy. Just a few jobs this morning; him indoors removed thorns and weeds growing in the top bed and I pottered in the greenhouse. We found these raspberries that the birds had missed 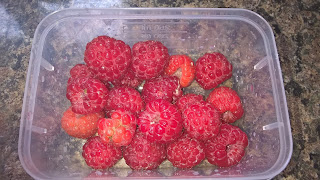 Well that's about it. I hope you all have a good week in the garden and summer visits again for a bit longer this time. Catch up next Sunday,