After a soggy start the week has dried up, warmed up and summer is beginning to make an appearance. We were away until Wednesday afternoon, visiting Kew Gardens (I'll do a separate blog on that...it's a definite must-see) and we also popped into RHS Wisley for two climbing roses - Ena Harkness (red) and Rosa Mermaid (white) - for the back fence, another rose 'for your eyes only' for the front garden, an Iceland poppy, cosmos and lychnis white robin.  The weather wasn't too bad, warm with some heavy showers.

Wednesday - amazing how much the garden grows while it's not being watched. Before we left on Sunday him indoors laid grass seed on the bald patches (not his) and immediately the birds came down for a feast but some seed had survived and he was pleased to see it has taken. I don't think it rained much here while we were away but there was a heavy shower before we arrived back. The tomatoes had reached the top of the greenhouse so I trimmed those back 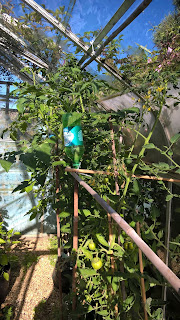 and the cucumbers are now trailing across the roof 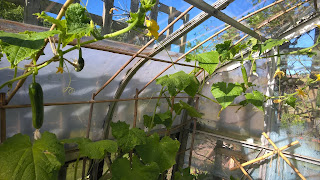 plus...you don't see cucumbers like this in the shops anymore 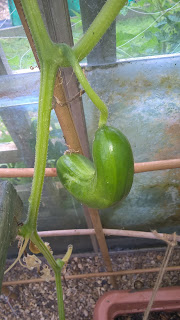 I gave them all a good watering. The cucumber seedlings have broken through and the 'definitely not a gherkin' turns out to be a budding sunflower! 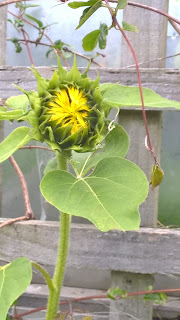 The sweet peas have also gone a bit wild 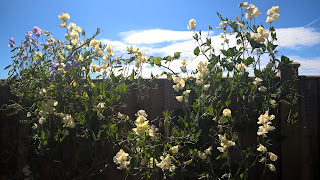 so I picked some for vases, this one is especially pretty 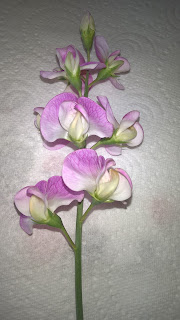 The fish were pleased  to have us back and attacked the food with relish. The fishlings started playing their own version of apple bobbing with a water snail.

Thursday - 13C 55F sunny and windy. I sowed more courgettes but not sure if they will take as it's a bit late in the season. I think I may have lost the ones that are already in situ - they dried out while we were away. Picked a couple more gherkins and prepared them for the pickling jar.

Friday - 14C 57F sunny then clouded over. Not windy today so I took the chance to spray the rose with the sawfly deterrent. I watered the greenhouse and gave the garden a good soaking and generally tidied up. The spray head on the pond pump has dislodged and rather than releasing a fine spray it's shooting a stream of water into the pond...added to the list!

Saturday - started at 15C 59F and by 9.30am it was 19C 66F and blossomed into a glorious day. I spent a few hours pottering. I emptied one of the smaller potato bags that originally contained 2 maris peers in ordinary multi-purpose compost and shop bought potato fertiliser. The yield was small at 3lb but better than nothing 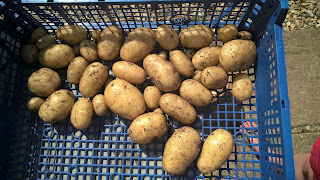 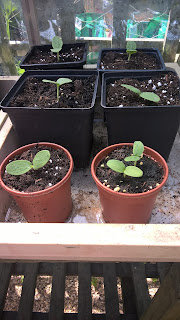 Chillies and peppers and doing very well. The bee house we put up last year is still unoccupied but I noticed this little fella prefers a bamboo cane in the greenhouse 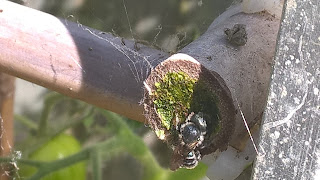 Dinner included peas, swiss chard and spuds from the garden.
Sunday - 16C 60F and rising to 21C 70F (officially) but felt a lot warmer. Greenhouse reached 82F 28C mid-afternoon. I started the day feeding the fish who were eagerly waiting. There were sparrows everywhere today flying around and over the garden, landing on everything for grubs and insects. I secured the greenhouse cues then moved the two arctic verbascum from the cottage garden as they are not flowering and leaves are huge. I replaced them with a salvia hot lips and an orange geum. After I'd deadheaded the wild basil I noticed these...the first blackcurrants on the patio bush. 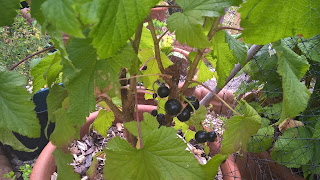 I then picked more raspberries - guess what's for dessert today! I re-potted the aster henry purple, a blackcurrant sage cutting and took another, and the buddleia cutting. I started weeding the veg beds and came across these mixed onions ready for drying 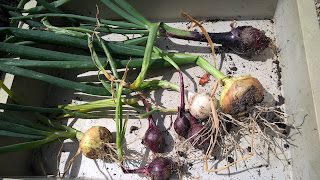 There's plenty more still growing...I've hung them up in the greenhouse 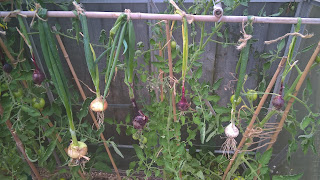 I carried on weeding and there were a couple of carrots ready. At last...my first proper carrot-shaped carrot 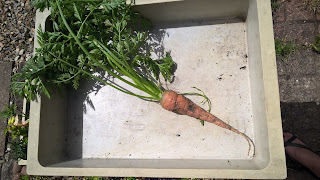 and then it was normal service resumed!! 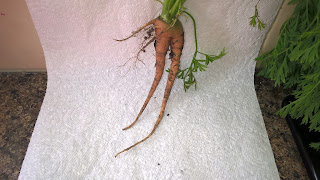 I also picked more peas that were ready. I finished weeding the veg beds, this one has the celeriac, fennel, swiss chard, lettuce and beetroot 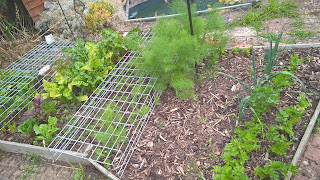 And these are the peas and runner beans 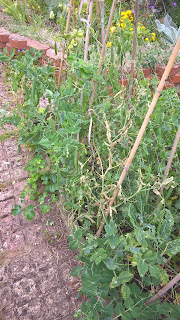 I then made a start on the cottage garden - it was getting quite warm by this stage. I came across this lovely flower that had been obscured by the weeds 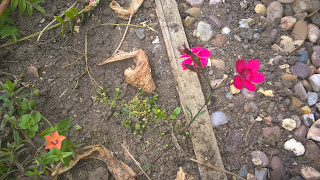 This is the sunflower today 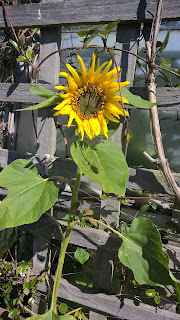 And, whilst I've been pottering I've noticed that the flowers on the achillea and the curry plant are very similar. Achillea 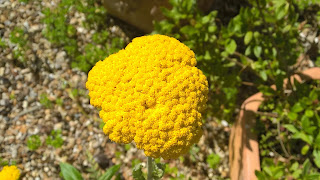 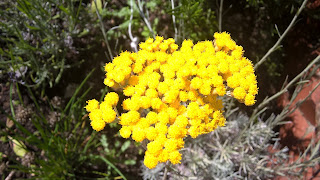 And spotted this afternoon, two more gherkins for pickling tomorrow 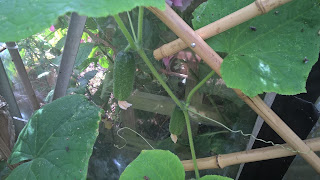 Well, after all that I decided to reward myself with a cold beer and an hour on the sun lounger! I watered the garden this evening and liquid fed the veg. Couldn't reel the hose in as the handle has broken - added to the list!
Well that's it for this week, I've enjoyed my pottering. According to Countryfile over the next couple of days we're going to have a heatwave in the 30's, a thunderstorm, then it's getting cooler although, looking at the weather map, the storms didn't apply to here so could be a dry week - I've put 'mend the hose' at the top of the list! P.S. the maris peers are very tasty.
Have a good week and catch up next Sunday.
Regards,
DD
Follow me on Twitter @DaisyDigga
Posted by Daisy Digga at 20:03