What a week it's been, almost like summer with the temperature above 74F 23C in the greenhouse at times. Hope it's been glorious where you are.

Monday - a bit colder today after the weekend. I made a start on tidying up the front garden as the weeds have taken over - I do neglect it in favour of the back, unfortunately. 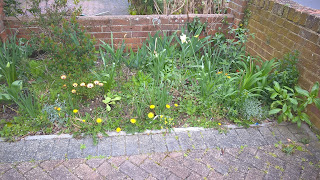 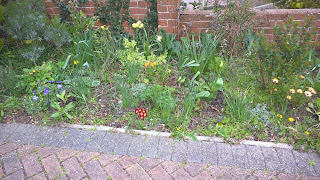 It's a bit of a mish mash because it was quite bare when we moved in so I've been putting plants in the gaps to fill it out. I'll sort it out this summer. 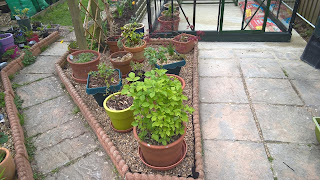 sorted out old pots and cuttings and generally tried to tidy up a bit. Unfortunately, as one area tidies another untidies...I'll call it my work in progress area! 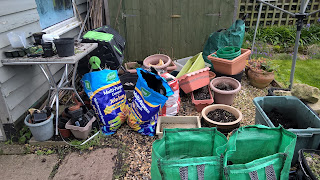 I put the sweet peas and other tender plants in the greenhouse overnight and moved the jasmine to a sheltered spot as the temperature was dipping to just above freezing.

Tuesday - apart from watering the greenhouse and putting the plants back out I didn't have time for anything else today.

Wednesday - sunny and windy. Some of the fish were near the surface so I put a little food in and they ate it. The tadpoles are still happily wriggling around. I planted the King Edward potatoes in the same veg patch as the Duke of York. Just realised what I've done, I'll have to call it the royal bed now! The Charlotte salad potatoes are in bags 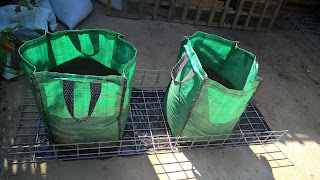 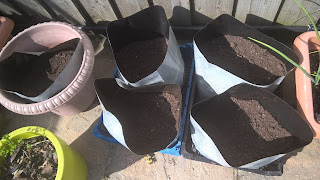 and the Pentland Javelin aren't quite ready to go in. Tomorrow is going to be seed sowing and potting-on day.

Thursday - sunny and warm, yesss!! I re-potted the tomato plants (I have fifteen!), peppers and chillies 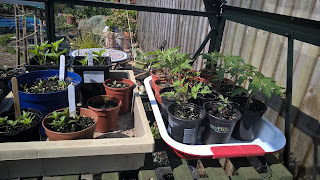 then sowed little gem lettuce, beth alpha cucumber (two of the original crop I sowed a few weeks ago have emerged but not doing much), 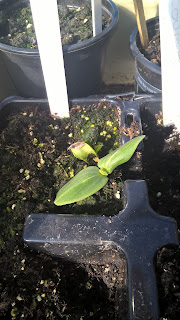 gherkins, fennel, beetroot perfect 3, dwarf French beans 'opera' and dwarf runner beans 'gloriosa daisies' (both of which I can grow in pots as there won't be much room in the veg beds this year) and cosmos 'tango'.

Friday - another cold one last night but by day it just keeps getting better, not a cloud in the sky for most of it. I deadheaded the scabious and sowed the seeds, fed the fruit bushes (blackcurrant, raspberry and blueberry) with a high nitrogen feed and the onions, garlic, kale, swiss chard and radishes with liquid seaweed. I moved the gardenia onto the gravel bed by the patio because apparently it does better in partial shade and I moved the blue hydrangea (boogie woogie) to a site with more sun. Watched Gardeners' World this evening and only a couple of jobs relevant to me which are cut back ferns to allow new growth to come through and secure climbing plants.

Saturday - sunny and warm all day. I finished tidying the front garden and planted two blackcurrant salvias I'd grown from cuttings. In the back garden I weeded most of the beds and planted out flax, nigella and verbena (grown from seed) and six violas into the bed by the pond which I'd bought as him indoors says it's looking a bit bare at the moment. 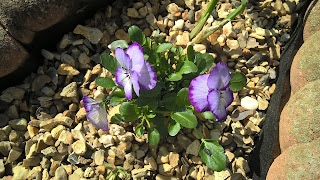 Wait until the end of the summer! I planted out the sweet peas, some by the greenhouse and more in the top bed with the climbing roses and re-potted thyme and blackcurrant sage. That was it for the day apart from giving everything a good water. I'll do the front garden tomorrow.

Sunday - not a cloud in the sky this morning although hazy on the horizon but at 2.30pm the wind got up and cloud and sea mist rolled in and the temperature quickly dropped. It cleared an hour later but stayed cooler. There were more fish near the surface this morning and they ate all the food I put in...no fishlings yet. I cut back the ferns and checked the climbers are secure. The other jobs to do on GW were divide primroses which I'll do next week and take delphinium cuttings but I don't need any more of those at the moment. I planted up the remaining sweet peas into a pot 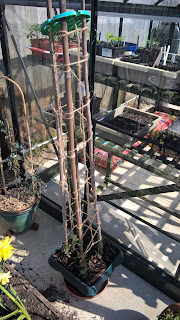 sowed parsnips albion F1 and white gem in seed trays, cornflower black bell, mustard, cress and micro rocket. I then did the job I've been putting off a couple for a couple of weeks - sowing carrots. I am trying the seed tapes for the first time (nantes 5) and I have to admit they are easier to sow, hopefully they'll grow well 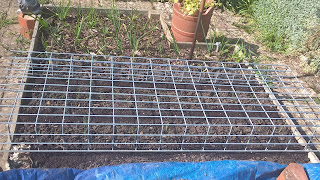 A couple of the Duke of York potatoes have broken through 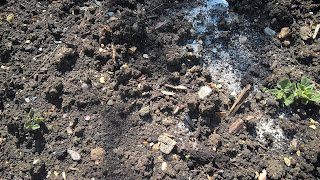 the lettuce are doing well 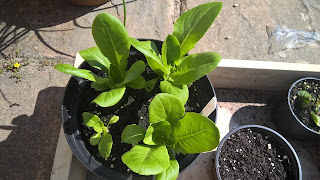 and the second sowing of peas are growing 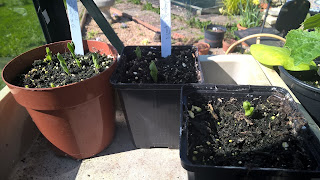 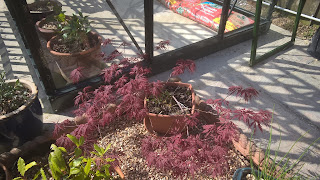 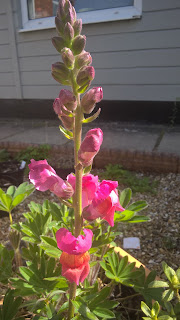 and a stunning azalea 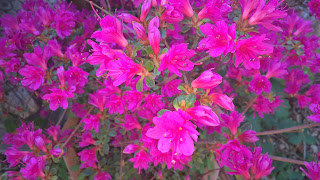 Last job of the day was water the front garden. It's been a productive week and there's still plenty more to be done. The weather forecast for the week ahead is cooler then warmer again and apparently there's no rain forecast for the rest of April, so there's going to be a lot of watering to be done. Have a good gardening week and catch up next weekend.
Regards,
DD
Follow me on Twitter @DaisyDigga﻿
Posted by Daisy Digga at 20:06