Hope you've had a good week. The garden is flourishing after the much needed day of rain last Sunday.

Monday - and happy May Day. A drier day but not so warm. I went for a wander round the garden, it's looking lush and green and smells wonderfully earthy. The tadpoles appear to have joined the fish at the bottom of the pond, no doubt undergoing their transformation. There are a few flowers on the patio raspberry bush although it's hard to see them as they are tiny 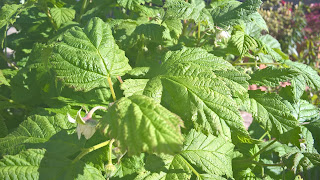 I did an hour or so of weeding this afternoon, it's a never ending job. The sky darkened late afternoon but all we had was a couple of rumbles of thunder and a short, sharp shower whilst other areas around us had torrential rain.

Tuesday - it was a chilly start but then became quite warm as the sun came out. There were a couple of fish near the pond's surface so I put in a little food. They were a bit lethargic to start with then ate it, so I put more in and other fish came to the surface - including a few of the new generation of fishlings! I earthed up the Duke of York spuds again, did more weeding and trimmed the tall grass growing in the pond - looking good. 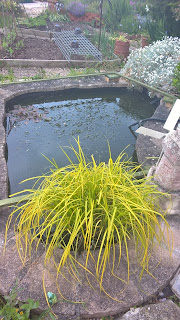 Then I planted up a couple of the courgettes which I've left in the greenhouse for a while as it's still not warm enough to put them out. There's still three more to plant. 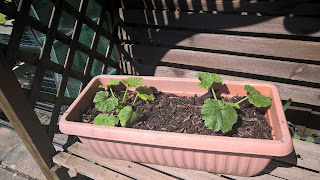 I put down ant powder near one the beds by the greenhouse as there was (now isn't) an ants nest. There are plenty of them around at the moment.

Wednesday - the forecast was for a warm day but instead it was chilly, cloudy and not very pleasant so I didn't spend much time in the garden. The pentland javelin spuds in the bag and in the garden have started to break through 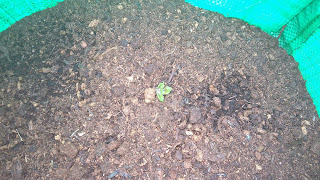 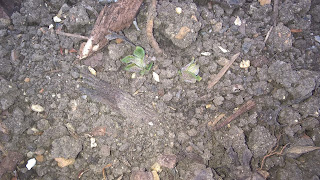 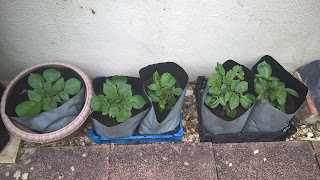 so I had to earth them up again. The eucalyptus and the original 'for your eyes only' rose have settled into their new positions 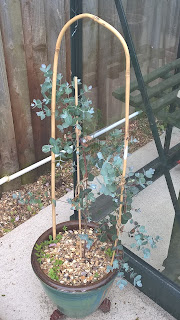 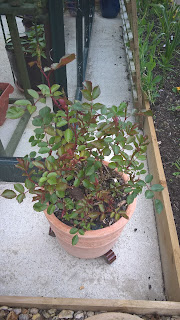 and this grass was left behind by the previous owners in the bed by the greenhouse. We moved it near the pond and it's looking much happier - no idea what it is though 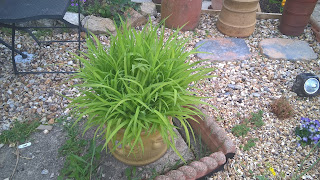 Last job of the day was water the greenhouse. As I came in I saw a blackbird rooting through the tree bark mulch around the peas and throwing it everywhere. They've been hooking it out of the pots as well.

Thursday - another warm day that wasn't. The forecast was also 'breezy'...it's definitely more than breezy, I'm surprised the washing stayed on the line! I planted up a couple of the cucumber plants (which are in the greenhouse) potted on the smaller cues and the black bell cornflower seedlings. The blue tits have been in and out of the nesting box most of the day feeding the chicks. I fed a couple of fish that had surfaced, still no sign of the tadpoles/baby frogs. I put more weedkiller on the more stubborn of the brambles that are still growing despite the dousing they had last week. The peas are in flower, so is another of the clematis 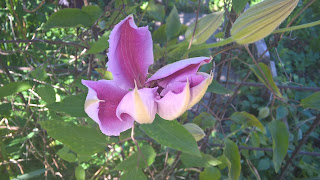 and the aquilegia I sowed last year has grown 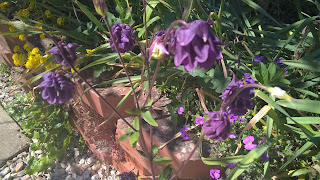 A couple of years ago I bought a small gingko biloba (maidenhair tree) which is slowly growing. It has delicate, almost scallop-edged, not quite circular leaves. 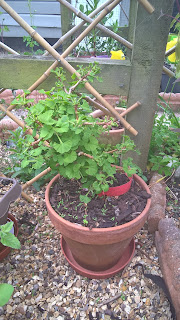 I didn't realise how big they grow or how long they live until we visited Kew Gardens last year. 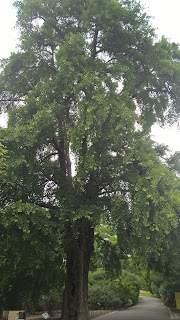 This was planted in 1762. Apparently, these ancient trees are nicknamed 'living fossil' as the genus is older than the dinosaurs. They can grow up to 40m and take up to 35 years to mature. I'll have to think where I'm going to plant it as it's definitely going to outlive a few generations!

Friday - even windier today but it's sunny. I'm not going to be gardening over the next couple of days so I watered the greenhouse and, although it's forecast to rain tomorrow, I'm not taking any chances as it tends to bypass us and I watered all the pots and the veg.

Sunday - cloudy this morning and sunny this afternoon. We haven't been gardening today but we did the next best thing and visited a large garden centre, along with hundreds of other people all having the same idea! We looked at plants for the pond, at the rhododendrons, the water features and garden ornaments and statues...for purchasing at a later date. All we came away with was a hanging basket. We really only need the chain but it was cheaper to buy the whole basket!

It looks like the warmer weather is going to continue through next week so I'm guessing there'll be plenty to be getting on with. I hope you have a good gardening week and catch up next Sunday.