It's been a much cooler week but still humid. We were away for a couple of days so Monday morning I topped up the pond (which I needn't have done because it rained all day Tuesday, apparently) and rescued a bee from the greenhouse before giving the plants a good soaking and fed the fish.

Wednesday - sunny and breezy today. As soon as we arrived back mid afternoon I checked the pond which was full and looking healthy and then the rest of the garden. The runner beans have sprouted 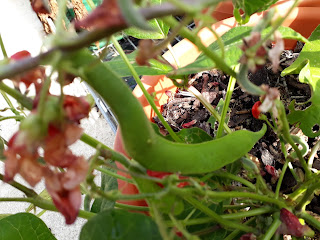 and so have the chillies 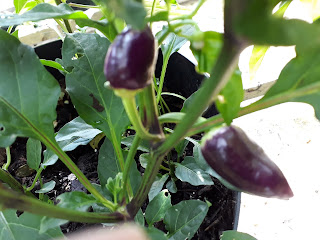 On the tomatoes was this moth (?) taking a nap 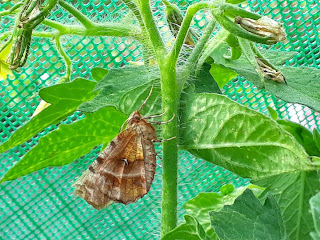 And on the parsley in the kitchen another insect was dozing. I took the plant outside and it started to move around and wake up before flying off (wasp? bee?) 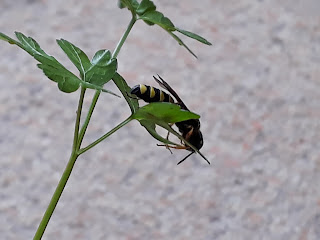 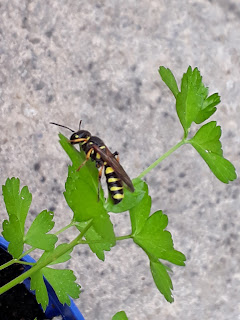 Thursday - sunny. Him indoors adjusted the pond pump filter and the water now clears the edge of the pond as it comes out. We had it on all day and the pond level stayed the same so fingers crossed. He mowed the lawn as the clover was dying off and looked too messy - looking good now though. 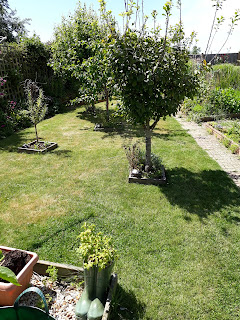 When he tried to get out the back to put the cuttings in the compost bin the blackberry bushes were blocking the gate so he had to hack his way through! He then did a recycling centre run - we always amass so much stuff. I tidied up a bit and picked peas, spring onions, lettuce, runner and French beans and a couple of carrots 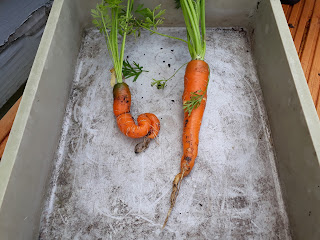 one day they will all be straight...maybe...but then it won't be so much fun!
Friday - quite windy today with sunny spells. The fish ate well today, very lively. I was pleased to see I hadn't disturbed the leaf cutter bee last week and it is still going into the pot. I pulled the last of the onions for drying, picked the red tomatoes and tied back the sprawling cucumber plants. I dug out another of the Duke of York plants that has died back...1lb 4oz (approx. 600g) - they're bigger than they look here. 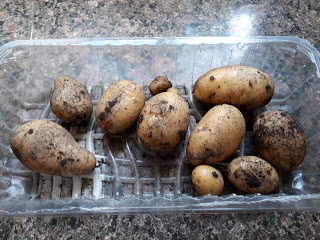 I'm sure I had better yields when I grew them in the bags but the silver lining is that they have improved the soil. Last jobs of the day were to put in the pond clear and swill it around carefully, feed the fish then water the pots and the greenhouse. I picked a cucumber and had sliced some of it before taking a pic - oops, so here it is not quite intact 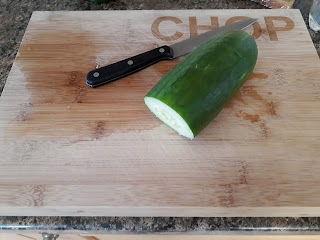 We have some new flowering on one of the climbing roses 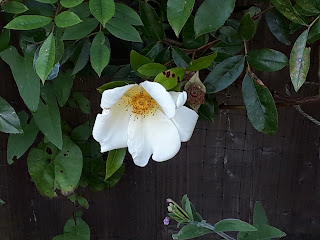 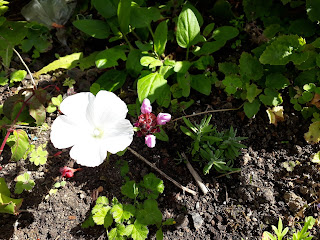 Saturday - a cool and cloudy day. I went out first thing to feed the fish and they weren't interested. I turned the pump on to see if it will wake them up. They perked up later in the morning and by evening were lively again. I dug up one of the pentland javelin plants as it had died off and, unfortunately, it's a failure. The potatoes are green and undergrown. 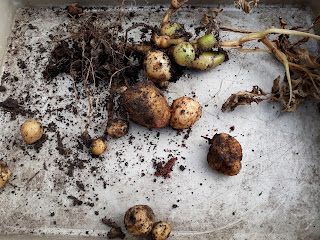 I just hope the rest are ok. I pollinated the cucumbers as there are masses of flowers but only a couple more cucumbers growing. Nothing else ready to pick at the moment so apart from a bit of tidying up nothing else in the garden today, but here are some pics of the cottage garden 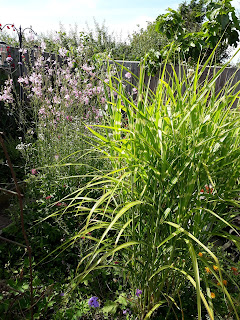 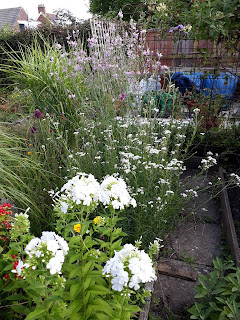 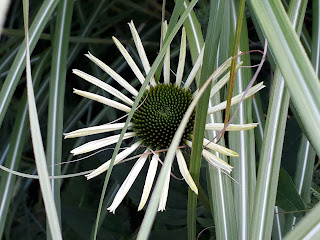 I love this flower peeking out through the ornamental grass

Sunday - cloudy and spitting with rain early. I've been working all day so I fed the fish before I left and again, they weren't interested. Strange. But they pounced on it early evening. The hazelnut tree is looking healthy 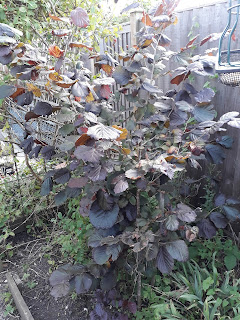 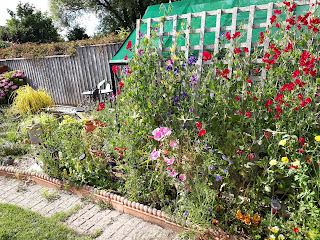 ﻿
and the free fuchsias are brightening up the pots 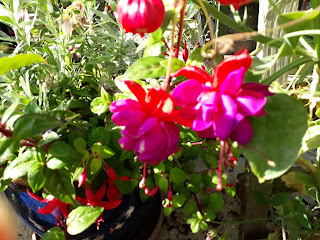 Well that's all for this week. The weather for the week ahead is hot and humid tomorrow then thunderstorms coming in from Spain and France late Tuesday, early Wednesday, then cooler for the rest of the week. Not so sure I want the thunder and lightning but the rain will be welcome. Have a good week and catch up next Sunday.
Regards,
DD
Follow me on Twitter @DaisyDigga﻿
Posted by Daisy Digga at 20:36