It's been a good week for the garden, a mixture of sunshine and showers. Why do weeds always grow faster than the flowers?

Monday - hot and sunny today but I didn't do much gardening as it was flying ant day and they were irritating to say the least. Apparently they are a sign that a thunderstorm is on its way. I pulled the carrots Amsterdam that I tried growing in a container...they haven't been successful from the standard carrot point of view but entertaining nonetheless 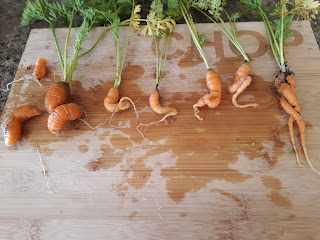 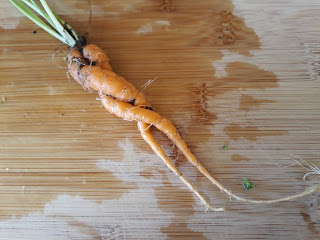 ﻿
﻿
I pruned back the sweet peas and did a little bit of tidying. There were no birds in the garden today, just bees and butterflies. I picked a pepper, lettuce, tomatoes and spring onions for lunch and found out why the green peppers are a weird shape...they aren't peppers, they're chillies. Hot chillies. Chopped up in my salad! 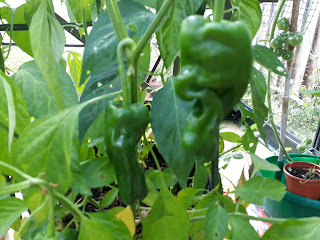 And now I look at them closely, they are definitely chilli-shaped. I just thought it was the normal mis-shapes I usually grow!

Tuesday - hot and sunny and humid despite the wind. One of those days when it's tiring just to move. But it didn't affect the fish as they were lively this morning. The leaf cutter bee is back, thankfully.

Wednesday - we had thunderstorms overnight, rumbling around for a few hours. Today was cooler and drizzly all day so again, not much gardening done apart from watering the greenhouse. The tomatoes are cropping well 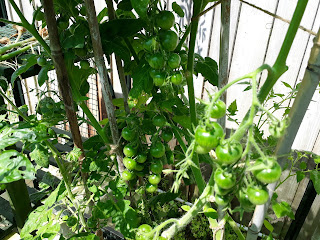 Thursday - sunny and breezy. I trimmed back the tomatoes and cucumbers, tied back the peas and earthed up the King Edwards as the heavy rain on Tuesday night had washed some of the soil away. I'm going to call myself 'The Bee Rescuer' as I came to the rescue of another one trapped in the greenhouse. They come in through the vents then can't get back out. I dug up another pentland javelin plant that had died off, another 1lb (approx. 500g) 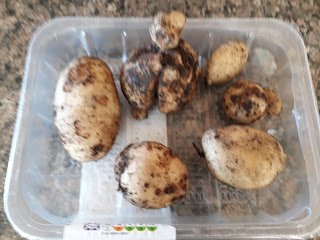 Not much of a crop but they taste good. There's another couple of plants left in the veg garden plus a couple in the big green bags I usually grow them in. I re-potted one of the apple trees that has grown from seed, it's doing very well 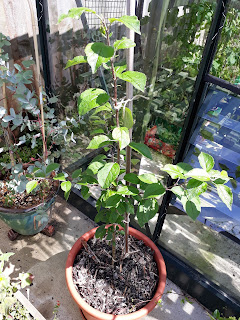 Found a couple of radishes lurking in the garden I'd forgotten about - definitely not for eating, too big and woody 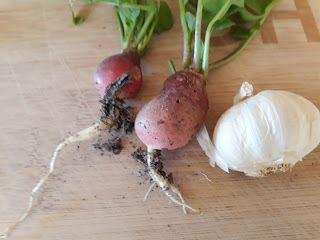 I took some pics from inside the cottage garden 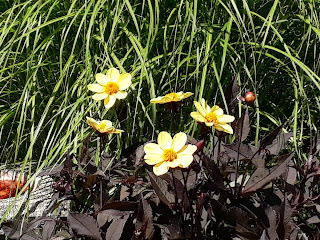 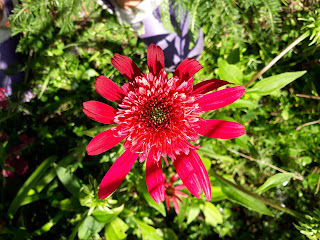 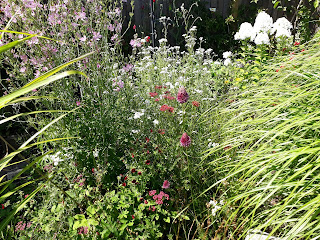 Friday - windy today with heavy rain showers so again not much gardening. I picked peas, runner and French beans and a typical Daisy Digga carrot 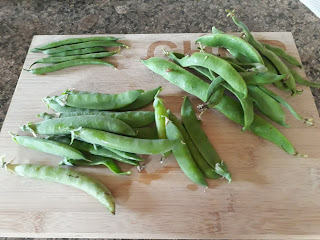 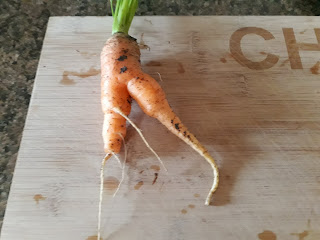 I fed the fish a few times, the water is looking much clearer which pleases him indoors.

Saturday - a day of dark skies, heavy rain and a few sunny spells. All week there has been a red admiral butterfly that settles on the patio. When I walk past it flies off then comes back, same as when I try to take a pic. I think it's shy.

Sunday - a sunny start but windy, cloudy and chillier. I fed the fish, cut back the passion flower growth coming over from next door. It's lovely but invasive. Watched Gardeners' World, the only relevant job for me was cut off the tops of the tomato plants to concentrate the growing on the fruit...done.  I tied back the goji berry as it had fallen over in the wind and had a general tidy up. There are some new flowerings this week. Aster (I think) or something similar 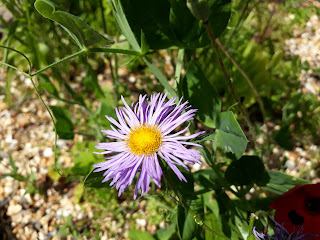 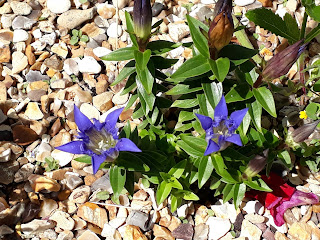 crocosmia in the shade garden 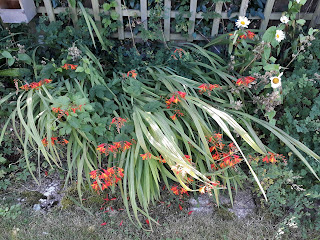 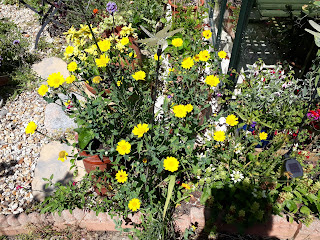 and lantana huff. I'm pleased about this because I thought I'd pruned it back too much 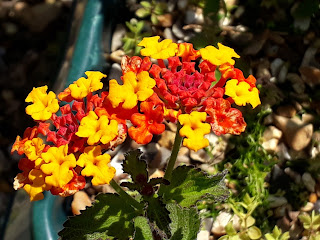 So summer is well under way and, with the rain, the garden is looking colourful and lush. And to finish, I don't think I'm going to be inspirational in the fashion world 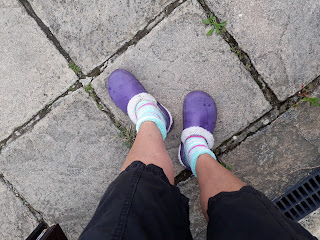 but at least my feet were warm and dry! Just hope the neighbours weren't looking...

That's about it for this week. The forecast for the coming week is more sunshine and showers and temperatures staying on the cool-ish side. Enjoy your week and catch up, hopefully, next weekend...not sure what's on the agenda at the moment.