Dorset Garden Diary - Plenty of Potatoes and Plenty of Wildlife

Apart from a blip midweek it's been mainly hot and sunny until today and the garden has been full of wildlife.

Monday - very hot today with no breeze. At 6.30am a squadron of geese flew over (that's the first time I've heard them this year) and there were pigeons, sparrows and blue tits in the garden all morning; a squirrel kept passing through on it's way to and from somewhere and all day the garden was busy with hover flies, bees, butterflies and damselflies. I cut back the ornamental grass in the pond before it starts shedding it's leaves, picked the one cucumber (tasty) and emptied the last of the Pentland Javelin potato bags. It was definitely save the best 'til last - 6lbs! 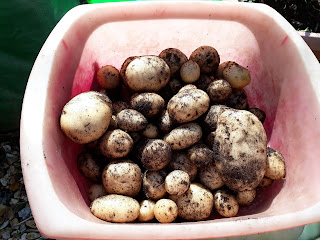 Tuesday - a bit cooler thankfully but still sunny. Pulled up the tomatoes in the pots as they were dying off, topped up the bird feeders and the water in the pond from the water butts. That was it, there wasn't much else to do apart from a bit of tidying.
Wednesday - no gardening today but the weather was a bit of a shock, the temperature dropped by over ten degrees!
Thursday - went to feed the fish and there was a rustle in the undergrowth and out walked the ginger and white cat that used to come into the garden. I then went to check on the cottage garden, there was a rustle in the trees and there was the squirrel...made me jump! I picked some raspberries but the birds had got there before me 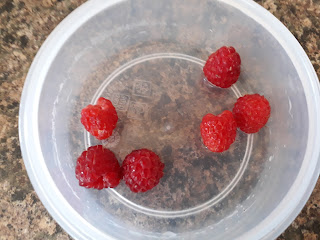 don't think I'll get much jam out of these!! There's another flower on the 'for your eyes only' rose but instead of being orangey-peach it's pale yellow/nearly white 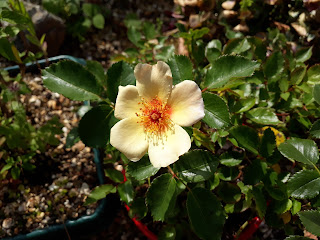 Also noticed the lemon tree is in flower 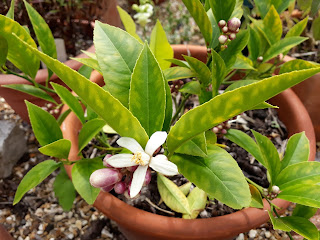 Friday - hot and sunny again. There was a collared dove in the garden. Now, I thought because it's such a delicate looking bird it would have a delicate call but it's quite harsh. There was a blue tit flitting amongst the trees and the garden was invaded by small white butterflies all day.
Saturday - and again hot and sunny but more of a breeze today. Whilst having breakfast in the conservatory I was watching a squirrel. It's smaller than the usual one I see and it came bounding down the garden path with something green in it's mouth, disappeared briefly by the pottering shed then galloped back up the path, veered left then headed for the veg gardens. I decided to dig up a couple of the King Edward plants as they've died off. I dug up 3.5lb (pleased!) plus...3 Charlotte potatoes and another pound of Pentland Javelin I'd missed. Not only that, I dug up what looked like a green potato but thought, it can't be, it's been under the soil. Then I dug up another. Then I remembered the squirrel. At first I thought they were figs but on reflection they could be under-ripe walnuts maybe?? 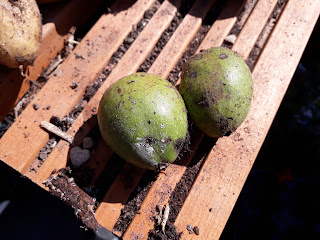 When I'd finished digging up the spuds I put the squirrel's hoard back although not sure if it's in the right place. The spud bed is nearly empty now, just a few King Edwards left. The soil is much better than before. 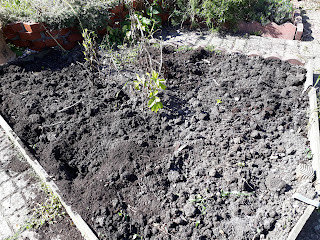 I split the achillea summer breeze that was in a pot, put it in the garden plus took cuttings. I saw a bright yellow spider - never seen one before so I looked it up on the internet and I think it might be 'misumena vatea' a crab spider. I threw away some of the red onions I've grown as they'd gone soft. For some reason they don't grow as well as the white. The pond bed is coming on 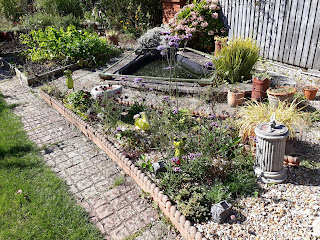 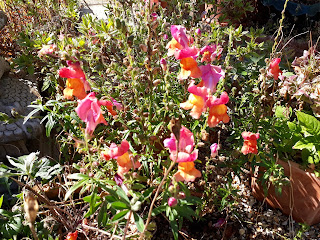 and the apple tree from seed is doing very well 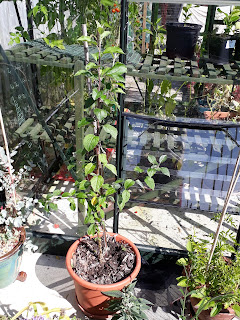 I pulled up parsnips for dinner - lucky I wasn't expecting them to be parsnip-shaped! 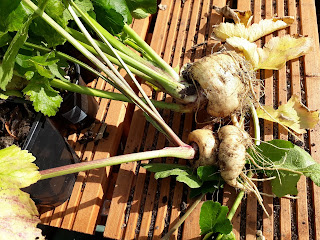 The forecast is for rain tomorrow so I started to sort out the pots by the side of the pottering shed. I threw a lot away and the rest I laid out so the rain can wash them (save me a job). So although it looks like a tip, it's actually well organised chaos 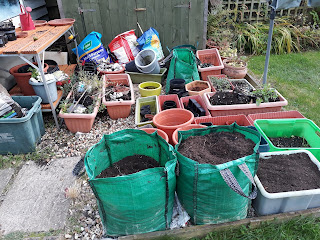 And...as I was emptying one of the small troughs guess what I found?? 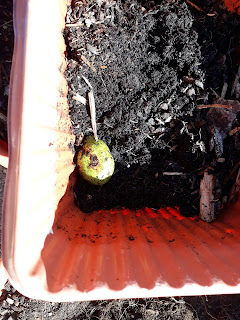 yep...the squirrel's been in the pots as well. I didn't know where to bury it so I left it on the table.
Sunday - rain stopped play and feeling autumnal today. The garden needs it and the pond could do with a top-up. I did venture out to see if the squirrel had found it's treasure, but it's still there.
That's it for this week and for the next couple of weeks. The Digga's senior will be garden sitting whilst we head off on our yearly adventure. Oh...forgot to say...now we're not going to be here for a couple of weeks the cucumbers have decided to grow!!
Regards,
DD
Follow me on Twitter @DaisyDigga
﻿
Posted by Daisy Digga at 14:43