These splendid gardens are situated on the stunning Dorset Jurassic Coast between Weymouth and Bridport. The first Countess of Ilchester established the gardens, initially as a kitchen garden for herself, and it is now a 30 acre site filled with the rare and exotic. It's also possible to walk from the gardens to a lookout where there are fabulous views along the Jurassic Coast.

You can either follow the white arrowed pathways or go exploring 'off piste' along smaller pathways throughout the gardens. A laminated map can be hired for £2 (refundable) from the ticket office (which I did) although it isn't really necessary as there are plenty of maps at intervals around the gardens. Some of the smaller pathways are a bit winding but the main pathway is wheelchair friendly.

Although warm, it was quite a windy day and, along with the wind blowing through the trees and the constant noise of birds chirping and foraging in the undergrowth, I could hear the waves on the pebbles of Chesil Beach.

The first 'off piste' glade I came to was home to this beauty: 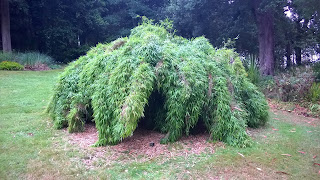 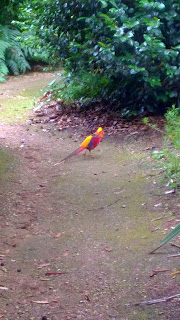 This was a sight to come across amongst all the greenery. I am not a huge fan of hydrangeas, but I have to admit the copse did look stunning. 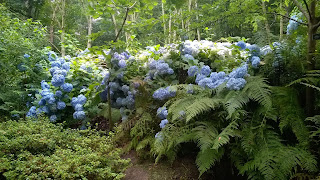 I partly followed the arrows and partly ambled around which is what most people seemed to be doing, spotting an unusual tree or a bright flower down partly hidden pathways. It's very easy to lose your sense of direction but that adds to the fun.

One of my favourite places was the 36 metre Burma Rope Bridge that spans one of the ponds. The bridge is a new edition for this year, the 250th anniversary (1765-2015) of the gardens. 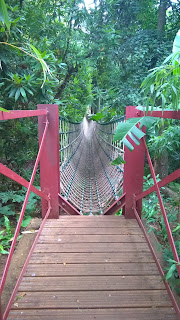 I had a brief conversation with a gentleman from New York who was enthralled with the gardens, especially the Sino Himalayan Garden. This, to me, was reminiscent of Monet's garden with the small bridges, but without the water lilies. The water lilies are actually in a couple of purpose-built ponds near the end of the trail. As you can see they are full of goldfish; you can buy fish food and feed them. 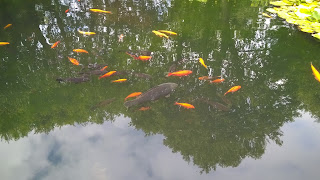 A family asked if I would take a group picture of them. I said yes and they all stood stiffly by one of the ponds. I suggested that maybe it would make a nice picture if they all sat on the long, curved stone seat at the end of the pond area. They were all happy with this and the photos came out really well. They thanked me and said I obviously know what I'm doing. I just smiled...if only they knew!

It's a friendly place, with plenty to admire and chat about with other visitors as you walk round.

The Gardens have a restaurant, a gift shop and a specialist plant nursery. My credit card managed to emerge relatively unscathed from the latter, but I have made a note of the plants I will be going back for. Abbotsbury Gardens is also licensed to conduct Civil Ceremonies on site and, in my opinion, makes the perfect setting for your special day.

I won't give too much more away. I'll just say it's well worth a visit and you won't be disappointed. I'll add just one more thing though...make sure look in the aviary on the way out.