Dorset Garden Diary - Be Careful What you Wish For

Hope you've had a good week in the garden. My week got off to a good start. Monday morning 7.30am. I fed the fish and the large goldfish were just below the surface for a change waiting for food,so they  are getting braver. The fishlings were there in seconds, as always.  They make a sort of watery popping noise as they eat the food. I then donned wellies and thorn-proof attire and picked another 4lb of blackberries, this time I had competition from bees, wasps, flies and something I knew I should know but couldn't place. As luck would have it, later in the day someone posted a pic on Twitter of one in their garden, it looked like a praying mantis...in Dorset? The blackcurrant sage has started to flower, so has, finally, one dahlia. I took some more hot lips salvia cuttings, re-potted what seemed like hundreds of verbascum seedlings and planted out the spinach tree seedlings. No idea how high they grow so could be interesting. A friend gave me a bag of windfall apples which will go nicely with the blackberries. And talking of blackberries, some of next door's blackberries have crept over the dividing fence - as if I don't have enough already, but thank you anyway!

Tuesday - and another good day in the garden. I started to clear out the weed in the cauldron pond and a small frog leapt out so I've left it for the time being. I tidied the peas, cutting off the dead stems and leaves, collected the dried peas for sowing next year and tied up the new growth. I took out the sweet peas as they have now gone to seed and I tied the two gherkin plants that were growing in front of them onto the trellis. These two plants are an experiment (part sun) and appear too be doing ok, probably on a par with the plants in the greenhouse (full sun). The other two gherkin plants are also in the garden on trellis (full sun) and are doing magnificently. 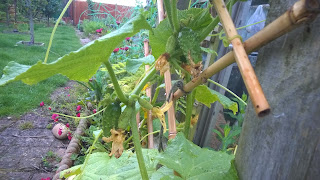 I picked a carrot to see how they are doing and glad to see they are growing true to form! 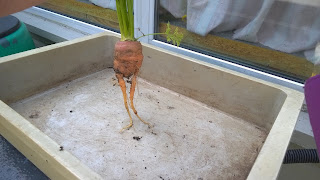 And it appears the parsnips are attempting to following suit: 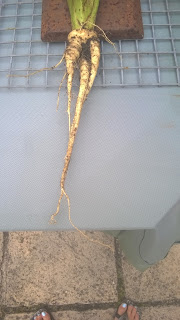 All day the garden was active with bees and butterflies, which is a good sign. Finally got round to watching last Friday's Gardener's World and note that irises are good around the pond for dragonflies so I'll move some for next year. I made good use of the blackberries I picked yesterday - over two litres of spiced blackberry liqueur bottled and stored for the end of year festivities...hic! 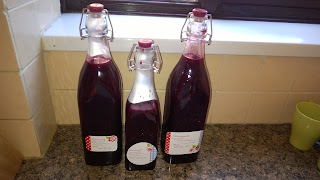 Wednesday and Thursday were, unfortunately, non-gardening days due to work commitments.

Friday - woke up at 5am and couldn't get back to sleep. My brain was planning the cottage garden, amongst other things, so I ran with it and I now have a plan. Out in the garden early, fed the waiting fish and then had a stroll round. There are nine new buds on the rosebush (For Your Eyes Only) we bought from RHS Rosemoor which is encouraging. Elsewhere in the garden flowers needed deadheading. I accidentally dropped a couple of the stems into a patch of campanula growing against the low wall. As I bent to pick them up, there was a rustle and a frog leapt out inches from me. I'd like to say that I thought 'wow, that's cool'...but I didn't. I screamed and ran away as it dived for cover into more campanula! All I could think of was glad I didn't have flip flops on. I did go back and take a pic though. 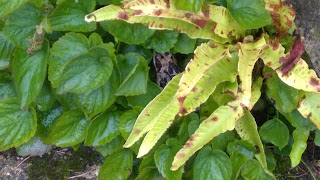 Hope you can see the frog in the undergrowth

After that, on my way to the pottering shed, I was dive bombed by a wasp, pesky thing. It followed me into the shed and I managed to flick it away and it flew into one of the spider webs I keep meaning to remove. As the wasp struggled to get free, a chunky black spider scuttled out from wherever and encased the wasp. Thank you spider, I will leave your webs alone in future. All this before 7.30am. Went out the back to pick more blackberries. At first glance the bushes looked full of them but on closer inspection most of the berries had rotted in the warm and damp conditions over the past couple of days. I did manage to salvage just over 1lb though.

Saturday - and up early for a trip to B&Q purchases: wood for him indoors, bags of compost for me and three plants for the cottage garden (Penstemon Phoenix(TM) Red, Shasta Daisy Broadway Lights and Dahlia Dark Leaf Happy Smile Party). Back home I dug over the cottage garden once more to remove the small weeds that had appeared then planted my purchases. I also planted Elegia Tectorum (a type of grass), yellow Achillea, Coreopsis Sunrise and Delphinum Black Night. It looks a bit bare at the moment but when we go to RHS Wisley in a couple of weeks I'll get some more plants plus I have seedlings in the greenhouse to plant next Spring. 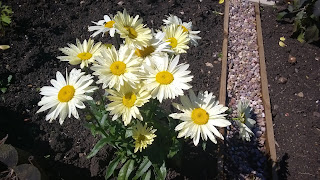 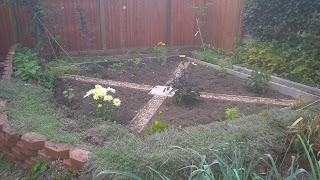 A squadron of geese flew over on a slightly different flight path but we still heard them in the distance. The chillies are coming along nicely - not sure when I should pick them though. 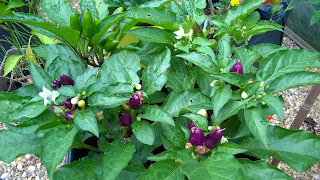 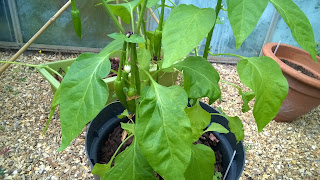 Him indoors finished off the bottom of the new fence and moved the big compost bin to it's new permanent position. He also cleared the pond of excess weed (and left it on the side of the pond so any creatures caught up in it to could get back into the water). He then pruned the top of the non-flowering, non-fruiting apple tree for me then mowed the lawn and not a minute too soon. As soon as he'd put the mower away the heavens opened! That was my cue to come indoors and bake a yummy blackberry and apple crumble.

This morning it's absolutely piddling down again, and the forecast for the next few days is the same. Did I really say earlier in the summer I wish it would rain???? Yep, I know, be careful what you wish for. Went out to feed the fish and the net was dipping in the water again. I'm sure it has to be a frog. Him indoors will come up with a solution to stop the net dipping, I'm sure.

Sunshine! The rain stopped earlier this afternoon so we have been able to potter. I collected all the rainwater from various receptacles around the garden and filled nearly three watering cans. I then picked some runner beans and some of the bigger beetroot which I'm not sure whether to pickle, make into chutney, freeze (apparently they freeze very well) or use them to bake a beetroot and chocolate cake. Hmmm...the latter sounds good. 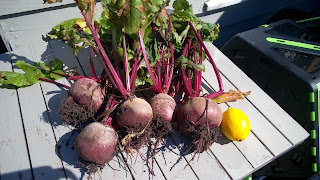 And a rosebud has opened: 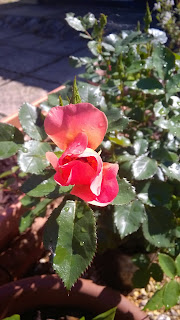 Well that's it for this week from a very soggy Dorset. I hope your week goes well and catch up next Sunday.
Regards,
DD﻿
﻿
Posted by Daisy Digga at 17:10