Fish in the Pond and Memory of a Goldfish

Well, the breaking news of the week is that we have fish in the pond. Not the new fish that I 'd planned to buy this weekend, but the re-emergence of the fish that we thought the heron (or something else unknown) had taken. I was out in the garden Thursday afternoon and stopped by the pond, as I always do, to peer in (which thanks to some decent rain the previous week is now crystal clear - all the blanket weed has gone and so has the dayglo phosphorescence). 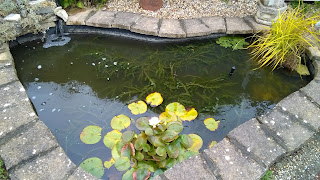 I saw something orange amongst the pond weed and initially thought it was a piece of terracotta pot but when I looked closer I saw another orange something, then another and they were moving (unlike terracotta pot fragments). "The fish!!!" I exclaimed excitedly to a couple of frogs sunbathing on a lily pad. I couldn't believe they were still there, and they have tripled in size, at least. They were a bit skittish when my shadow fell across the water and they dived for cover. They weren't like that before the sinking of the netting incident and presumed kidnapping - so, maybe, goldfish have longer memories than we give them credit for??? Also amongst the weed, were the black fishlings frolicking around. Ecstatic. Me, not the fish - although they did look happy. I then thought back to a couple weeks ago when a good half of the water drained out of the pond covering him indoors (hehe) and how we had considered totally draining it. Thank goodness we didn't, and thank goodness we immediately topped it up. Anyway, I fed the fish and left them to their own devices for a while. When I returned the food had gone...yesss!  Him indoors is going to make a firmer netting cover for the pond and I'm just hoping the heron doesn't appear in the meantime, although my early rising neighbours assure me it hasn't been around for a while. As of this morning the fish are still there...along with hundreds of pond snails for company. And I get to keep the reward money! 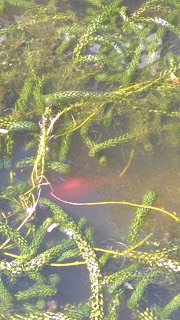 So onwards - as I've taken a break with the usual format this week I think I'll continue being a renegade and wing it. I was up before 7am Monday morning to finish pickling the shallots (I'd left them marinating in salt overnight). There are now three big jars fermenting away which should be very tasty at Christmas, if they last that long. I then went into the pottering shed and strung up the dried red onions which are now hanging next to the strung shallots. Bet you can't guess what the pottering shed smells of... I also wanted to empty the growing bag of Charlotte potatoes but it was too wet so I had to wait until Tuesday. I am pleased with the bounty and they are now in a large hessian bag in a cool, dark place. Nearly did my back in sieving the soil for re-use. Just the Maris Pipers to go now but I think I'll leave them until mid to late August. 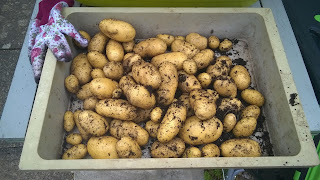 Some of the Charlotte bounty.

Part of the back fence came down in the high winds over last weekend. Him indoors was concerned about the panel being broken and I was concerned that it had landed on my blackberries and was squashing them. I managed to temporarily bodge it, oops, sorry, fix it (new fence going up next week) and then picked nearly a kilo (or 2lbs for us oldies) of blackberries which have been frozen in readiness for crumble and jam making. Friday morning I picked another 1lb and another yesterday - it's a bumper crop this year by the looks of it.

Whilst I was stringing up the onions I kept hearing a strange noise in the pottering shed, it sounds like a frog croaking. I've heard it a few more times this week. I'm sure it can't be but I'm not brave enough to actually check it out!

Yesterday I spent about 6 hours pottering in the garden, deadheading to encourage more flowers and then I put all the saved flowerhead seeds into labelled envelopes for storage until ready to sow. There are quite a few perennials which will look good in the new cottage garden. I potted up the seedlings I showed you last week. They've all put on a spurt and it took me over an hour as yes, yet again, I sowed too many, especially the tree spinach and little gem lettuce. More is definitely more. 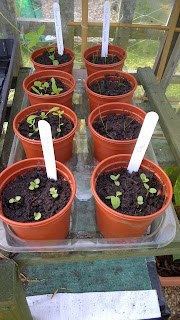 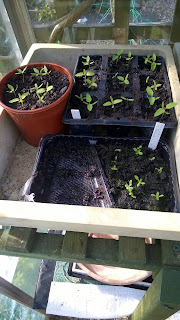 Just a fraction of the seedlings to show how much they've grown.

I also picked runner beans which are now in the freezer; tomatoes are starting to turn red although some of them are still quite small. A few more cucumbers have withered but, fingers crossed, some have actually passed the withering stage and doing well. A few of the beetroot are like tennis balls (but thankfully not furry and fluorescent lime green), the leeks are enormous and the fennel and carrots are finally in the race.

Yesterday I picked the first cucamelon, although I think it was a little under ripe. Intriguing little things. They look like melons, are the size of grapes, the skin tastes like cucumber, the inside looks like a cucumber's seeds and colour but it tastes of melon with a hint of lime - confusing to the tase buds but quite refreshing. 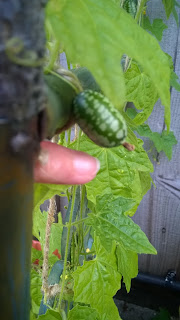 This is the cucamelon and my little finger (just to prove I do exist!) to show how small the fruits are.
Watched Gardener's World on Friday and yesterday trimmed back the thyme and have potted up the cuttings as I want to use them for the cracks in the pathways. A very interesting episode and I took notes, unfortunately in the dark as I couldn't be bothered to get up and put the light on, so yesterday it took a while to decipher what I'd written. Today has been the best day of the week weather-wise and guess what...I was working, which in a way was probably just as well as I didn't need to soak in a hot bath and apply muscle rub moisturiser this evening.﻿

Well that's it for this week. Have a good week and catch up next Sunday.