It's been a hot and humid week and the tomatoes have thrived, Picked another 5lb this week bringing the total to 17lb so far!

Monday - I pulled out the squash as it's not doing anything except producing pretty flowers. I took softwood 'for your eyes only' rose cuttings and pruned the bushes then deadheaded the perennials. This morning, sparrows, robins and a couple of blue tits were decimating the swiss chard I planted in the trough 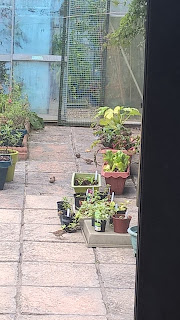 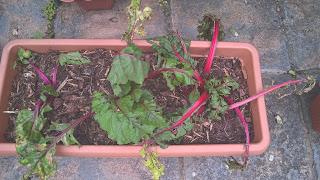 I thought the pepper plants were finished so I carried the pot outside to empty it, then saw that they are in flower again so I had to carry it back to the greenhouse. I checked the chillies and they are sprouting again 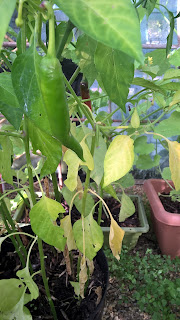 Tuesday - today was forecast to be the hottest September day on record and it certainly felt like it at 8am...by 10am we had torrential rain with thunder and lightning! I sorted out the remainder of the onions that were drying in the greenhouse. The shallots are good but the mixed onions are disappointing, I won't buy those again. I watered the greenhouse and picked another pound of tomatoes.

Wednesday - the fish were hungry today, maybe they're feeding themselves up for the winter (if we have one). I watered the garden pots and the veg.

Thursday - it was the sort of day that you felt weather was going to happen. At 10.30 this morning it was 78F 25C in the greenhouse. The air was heavy, hot and humid all day. I picked another pound of tomatoes and trimmed the leaves off the plants - there are still loads to ripen 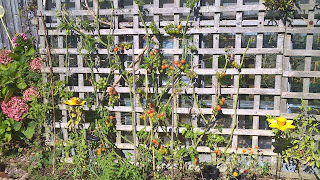 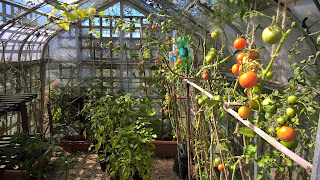 I picked the first parsnips (really pleased with these) 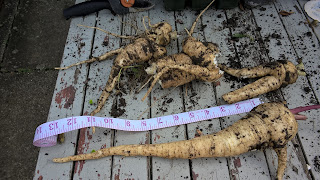 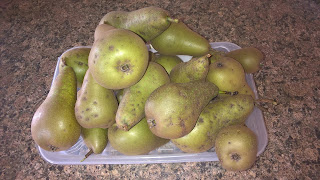 and most of the carrots 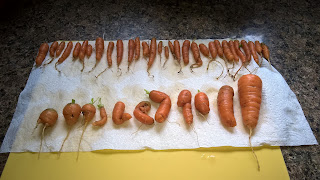 The Amsterdam 2 (amice) have done well in the troughs (the small straight ones) but the chantenay red and the carrot (large) have been disappointing.

Friday - vicious thunderstorms had been forecast overnight. Thankfully, they didn't materialise in this part of Dorset but there was flooding in many parts of the country...we could've done with the rain though. Much fresher today, in fact it felt quite chilly. Bought more fish food, put the pond pump on for a couple of hours and tidied and watered the greenhouse. 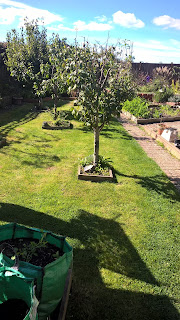 filled the car with garden rubbish and took it to the recycling centre. Leaves are falling through the netting over the pond so I cleared them out then him indoors put another fine layer of netting over the top to hopefully stop too many falling through. There were also a lot of white feathers in the pond. He then dug up and moved the goji berry so it can now grow against the new fence 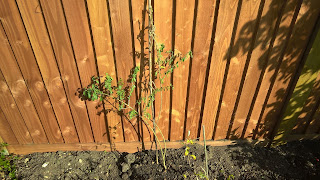 The last job of the day was give the garden a good soak.

Sunday - blue sky today but not as warm as last week. Did some last minute tidying up in the garden and greenhouse (picked 2lb tomatoes) as we are going away...Mr and Mrs Digga senior will be garden sitting. Not sure what the weather's going to be for the coming week here in Dorset but it's definitely looking good in Morocco. I'm looking forward to seeing how the garden changes over the next two and a half weeks. Enjoy your autumnal gardening and catch up in October.