Definitely an autumnal feel to the weather this week but we have had some balmy, sunny days and this weekend we've had much needed rain - buckets of it!

Monday - there was a lot of sparrow and bee activity in the garden all day. I collected perennial seeds for sowing, picked flowers for indoors and raspberries that were ripe (not many). As I walked past the pond there was a big splash, like something had been thrown in. Water had splashed onto the concrete rim and the surface was rippling with mini waves. I have no idea what it was...maybe a fish jumping although I wouldn't have thought it would have made that much of a splash as it can't leap high because of the netting. It could've been a frog or toad maybe. I pruned the apple tree - not as drastically as last year. The lemon balm in the top bed has started to take over and devoured the gooseberry bushes. I started to cut it back then thought, it's only going to take over again (I don't remember it being so invasive) so I dug it up and it's now composting nicely. I picked beetroot and boiled it up, carrots, runner beans and fennel (the kitchen smelt of aniseed all day). I watered the greenhouse and the outside pots.

Tuesday - jobs carried over from yesterday were move the goji berry, move the wild basil from the top bed, sort out the bulbs, start sowing perennial seed and move the gooseberries. Didn't get done so carried over to tomorrow. I had the pond pump running for a couple of hours then topped up the pond with water from the butts as it was getting low. I cleaned the miniature pond cauldron but no point setting it all up again until we have rain forecast, but I want to get it in situ soon for the wildlife. I moved some of the plants around to different parts of the garden to see if they'll grow better. Pickled the last of the gherkins - how did I miss this one 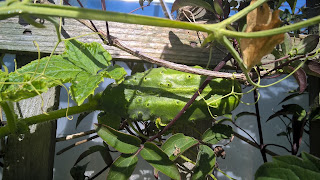 5 jars, the best yield so far 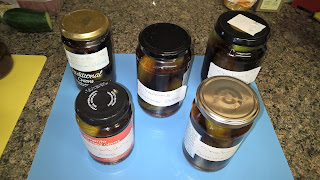 Watered the veg gardens and cottage garden and fed the greenhouse plants. The sparrows are using the veg gardens as a dirt bath. I had a clever idea - the sunflower is now drooping so I cut the top off, took some seeds for planting then, as the birds like the seeds, I hung it up for them. Halfway through the evening I went outside and took it down as it was hanging above the lawn and when (not if) the birds throw the seeds around we'd end up with sunflowers growing in the lawn and him indoors would not be too pleased.

Wednesday - didn't actually do much in the garden today as I was working. I froze the rest of the plums that have ripened, froze another pound of tomatoes and picked more blackberries, the largest and juiciest ones were just out of reach, as always. I weighed them, 12oz 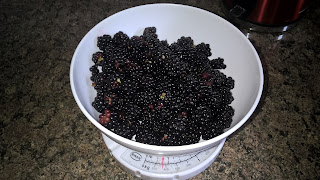 That's the third batch I've picked and each batch has been 12oz! Cloudy today but warm. Went for a walk this evening, and treated myself to an ice cream. Jobs carried forward not done.

Thursday - move eunonymous added to list of jobs (my list)...and not done today. I picked fennel and carrots for my stir fry - the carrots grown in the tub are smaller but straighter 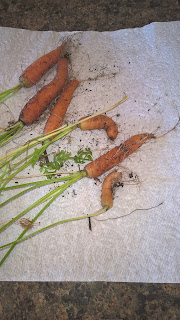 This afternoon and early evening the garden was bustling with different types of bees and butterflies.

Friday - Added to 'to do' list pull out all plants that have finished e.g. sweet peas, couple of the gherkin plants and the cucumbers which are dying off. All those jobs not done and carried over to the weekend - not good. I went to buy a pygmy water lily for the cauldron pond but they haven't got any now until next spring which is a shame. A friend had given me some quince/quinces (?) and crab apples. I know what I want to do with the quince but not sure about the crab apples. Twice this week there has been a spider in my gardening boots when I've shaken them upside down (just in case - and glad I did). Brave spiders...and brave me.

Saturday - I was up early before the rain arrived and out to the garden centre to buy shrubs to get in before the winter (the ruby buddleia is not in the picture as I left it in the front garden for those of you who counted 4 plants in the pic and 5 descriptions below!) 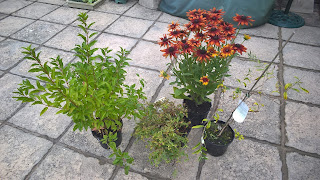 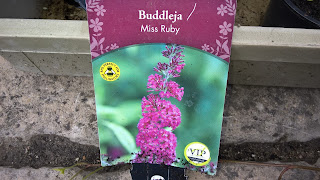 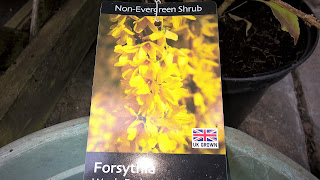 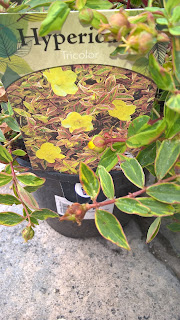 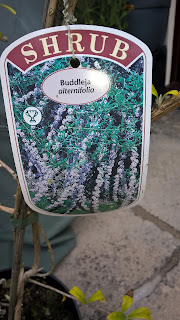 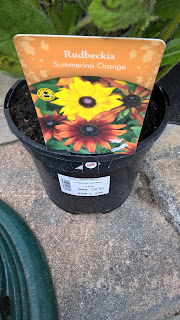 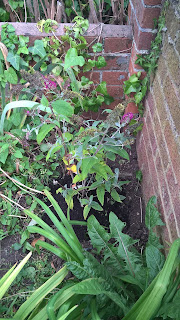 A bee settled on it as I was digging it in. I re-planted the dwarf buddleia in the newly cleared cauldron pond garden. The cascading buddleia, forsythia and the hypericum ground cover are going in front of the new fence and the rudbeckia will be going in the cottage garden. I dug out a larger hole for the cauldron pond so it's now lower in the ground and filled the bottom with gravel and larger stones, one for a plant pot to stand on and three on top of each other to allow wildlife to get in and out easily 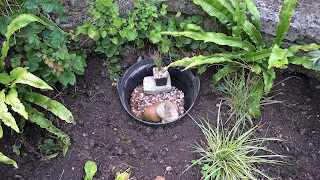 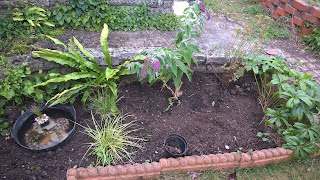 I also put in a small piece of oxygenating plant which I hope will root. The rest of the plants I'll do tomorrow with everything else I need to do. It's going to be a busy day! I picked more tomatoes and cucumbers and made the chilli jam. Wow...it's hot, and I mean hot! 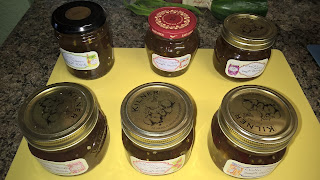 Oh, and I also ordered some plants, shrubs and ground cover which will be delivered October/November. Him indoors is away and doesn't know yet! There is quite a bit of garden to fill so might as well get it all done in one go. It rained this afternoon. Light rain said the weather forecast...ok... 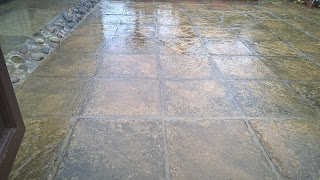 Sunday - I ache. Before I can plant out the shrubs I bought yesterday I have to dig the bed over and get out all the roots from the raspberry runners and next door's blackberry plants that have come over. That took over an hour and a half and still not got them all out, I'll have to get some root killer. I re-planted the gooseberry bushes (tick off list) and also found a blackcurrant bush which I re-planted from the back bed. I have a plan for the back bed now. I re-potted the turnips (tick) and planted out the swede (tick) with the garden grown seedlings, although I'm not sure what's swede and what's weeds in the veg bed as they all look the same. Interesting that swede and weeds are anagrams of each other. When I was digging this appeared and, funnily enough, I dug one up yesterday when doing the cauldron pond - no idea what it is 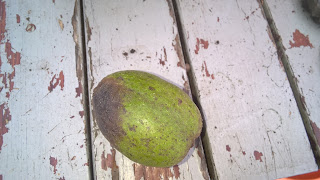 I also dug up this fat slug...who ate all the pies eh! It went for a journey over the fence. 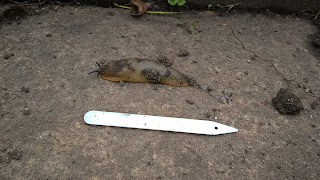 And lastly, before he went away him indoors put in the grass sections I grew to patch up the lawn. They actually put the lawn to shame 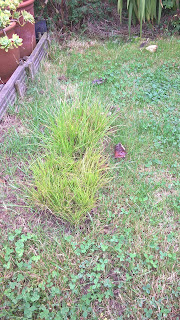 Watched the Countryfile weather this evening and looks like it's getting warmer again this week with rain coming in towards the weekend. As it's raining again now I don't think I'll need to do much watering. Have a good gardening week and catch up next Sunday.
Regards,
DD
Follow me on Twitter @DaisyDigga﻿
Posted by Daisy Digga at 20:17