Definitely colder this week, especially at night but thankfully no frost yet. It's been quite warm at times during the day but only for a couple hours here and there.

Monday - I had to work today so unfortunately no gardening but I did make a list (I do like lists - they stop me forgetting things!) of the jobs for this week and we did go shopping for DIY and garden essentials. I also popped into the supermarket café for more coffee grounds.

Tuesday - the pond netting was dipped in the middle this morning. I'm thinking it could be a frog trying to get into the pond, not realising there's a gap under the netting frame. The fish are still willing to feed but appear to be struggling with the food now it's got colder so I'll have to buy the food for under 10C 50F. Again no gardening today because we had builders in to replace the flat roof on the conservatory and my pottering shed...all routes up the garden were blocked with tools and ladders and workmen. 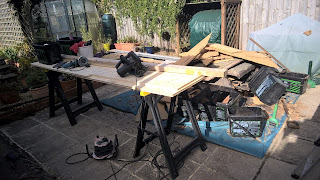 Wednesday - cloudy with a cold wind, glad I wasn't working outside. I bought the winter fish food, scrambled around to the pond and fed them and it was gone in seconds. Perfect.

Thursday - started cold but warmed up nicely and sunny all day. I was starting to get twitchy with withdrawal symptoms from not being in the garden but the workmen finished today. They've done a good job and tidied up as if they'd never been here - very important. 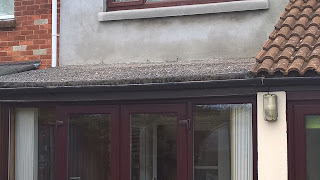 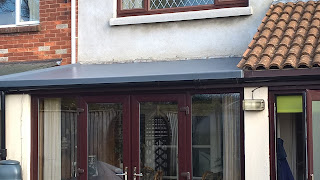 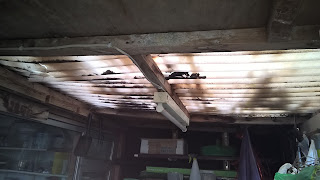 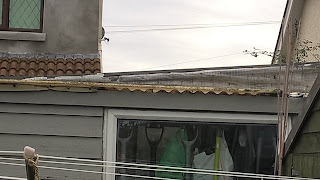 Pottering shed with no roof 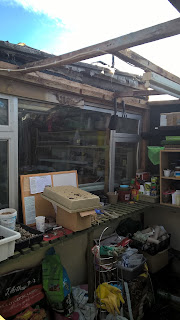 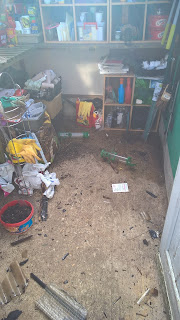 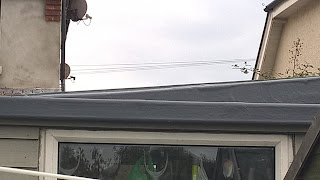 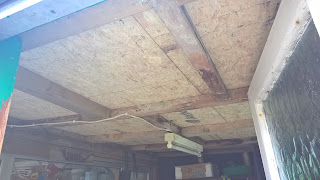 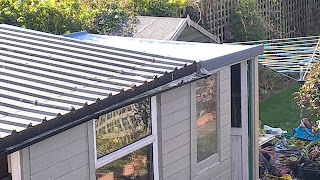 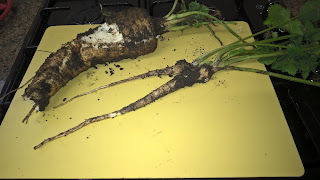 He then removed the pond pump for the winter, gave it a clean, wrapped it in bubble wrap and covered it with a pot in case we have a cold winter (although we haven't for a while). Also, I read that it's better not to use the pump in the winter because it disturbs the warm water at the bottom of the pond where the fish over-winter. He took out a third of the oxygenating weed and we trimmed back the potted grass. When we put the net frame back we raised it a little more on bricks so the frogs can get in and out easily. 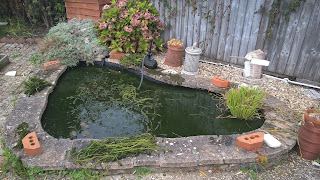 I replanted the fritillaria (snakes head) bulbs into the garden and some alliums that were growing in a pot. I planted the garlic, splitting one bulb and putting the cloves in a big trough outside and the other cloves I've sown in small pots in the greenhouse - another of my experiments.

Friday - the hedges and shrubs were full of small birds this morning and there was one fat wood pigeon waddling up the lawn. The food on the bird table hasn't been touched. I'm sure the gaps are big enough for the sparrows etc., I'll give it another week. Him indoors cut back the blackberry thorns coming over from next door (I asked the neighbours if they could be cut them down from their side and they said yes) and the wild rose and passionflower. Before... 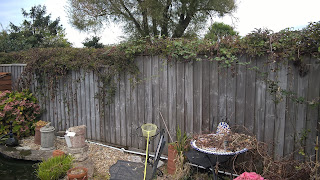 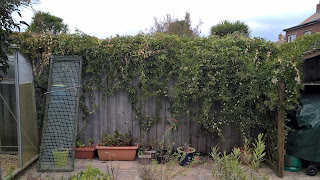 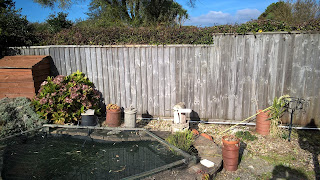 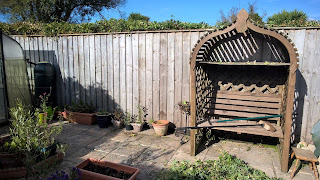 I checked on the sweet peas which take up to 21 days to germinate. This is 6 days later just pushing through! Not much difference between the soaked and non-soaked seeds. The greenhouse sweet peas are not showing yet. 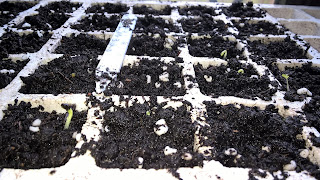 I dug up the rest of the parsnips, disappointing. It's not been a good year here for root veg - they do taste lovely though. 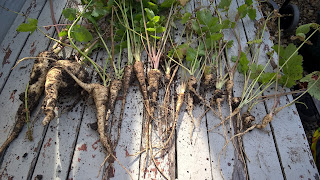 The fish are loving their new food and fattening themselves up for winter.

Saturday - fed the fish this morning and there was a large red admiral butterfly on the fence. I tried to get a pic but it flew away. A bit late for butterflies I would have thought. I intended to plant the onions but domestic chores took over.

Sunday - and these are the sweet peas after 8 days 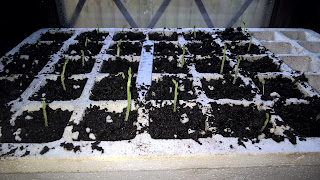 I need to go to the garden centre tomorrow and buy some special pots for them. I watched Gardeners' World (last one until next March) and Monty said to plant daffodil bulbs at least there own height below the soil. I planted half of the free daffodil bulbs in the front and back gardens, I'll do the rest next week.  And just remembered, every morning and every evening formations of geese have been flying over on their way to the RSPB reserve and back.

Watched Countryfile this evening and the weather is staying chilly for a couple of days - hopefully we'll have some much needed rain - then it's warming up again from mid week. Have a good gardening week and catch up next Sunday.