Hope you've had a good week in the garden. It's been a quieter week here but there's still plenty to do The weather alternated between autumnal balmy and just above freezing in the mornings.

Monday - 1C 33.8F at 8am this morning, thankfully no damage to the plants. I picked the remaining tomatoes (just under 2lb) then removed the plants as a) the outside tomatoes were becoming wind damaged and b) I wanted to clear out the greenhouse and disinfect it before storing delicate plants and cuttings over the winter. I also pulled up the green pepper plants (despite more flowers appearing) as the peppers haven't been successful this year but I've kept the chilli plants as they are flourishing. It took me all morning to empty and clean the greenhouse. I misjudged cleaning the roof panes and had a dousing of Jeyes Fluid - not the nicest of perfumes. Anyway, it's looking good 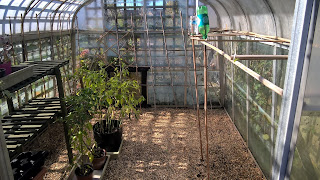 Next job was to pot up the Viburnum Kilimanjaro. 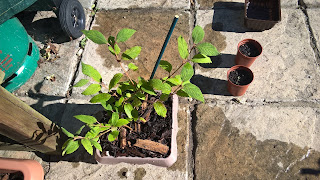 I've been leaving it outside during the day and in the greenhouse overnight as I don't want to lose this one as well. I checked the celeriac and it doesn't look as if the bulbs have formed but I'll leave them in for a few more weeks. Late afternoon the mozzies/midges were back with a vengeance in gangs dotted around the garden.

Tuesday - the day started with a stunning sunrise. I sat in the conservatory having breakfast and the garden was full of small bird activity. Sparrows, blue tits, great tits and blackbirds were feeding and flitting all over the place. Unfortunately I had to work so no gardening today.

Wednesday - and this morning not a bird to be seen! I dug up the pea and runner bean plants and dismantled the frame. I then dug over the veg beds (digging round the celeriac and the remaining parsnips) then I sprinkled over the coffee grounds which are good for the soil and, hopefully, will keep any cats off...think I read somewhere they don't like the smell. 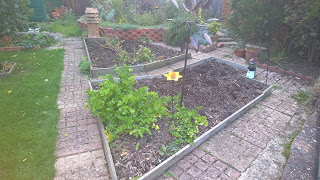 Aubretia had rooted itself along the edge of the veg garden next to the cottage garden so I dug it up and planted it in a trough for the time being and there was also a Japanese anemone growing so that's been potted up as well. 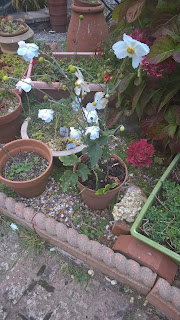 Thursday - I deadheaded most of the rudbeckia in the front garden in the hope it will keep on flowering. I left some seed heads for the birds. I re-potted the Lantana Miss Huff into a bigger pot and then pottered in the pottering shed. Amazingly, it's still reasonably tidy 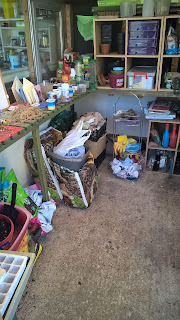 which is more than can be said for the area outside the pottering shed. 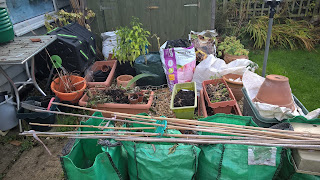 This has been nicknamed the 'holding area' or the 'him indoors' area. This is where everything for the compost bin out the back and the recycling centre gathers. It's on the list. Since we had the new fence put up I've noticed this tree which was previously hidden amongst the brambles in next door's garden, I think it might be a fig tree. 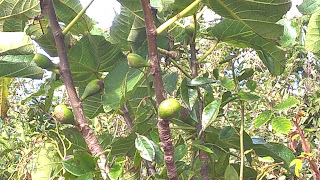 Friday - another nice day albeit windy. I finally emptied one side of the tumbler composter - it looks good stuff. I left some in to help with the next batch composting down. I had another plant delivery - buddleia sungold. It's for the top bed by the back fence. I had to dig up the wild marjoram, which wasn't easy as the roots were determined not to budge. I split it and moved it further to the right plus planted some cuttings for new plants. I dug a hole for the buddleia, put in a spadeful of the compost to give it a healthy start then gave it a good water as we haven't had any rain for over two weeks. I noticed the dahlias are still flowering so I picked a few together with verbena and brought them indoors to brighten the lounge.

Saturday -another warm day and rain forecast...we'll see. I part-tidied up the front garden, dug up a couple of plants (no idea what they were, don't remember planting them) as they were starting to take over and lightly pruned the miss ruby buddleia. Unfortunately, the front isn't very colourful at the moment. 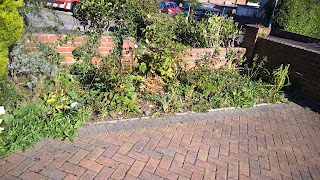 I collected seeds from the spent perennials and removed a load of bindweed. Next job was dig in the garden compost into the veg beds so hopefully the veg will be prolific and huge next year! I am conducting an experiment with a free pack of sweet pea floral tribute. I've sown half the pack straight into the propagator and the other half I'm going to soak overnight then sow and see which grows the best. I shifted some bits under cover in the pottering shed in case it does rain as the roof leaks.

The next job was...try and magpie and pigeon-proof the bird table yet again. This is the latest attempt, let's see if it works. 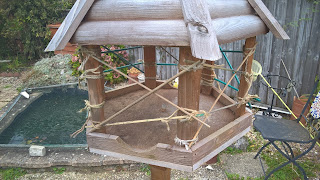 My weather app said it was going to rain at 3 o'clock. It started to rain at ten past. Impressed. And yippee! 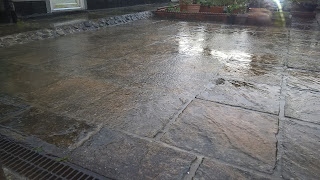 Followed a couple of hours later by sun and a brilliant double rainbow. The pics don't do it justice but trust me, it was superb. 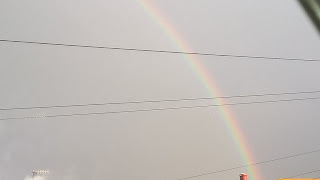 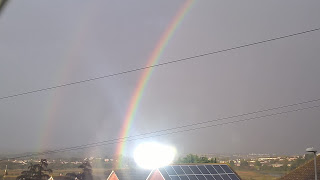 And then, this evening, there was another treat in store. The clouds cleared and an almost full Hunter's Moon (also a Super moon) appeared. It was spectacular (I'm running out of superlatives today) but trust me, it was. Bright and appearing to fill the sky.

Sunday - awake early so looked out over the garden before making a coffee and the treats just keep coming. Looking out to the west there was a break in the clouds and there was the moon again. What better start to the day. And tonight it's full so let's hope it's a clear night. I sowed the soaked sweet pea seeds in the propagator - the experiment begins. 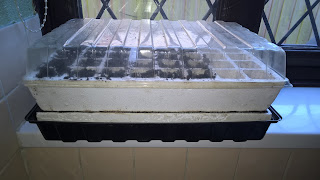 There were seeds left over so I've sown them in a couple of pots, put them in a plastic bag and they are in the greenhouse, another dimension to the experiment. I watched Gardeners' World and the only job relevant to me was to mulch the celeriac.

Well, that's it for this week. The weather looks pretty settled over the coming week, not too cold hopefully. Have a good week and catch up next Sunday.