It's been a pleasant week in the garden with still plenty to do. The weather has been sunny, warm, foggy, frosty and raining (although not all at once).

Monday - I forgot to mention last week that we - namely him indoors but I did hold the packet - put the grease bands around the fruit trees to stop insects crawling up the trunks and over-wintering in them. The bands are very sticky and they stuck to him as he attached them, so they should deter the insects. 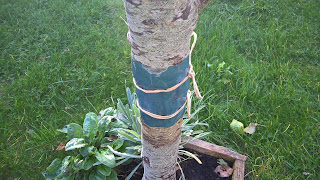 I lightly pruned the buddleias to stop them flowering, I'll prune them hard in the spring. I took hardwood cuttings of the lemon verbena, lavender and rosemary and a root cutting from the lovage. Once these have (hopefully) grown I'll plant them in the small strip of garden at the back of the greenhouse by the pond. The remainder of the daffodil bulbs are now in plus the iris reticulata and I've replanted some of the ground cover aubretia. I was watched for a while by a grey squirrel before it became bored and bounded off into next door's garden in search of better entertainment.

Tuesday - a red sky this morning and a layer of mist hanging over the RSPB reserve. I rescued a bee from indoors...they have the whole of the outside to fly around in, how come they manage to fly in through the small gap of an open window? I realised that I'd forgotten to plant the freesia bulbs. I've put most of them in a big pot in the greenhouse and there was enough let for two smaller pots indoors. I staked and tied up the sweet peas that are still growing ridiculously fast 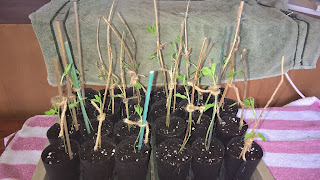 My sorting out of the string last week proved useful after all! I raked more leaves off the lawn, put dried mealworms on the bird table and picked these sweet peas that are still growing from the summer. 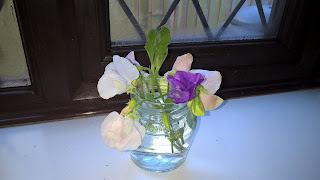 Wednesday - It's going to get colder again so I've put the lemon tree, lantana miss huff and the acer in the greenhouse. I've left the olive tree outside for the time being - it's doing well considering it was just a spindly stick 3 years ago 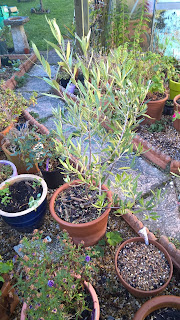 I sowed the wildflower seeds received from Kew Gardens for the grow wild project. The mealworms are still on the bird table which is strange as they are normally the first thing to go. Last job of the day was pick the leaves off the pond netting.

Thursday - frosty this morning out the back but not out the front. As I sat in the conservatory having breakfast one of our resident blue tits arrived and had a peek in it's nesting box. I noticed a blackbird fluttering around the bird table and realised that in my attempts to keep the magpies and pigeons off the, the blackbirds couldn't get on it either so I've taken down all my adjustments and it's back to the drawing board.

Friday - rain stopped play for most of the day but the fish enjoyed the refreshing of their pond. They are still eating well - three square meals a day. The seed I put on the bird table yesterday was still there, it appears the magpies and pigeons don't like it which is good to know.

Saturday - I had intended raking more leaves today but it was too windy (and cold in the north wind). I cleaned the small bird feeders, filled them with sunflower seeds and put more seed on the bird table. 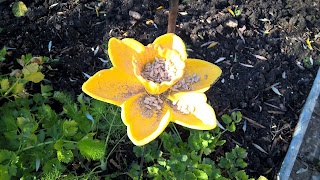 I lightly pruned the roses so they don't get blown around too much and damaged over the next couple of months and put in the winter aconites and anemone nemerosa robin bulbs. November 5th today and the fireworks started early, it was barely dark. Two squadrons of geese flew over on their flight path home, the fireworks seemed a bit too close.

Sunday - patchy frost this morning and we still have the cold north wind. I moved the sweet pea seedlings from him indoors' workshop to the greenhouse now it's colder, hopefully they'll go into semi-hibernation. I raked the lawn of leaves, 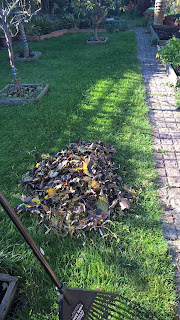 I've filled one bag, perforated and sealed it and put it by the top shed (him indoors take note!). I also spent ages getting the leaves off the pond netting and scooping them out of the pond 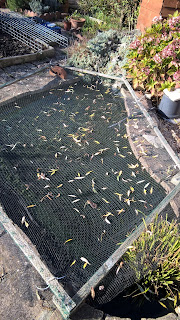 Despite the cold weather, there is still some colour in the garden, this gorgeous azalea 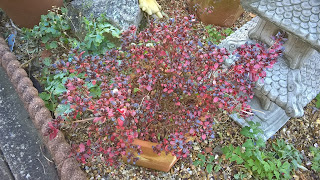 an antirrhinum growing amongst the pots 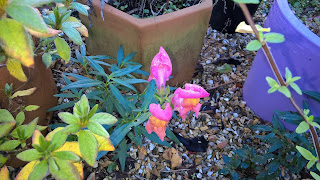 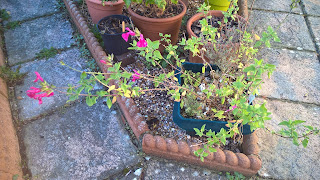 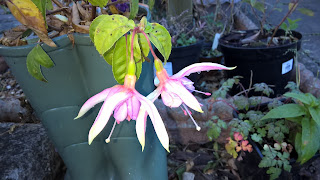 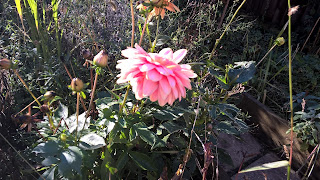 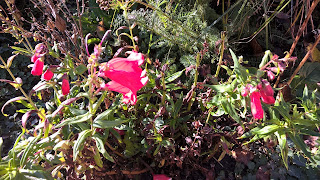 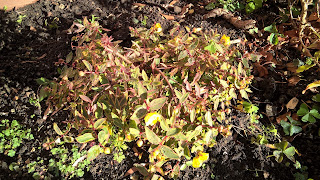 and the grasses are still looking spectacular 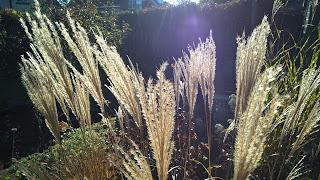 Well that's it for this week, the weather for the week ahead is cold and frosty overnight (going into minus temperatures), cold and windy by day...and rain. Those lazy, balmy days of summer are just a distant memory. Have a good week, stay warm and catch up next weekend.
Regards,
DD
Follow me on Twitter @DaisyDigga﻿
Posted by Daisy Digga at 10:52