An early blog this week as I'm working today. Unfortunately, I've not been able to get out in the garden much this week except to keep raking leaves from the lawn and clearing them off the pond. There's not many left to fall now. 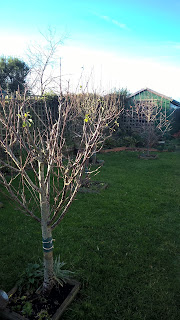 Monday - I topped up the bird feeders, fed the fish and checked all ok in the greenhouse. I pruned the newly growing sweet peas down to two sets of leaves. I was hoping to see the full supermoon this evening but it clouded over...typical.

Tuesday - but...the cloud cleared overnight and the supermoon was shining bright in the early morning sky 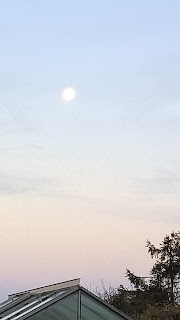 I know the pic doesn't do it justice, but it was amazing. I raked more leaves, cleared the pond again and fed the fish - some of them were already waiting. Then I picked more chillies, I think that's probably the last of them now. The hydrangea is looking even better, I wish it was this colour in the summer. 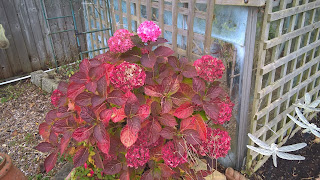 The shrubs I put in by the top shed are well established now and...the winter jasmine is finally flowering (it didn't flower last year) 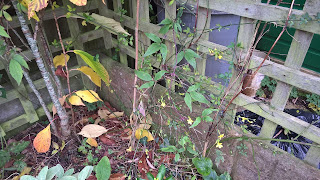 I'm going to train it across and through the trellis. I also took some cuttings. The little gem lettuce is soldiering on, the leaves have a stronger taste now than in the summer. 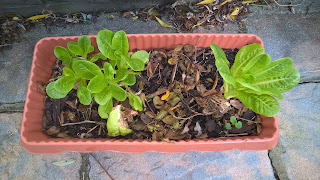 Wednesday - a sunny morning. Next door's tree looked spectacular with the early sun on it 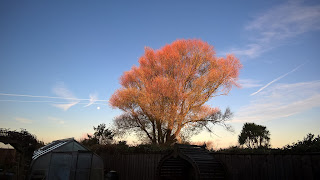 and the moon was bright again this morning.

I know this is not garden related, but here are pics of our bathroom at the moment 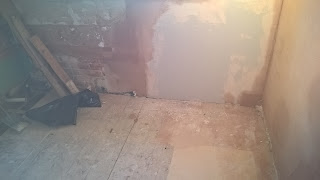 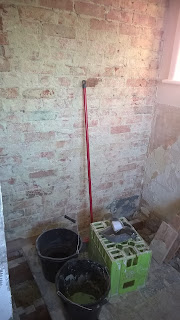 Luckily we have convenience facilities downstairs!

Friday - him indoors has replaced the door frame on the pottering shed as it was falling to bits. He says the door needs repairing/replacing as well. Ah well, there's always something. At least the roof no longer leaks. The fish haven't eaten for a couple of days, so him indoors scooped out the uneaten food so it doesn't rot and cleared more leaves.

Saturday - the day started sunny but clouded over. It's not as cold though. I fed the fish a small amount to see if they would eat but only a couple surfaced. I had a walk round the garden. The plants in the new bed by the greenhouse have taken. The cottage garden needs tidying and the perennials cutting back but the birds eat the seed heads so I'll leave that job for a while. Whilst I was looking at the cottage garden I noticed that the soil had been disturbed - and saw this 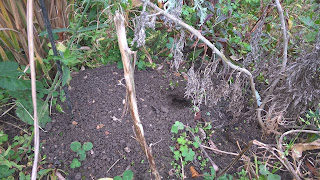 I wonder what's over-wintering in there - it's only a small hole. The wild flowers are coming through in the greenhouse 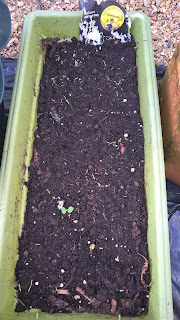 the onions in the trough are growing 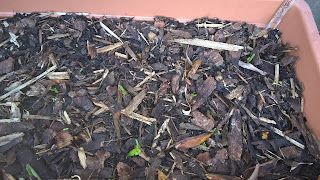 the blackcurrant sage is still in flower 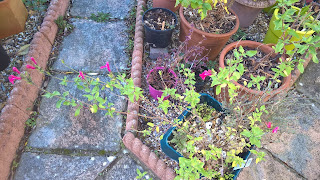 and a freesia is surfacing in one of the indoor pots 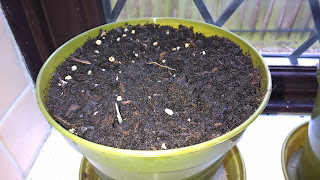 You know I said it's not as cold, well, by mid-afternoon the temperature dropped and it rained heavily for a while, including sleet. Storm Angus is on it's way overnight bringing more heavy rain and winds up to 65mph.
Sunday -well that was a wild night. Storm Angus arrived around 11pm, the rain sounded like someone throwing gravel at the windows. Much calmer this morning although still windy. The only damage I can see at the moment is a pane of glass missing from the front of the greenhouse which is weird because the wind was blowing side on. I had a closer look it and it isn't broken, it's just slipped down. It's on his list! The small shed door had been blown open as well.
Well that's it for this week, I'm off in search of a long, hot shower! Have a good week, stay warm and catch up next Sunday.
Regards,
DD
Follow me on Twitter @DaisyDigga﻿
Posted by Daisy Digga at 08:45