The week has gradually been getting colder here in Dorset and windy at times. It's also been a week without much gardening as other commitments have got in the way. The bathroom is nearly done and my quest for long hot showers was successful.

Monday - torrential rain on and off all day and it wasn't pleasant being caught in one of the showers. But the bonus was a double rainbow late afternoon. I took some pictures but I can't find them on my phone which is a shame because it was vivid and bright. The fish are enjoying a full pond of water and over a dozen came up to feed. The lodger in the cottage garden had been busy overnight and left all these seed heads at the entrance to the burrow 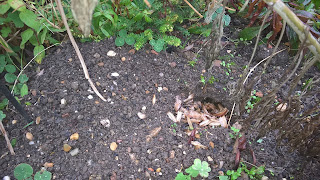 Him indoors has re-fixed the pane of glass in the greenhouse and adjusted the door to the pottering shed as it was sticking. Whilst he was sat in the conservatory pondering life the heron paid a visit, sitting on the top shed roof and staring into next door's pond. He said it was there for quite a while 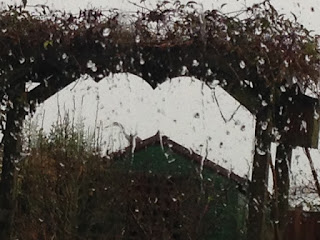 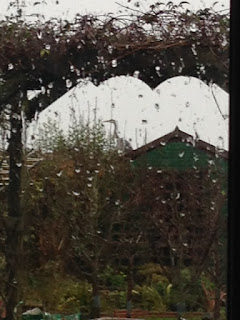 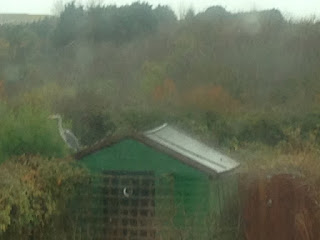 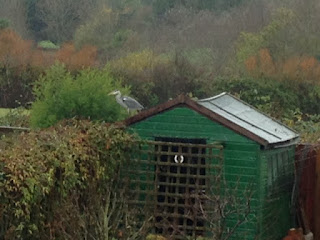 Tuesday - and still it rains. I looked up the lodger's burrow on the internet but still have no idea what it can be. The entrance is small and narrow and there are no footprints or droppings nearby. I checked to see if any of the plants in the greenhouse needed watering and noticed a puddle on the floor.
That's strange, I thought. When I looked up there was another pane of glass missing so one more job for him indoors. My viburnum x bodnantense dawn arrived today, 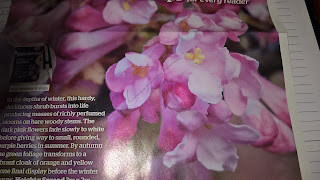 it has been potted up and put in the greenhouse. One of the lupin seeds has surfaced (bottom left) 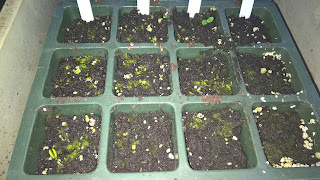 Wednesday - it has been suggested that the lodger could be a mole (I hope not and unlikely, I think) or another suggestion was a rat (really hope not!). I missed a plant delivery today, apparently. The courier had put a note through the door saying 'missed delivery' will try again tomorrow. Maybe if he/she had rung the doorbell.....

Thursday - I came home from work today and there were two boxes of plants waiting for me...at last. We emptied the boxes and stood the plants in seed trays and watered them - 6 prunella, 6 monarda fragrant, 1 cornus midwinter fire, 6 mixed tradescantia, 3 tricyrtis dark beauty, 3 tricyrtis latofolia, 3 tricyrtis hirta, 3 ascepsias syriaca, 3 meconopsis betonicifolia (blue poppies for him indoors), 3 festuca grasses, pennisetum red head, 3 gaultheria procumbens and a gardenia crown jewel. That'll keep me out of mischief next week planting those out 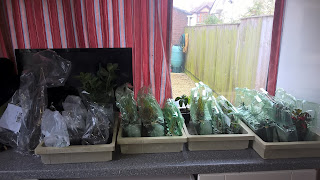 And yes, that is a television in the background in him indoors' workshop...it's a work in progress.

Sunday - a raw, cold day with the wind picking up in the afternoon. Amazing sunset last night by the way. I fed the fish this morning but they were lethargic about eating, probably too cold (the weather not the fish, although they might be). I checked the lodger's burrow but no sign of activity and still no footprints in the soil. The cottage garden is looking jaded and untidy but I'll leave it as long as I can before cutting it back. The grasses are still looking good. 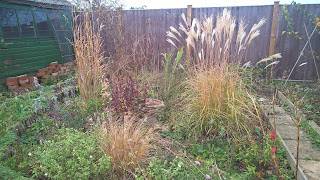 There is a little bit of colour in the garden 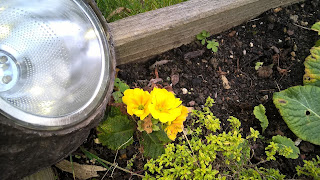 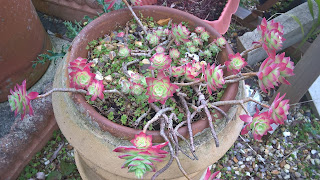 In the greenhouse the lupin has grown and opened up more 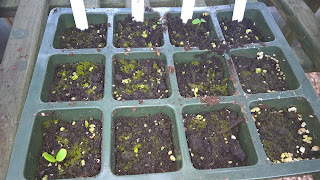 and the calendula seedlings and garlic are doing well 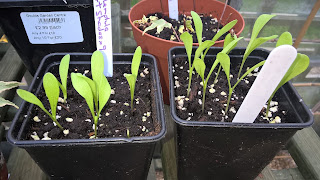 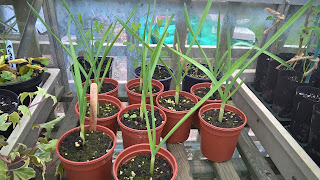 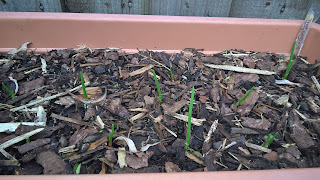 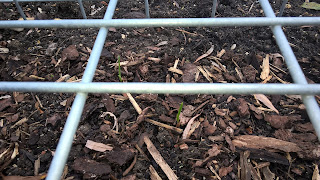 I watched the Countryfile weather this evening and it's going to be a cold but dry week with tomorrow night forecast to be the coldest so far this year. So stay warm, have a good week and catch up next Sunday.