Over the past two weeks we've had March winds and April showers - welcome to August. The weather has given the garden a spurt and coupled with a few days away it's a case of playing catch up. One thing I have noticed since we arrived back is that there are less small birds in the garden and more butterflies and bees. 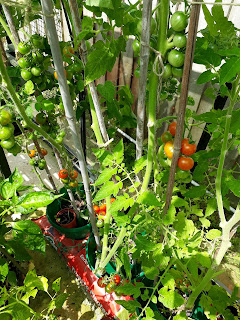 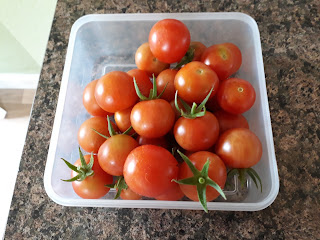 to date I've picked over 3lb. Next door have had some and there's some in the freezer. Still plenty left to pick.

Him indoors tried to get out the back to pick blackberries but this is all he could get. 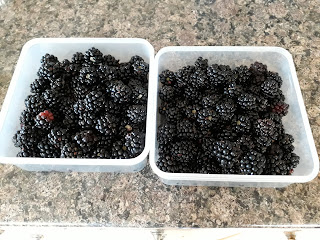 The bushes have grown right up to the fence and he couldn't get through. These are destined for crumble! Another harvest doing well is the peas but I think they are coming towards the end now. I'm disappointed with the pot grown runner and French beans. The packets said there would be an abundance...not so. I won't be growing these again. They look as if they should be doing well... 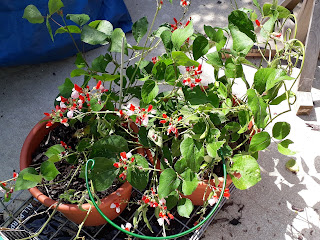 something's obviously lost in translation. I'm impressed with the carrots though. Not only have they grown well but for the first time the majority of them are straight...but not all! 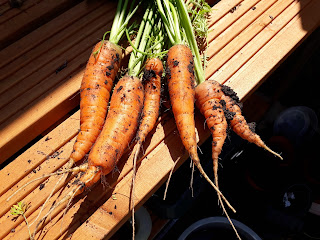 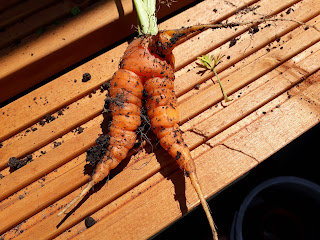 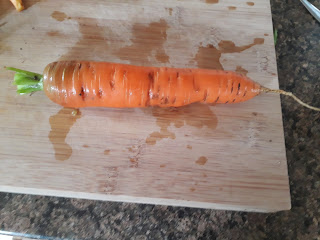 Him indoors mowed the lawn inbetween the showers, tied back the goji berry and cut back the intrusive rambling rose from next door that runs unchecked.

I dug up the last of the Duke of York spuds. This is the first time I've grown them, not a great yield but they make wonderful mash. Other disappointments compared to last year are the beetroot which refuse to grow this year and the cucumbers which are all flower and no fruit. There's only been one proper cue. These are the other two so far 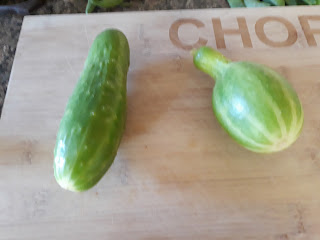 Last Thursday we had gale force winds which blew down the trellis by the greenhouse with the sweet peas growing up it. I tried putting it back up but the wind was too strong. I had been thinking that the sweet peas were past their best - it seems nature decided they were! I pulled them all out then staked 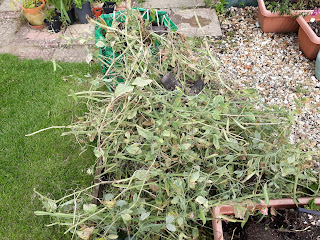 ﻿
up the other plants in the flower bed because the trellis had fallen on them, but it's looking ok. 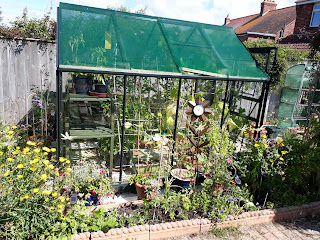 The previous week I was bringing in the emptied rubbish bin and saw what looked like a small pile of dog poo on the driveway (I didn't have my glasses on). I was puzzling as to how it got there when it started to move towards me! It was a small black toad, moving towards the electric garage door that was coming down. Thankfully it made it. I raised the door and left it open so the toad could get out. If it's one of the toads from our pond I'm wondering how it got out the front?? 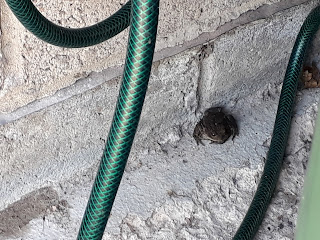 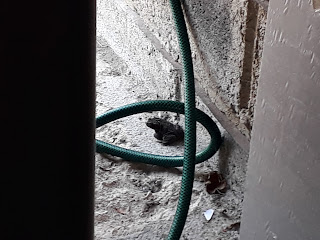 And then yesterday I was rearranging the planting and dug up an elephant hawk moth caterpillar. It's not small! Thankfully I didn't harm it and I scooped the earth back over it. I couldn't get a pic of it but this is what they look like. It was a good 5/6 inches below the surface. Amazing and actually quite cute, it looks like a miniature baby seal. 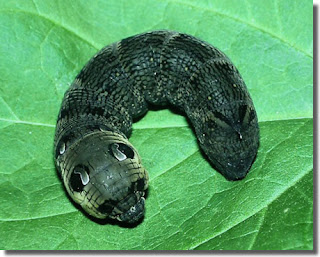 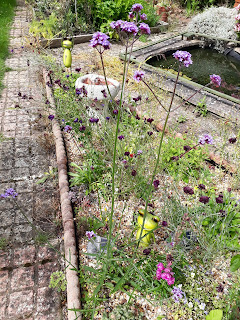 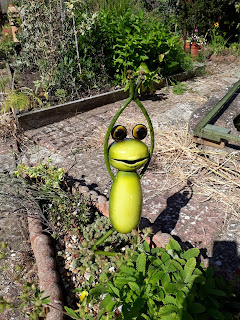 Yesterday would have been a warm day if it hadn't been for the north westerly wind. At 6.30pm the temperature outside was 18C 68F and in the greenhouse 27C 82F! There was a huge dragonfly flitting around the garden, it was the size of a small bird. The fish have been pleased we're back and being fed again, although I'm sure there's more than enough natural food in the pond for them. 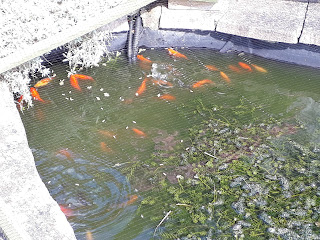 Well that's it for this week. It's been a much better day than forecast and I've spent a few hours tidying up. The forecast for the coming week is unsettled (their words) - doesn't look like much of the 'unsettled' is coming our way except maybe rain on Wednesday so it's back to watering the garden.
Hope the weather's good where you are, catch up next week.
Regards,
DD
Follow me on Twitter @DaisyDigga﻿
﻿
Posted by Daisy Digga at 18:42