It's been a record breaking week for April temperatures, reaching over 22C 72F and in the greenhouse on Friday at 6pm it was 36C 98F and that's with the sun diffuser covers on the roof. Late last night there was thunder rumbling around and flashes of lightning. I wanted it to rain hard as the soil has dried out this week but we only had ten minutes or so that didn't really do much good.

This week the blue tit has still been head-butting the greenhouse. I really don't know why it's doing it or what I can do to stop it because it's quite distressing seeing it. I've emailed the RSPB and still waiting for a reply.

I've moved the last of the pots out of the greenhouse into the sunshine, top-dressed them and gave them a good watering along with the other pots as the unexpected hot weather is drying everything out quickly. But it has brought more colour to the garden - we have an assortment of daffodils 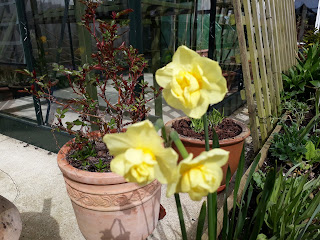 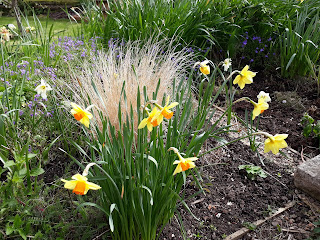 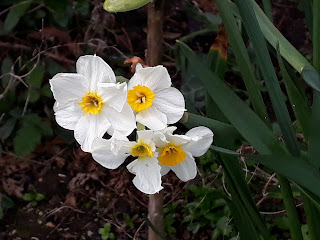 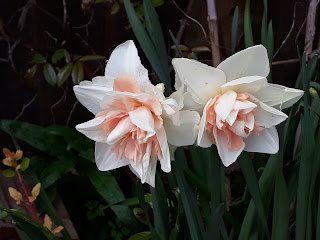 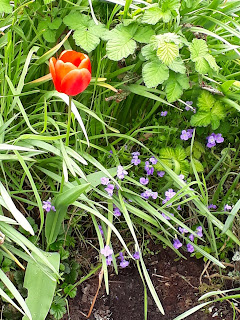 In the front garden the alyssum is looking splendid 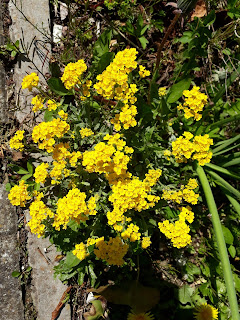 and the rockery is filling out 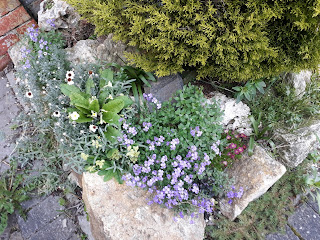 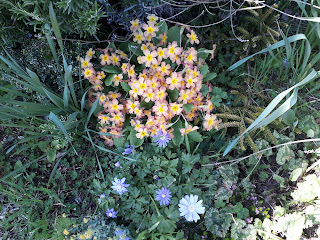 On Thursday some of the fish made an appearance, basking in the unusually high temperature. I fed them and it was a while before they moved but they did eat eventually. The pond is still rippling with tadpoles.

On Friday I planted the Pentland Javelin potatoes in the garden and the second early Charlottes in the green bags. I still have the Maris Piper main crop to put out. Yesterday I planted out some of the kale in between the onions so hopefully the pigeons won't eat them and also beetroot and radishes and surrounded them with organic slug deterrent. Saw this little beetle (?) on one of the plants by the side of the greenhouse 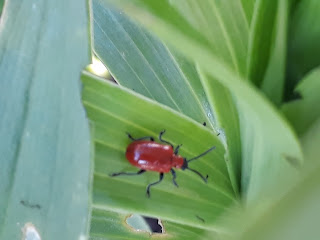 I sowed dwarf bean Stanley, dwarf runner bean Hestia, dwarf French bean opera, pea Ambassador, courgette Black Forest F1 hybrid and physalis alkekengi (Chinese lantern). I've put them in pots in the greenhouse as I am away next week and Mr and Mrs Digga senior will be looking after the garden and it's easier for watering.

The garden has been full of sparrows, blackbirds, robins, the blue tits, pigeons and a pair of collared doves. And talking of the collared doves, I went up the garden to take some photos and this little fella took absolutely no notice of me, walked past within inches, stopped, looked at me then just carried on. It looks like a chick 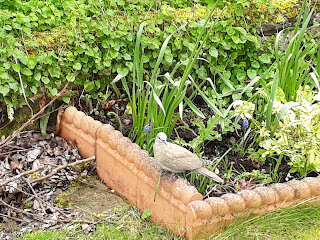 This morning woke up to fog and it didn't clear until mid afternoon. 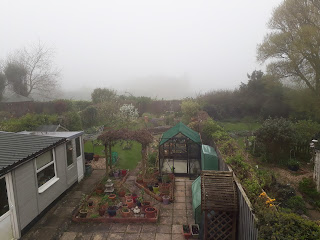 The cherry tree is now in bloom 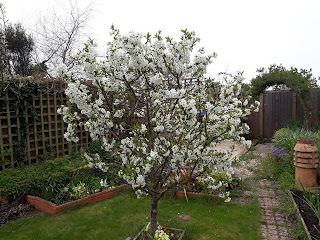 as is the ornamental cherry at the top of the garden 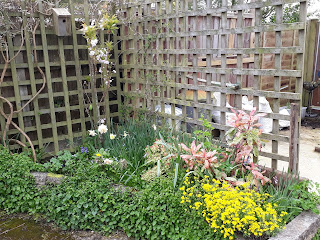 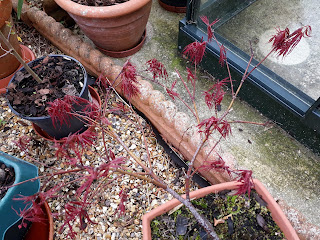 and in the greenhouse, some of the unknown seeds I've sown have started to grow so watch this space 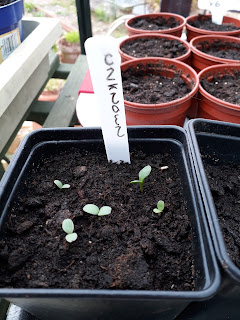 Well that's it for another week. According to the Countryfile weather it's going to be cooler this week but mainly dry although there could be a passing shower on Thursday - I hope so as the garden needs it. Have a good week and happy gardening.