Greetings from sunny Dorset. It was a chilly 6C 43F this morning but it's quite warm now in the sun. We've had some spectacular sunrises and sunsets and it's been quite balmy during the day. The temperature has been steadily dropping during the nights which has led to some early morning low lying fog 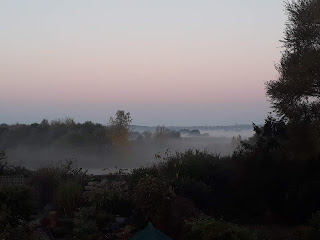 Yesterday we had much needed rain. The garden is still looking good although autumn is creeping in and the leaves are falling. The grass is growing again from the summer drought but it's all patchy and the ground is now uneven so him indoors will be sorting that out in the spring.

I've been clearing the leaves from the pond (to help keep the water healthy) and I've left the netting cover off a few times during the day because there are a lot of (huge - 5-6 inches long) blue dragonflies hovering around trying to get to the water. 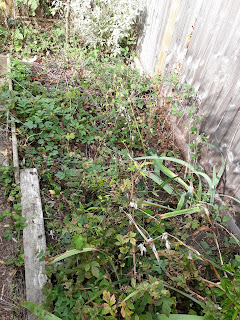 it still looks a bit of a mess but at least it's a pruned mess! I've given the quince tree it's first pruning 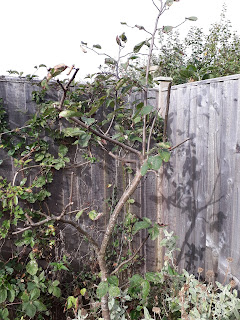 and cleared away all the stinging nettles and brambles that were growing round the base. I was going to prune the hazelnut tree but there are some fruits on it so I'll have to do it in the winter.

Today I've picked the last of the tomatoes and cut down the plants. I was going to do the same with the cucumber plants but they are still producing as are the padron peppers. I've put the lemon tree in the greenhouse because of the chilly nights. Not sure if these will develop into actual lemons but it's looking healthy 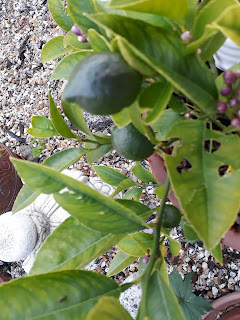 I need to put next year's onion and garlic crop in this month so I started to empty and dig over the veg beds. The beetroot haven't been brilliant this year 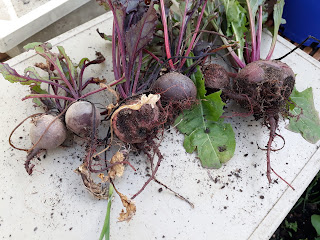 There are still some carrots left (straight and carrot-shaped!) 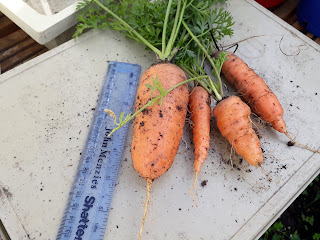 I will dig up the rest next week. The radishes have sort of run away with me, the large one is around 9 inches long 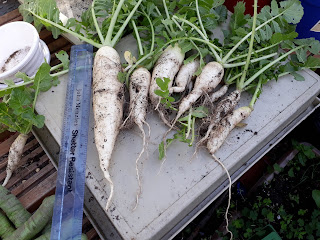 but unfortunately too woody to eat.

This is the time of year that we are advised to lift dahlia tubers for over-wintering. I've never done that, yet despite the freezing snap in March mine has survived and the yellow flowers are striking against the chocolate leaves 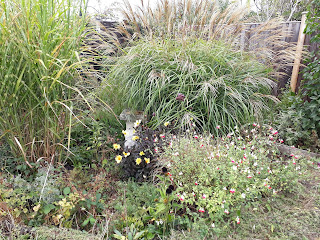 We have other colour in the garden - the sunflowers are persevering﻿ 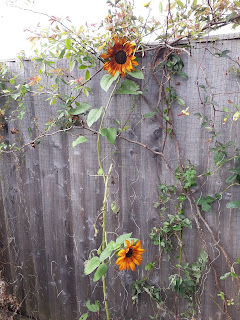 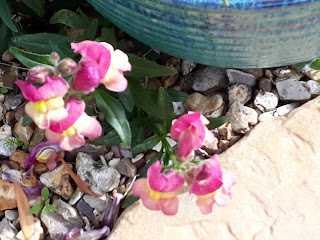 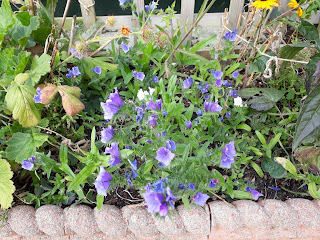 the geums are back in flower 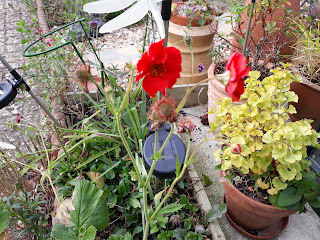 and I've not seen the dwarf lilac this colour before, it's usually shed it's leaves while they're still green 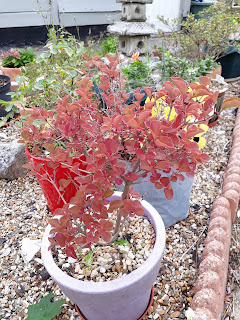 Red berries on a shrub that's peeking through from next door 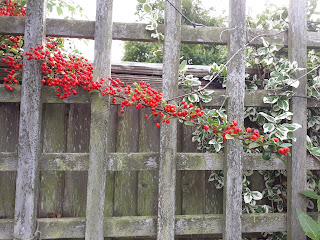 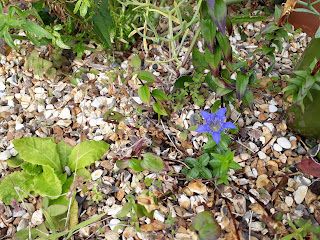 There is plenty to do over the next couple of weeks. The shading cover needs to come off the top of the greenhouse; I need to clean and disinfect the greenhouse when the cucumbers and peppers have finished; dig up the rest of the carrots; dig compost into the veg beds and plant the onions and garlic; put the tender pot plants in the greenhouse once I've cleaned it; clean the pots and trays for next spring and, of course, tidy up the pottering shed...oops! 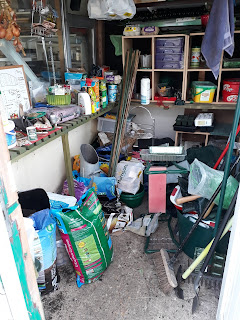 And this is the view down the garden from the kitchen 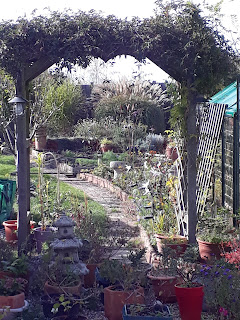 It's going to be another cold one tonight then it's going to warm up during the week with rain coming in towards the weekend. Happy gardening...