Well, the season to be jolly is nearly here. From a weather point of view it's definitely not a bleak mid-winter, snow is not falling all around us and, as you can see from the following pics, it's not just the holly and the ivy that are flourishing at the moment: 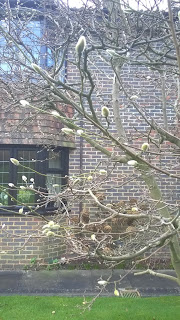 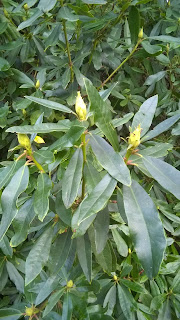 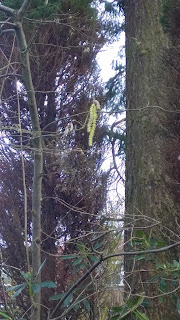 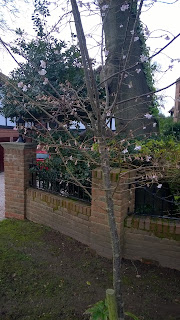 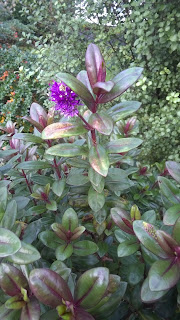 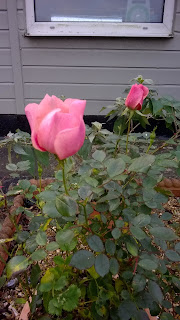 For Your Eyes Only rose

The temperature here in Dorset averaged 12 degrees last week. Today it has gone down to 10 but will be back up to 14 tomorrow apparently - no wonder the gardens and countryside are confused. Also, the grass needs cutting as soon as the ground dries out which could be a while as, just for a change, more rain and high winds are forecast for this week...so no white Christmas here then.

It's been a productive year and we are still enjoying the vegetables grown, plus we have homemade jams, chutneys and pickles to enjoy this Christmas...yum yum! 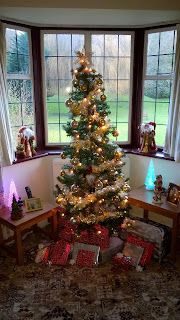 So, all that's left for me to say is have a fantastic Christmas and New Year and I look forward to catching up with you in 2016.

Sorry I'm a day late. Unfortunately I was working all weekend and, although it's hard to believe in these days of instant technology, it must be the only place on the planet that doesn't have access to Wi-Fi. Very frustrating and prehistoric. Anyway, on with the blog.

I had all good intentions of knuckling down and giving the garden a good tidy up but it just didn't happen thanks to the weather. I tried sweeping up the fallen leaves but it's been very windy again this week and as fast as I swept they blew away again. I did, however, get round to pruning the summer and autumn raspberries for the second time this autumn/winter. I also pruned the large hydrangea by the greenhouse down to the ground as buds were beginning to form again; I cut back the dying flowers on the hellebores, but left the leaves as shelter for hibernating creatures. And talking of hellebores, I think the plant with the green flowers growing in the shade garden (pic in last week's blog) is also a hellebore.

Earlier in the week the fish were not eating so I decided not to feed them for a couple of days. On Friday morning I fed them and they immediately appeared and ate it all with voracious relish!  They are getting bigger, not so much longer, but plumper. I have also been putting the pond pump on for a couple of hours a day when I'm here.

Wednesday was lovely and sunny (a much needed change) but I was unable to get in the garden because of work commitments. I did water the plants and cuttings in the greenhouse though.

For this time of year the garden is looking very healthy. Apart from the leafless fruit trees you wouldn't think this was a winter garden: 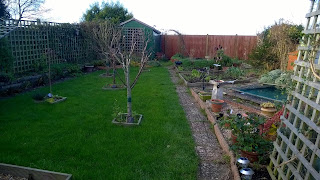 Today (Monday) started warm and humid. By mid morning it had turned chilly and windy and by mid afternoon it was pouring with rain again. The first thing I did when I arrived home from work this morning was feed the fish (hungry) and check the garden. Since last Friday the aubretia has started to flower, not easy to see in this pic unfortunately, 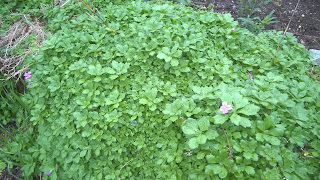 a couple of the daffodils have bloomed 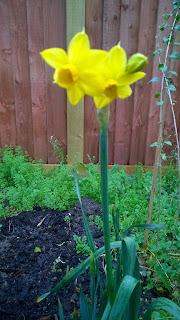 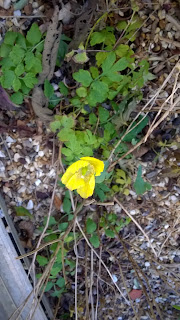 and more feathery tops to one of the grasses - very delicate. 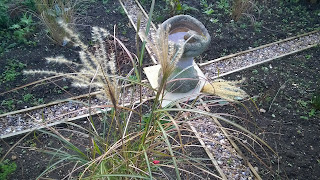 In the greenhouse the lemon is still growing 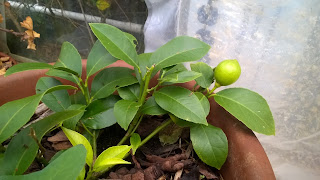 and the hot lips salvia and azalea cuttings are thriving. 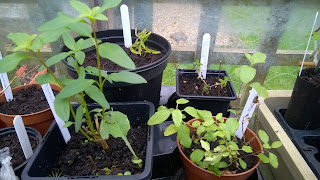 The carrots and borage are well established now and there are new buds on the blackcurrant bush.

There is still no sign of a stalk on the amaryllis, but the leaves are now between two and three feet long and growing! The underside of the leaves are speckley red and look like sticks of rhubarb! 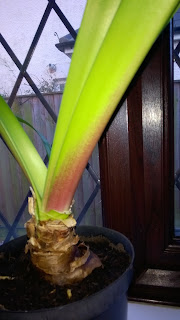 That's about it for this week. The forecast for us here in Dorset this week is rainy and mild with possible record temperatures being reached...watch this space. Have a good week juggling garden commitments and festive social activities!
Regards,
DD﻿
Posted by Daisy Digga at 18:38

It's been very mild again this week, a bit grey and murky...and windy. I didn't manage much time out in the garden at the beginning of the week but had a good day on Thursday. I dug in the remaining green manure that's shot up over the past week, planted the rest of the lily of the valley in the shade garden and, whilst I was planting them, I noticed this (no idea what it is) has come into flower: 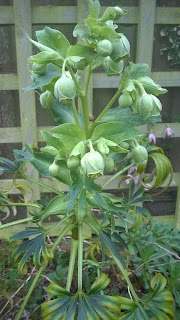 The sweat peas have gone crazy and were spreading over the other pots so I pinched out the tops and put in some stick supports: 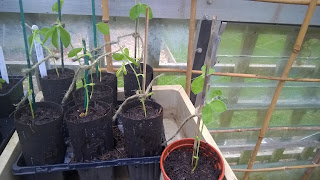 I then cut back the large dahlia in the cottage garden as buds were forming but rotting before they could bloom. I've left it in the ground and mulched to protect the tuber. I trimmed back the begonias, mulched them and put the pots in the greenhouse. And, finally, I've moved most of the ground cover plugs from their packaging in to pots and troughs for the winter; I will plant them in position in the Spring. I have labelled the ten varieties plus written the names and positions on a diagram in case the weather fades the labels...good thinking eh! I still have the giant alliums to plant somewhere...I need a bigger garden! The mixed alliums in the cottage garden have started to grow, some of them are about 6-8 inches high now.

As the weather has not been that great this week I decided to lavish tlc on some of the indoor plants. The winter jasmine was trimmed right back as, although it has new growth, most of the existing growth was brown and died away. I also trimmed the chrysanthemum and put in a support. A couple of stems broke off so I've potted them up and hopefully they will give me some new  plants. The old leaves on the kalanchoe had white dusty patches on the them so I've cut them all off and trimmed back the new growth. Both orchid plants are thriving although not in flower.

Sunday - today started with a spectacular sunrise, an abundance of pink everywhere; it made the garden look surreal. It has been incredibly windy this weekend although it started to calm down a little by this afternoon...Storm Desmond, apparently. Him indoors took the timer off the pond pump - we'll just turn it on and off manually throughout the winter. He also raised the pump slightly so it's not pumping out the warmer water at the bottom of the pond. I finally finished potting up the rest of the ground cover plugs for over wintering. I checked the others I had planted on Thursday and either a bird or a squirrel had uprooted a couple so I've re-planted them and moved the troughs nearer the greenhouse where hopefully they will be safe. And, at last, I put the giant allium bulbs in a trough so all done now. I dug up the remaining leeks, laid them on the veg bed and covered them with soil. Apparently, this is done because it's difficult to dig them up when the frosts come. Frost? What's that? It's been 12 degrees today! But it was a job for December, so I did it. I also dug up the rest of the fennel which is now stored in the fridge, and dead-headed the violas. Him indoors took all the composting material out to the big bin at the back of the garden and put some compost-maker pellets in to help it on it's way. He also put a bird bath in the cottage garden (family heirloom) which looks great: 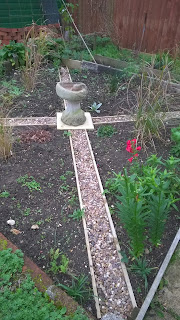 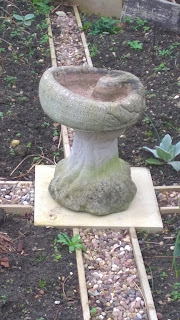 I made my weekly inspection of the garden, anyone would think it was Spring!. The aquilegia has started to sprout, 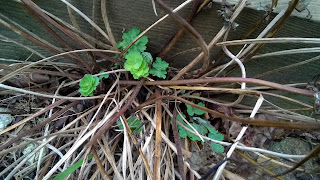 the delphinium black knight is in bud, 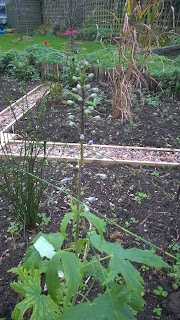 there are flowers on the rosemary, 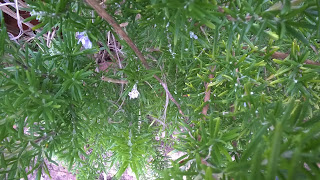 next door's rambling rose has rambled over into our garden and is in flower, 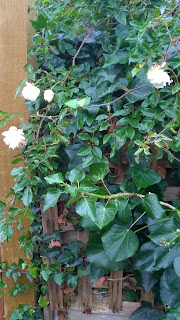 and so has their passion flower, bearing fruit: 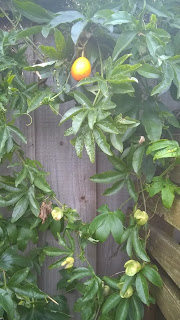 Towards the middle of the afternoon a fine mist appeared and by the end of the afternoon it was raining...again. And it doesn't look like there's much improvement next week for Dorset - mild, windy and rain although Wednesday and Friday look like they could be dry and, dare I say it, sunny!
Whatever the weather where you are, have a good week and catch up next Sunday.
Regards,
DD﻿
﻿
﻿
Posted by Daisy Digga at 20:29