Evening to you all,

The blue tit chicks have flown the nest. I was watching Springwatch Tuesday evening and they had a camera watching some chicks ready to fledge but they said it was probably too windy. Not for mine. Been blowing a hooley all week but they weren't deterred. I came back on Wednesday to silence, no chirping. Gone. I felt a little sad.

As for the frogs... As I said above, it has been unseasonably windy this week and on Tuesday two of the pond plants that are in pots had blown over. I reached in to set them upright and a mass of tadpoles and frogs scurried and fell out. I only had flip flops on and was thinking "please please please don't land on my feet!" Thursday was still windy but quite warm so I decided to sit at the table by the pond and have my lunch. Movement caught my eye and something small and black was wriggling on the path. A baby frog. It had launched itself out the pond and landed on it's back, hence the wriggling. Once upright it started to leap about on the path. Again, I only had flip flops on so beat a hasty retreat. It's not that I'm scared of them, it's the fact they move so fast you can't see where they land. I have thought about putting my wellies on but what if one leaps and lands in one...shudder!!!

Fred/Freda is back in the cauldron pond...quite cute. On the other hand, a frog has appeared in the big pond (well, not that big but big compared to the small pond!), or it could be a toad. It appeared from under a lily pad when I fed the fish that I don't seem to have at the moment. Later that day it was just 'hanging' in the water, all puffed up. It looked like a tennis ball with a head and legs. 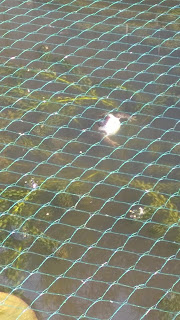 The Canada geese are back, they flew over in V formation on Friday and yesterday morning I saw a heron flying away from next door's garden.
The garden - still no sign of the fennel growing but the onions and leeks are doing well as are the runner beans and peas - this morning I saw 3 pea pods. I am hoping that the upcoming cold nights don't kill off some of my plantings, e.g. the courgettes and squash. I will have to put them in the greenhouse overnight. I have already put the outside gherkins in there as I've lost one and the other  two don't look too healthy. Beetroot, tomatoes and cucumbers doing well. I have potted up the cucamelon, they are small grape-like fruit that taste of melon and lime so the packet tells me...we'll see. Flowers on the strawberries but no fruit yet. Yesterday I planted out my cottage garden plants - geum, delphinium, corepsis and digitalis. I also spent over 3 hours clearing weeds.
Well, that's about it for this week. I'll leave you with Friday's sunset. 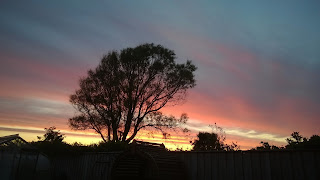