Firstly, apologies for the late arrival of my blog. We went to Edinburgh for a few days last week (had a fantastic time), arrived back late Friday evening and then I had to work all weekend. Not even had chance to watch Friday's Gardeners' World yet. Definitely missed jobs for the weekend, it'll have to be jobs for the weekdays instead.

Amazingly, there is still a lot going on in the garden at the moment and so plenty to do. On Monday we both had a good day clearing and tidying up. Him indoors scooped all the fallen leaves from the pond (yes, more) and adjusted the pump output. He also topped up the water level as it has been steadily dropping during the recent dry spell. He then adjusted the back gate making it easier for me to open, took out three containers of composting material to the back bin and raked it through. He also raked through the small compost bin near the back shed. The compost in one side of the tumbler composter is now ready (really quick composting, does exactly what it says on the tin!). I was going to empty that out but when I read the instructions it said the composted material can be left in the chamber as it will help break down new material, so I just filled it up again.

We put grease bands around the trunks of the fruit trees to prevent insects crawling up and damaging the trees over the winter. I say we, I mean him indoors as it looked, and was, a bit of a messy job. It was my idea though and I did advise where on the trunk to put the bands! We then decided to give the pear tree a good prune as last year's new growth had gone a bit wild over the summer. It's looking trim and compact now. Him indoors then vacuumed up all the fallen leaves (with his leaf collecting contraption not our vacuum cleaner) and emptied them into the big composting bin. We then watered the front and back gardens and I also watered the greenhouse. The lemon and olive trees only get watered once a month now. Am thinking maybe I've moved the pots into the greenhouse too early as it's getting mild again but, it's done now. The weed killer has not affected the weeds yet, as you can see. I may have to pull them up after all. 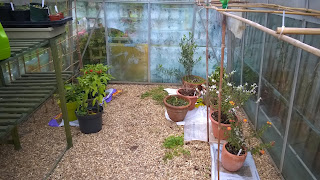 I then started to run out of steam so my last job of the day was to sow the sweet peas I'd soaked overnight, three to a pot. I covered the pots with a plastic bag and put them on the kitchen windowsill. The packet says they will germinate between 7-21 days. This is five days later: 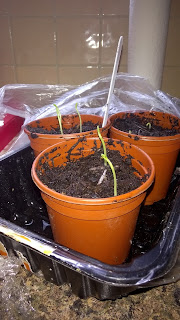 This week I'll have to re-pot them and they can overwinter in the greenhouse. I was going to tell you the name of them but I've torn it off the packet...oops! What is left advises that they have an intense fragrance and are a mixture of modern grandiflora varieties if that helps. I didn't get round to sowing the garlic, I'll hopefully do that this week. The amaryllis is also going from strength to strength (last year it grew to over 3 feet!): 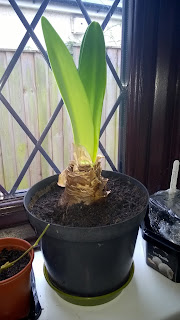 Saturday - whilst I was away earning a crust, him indoors carried on with tidying the garden. We were only away four days and the pond surface was once again covered in leaves and so was the lawn. After clearing the pond and adjusting the pump again (I don't understand why the flow keeps changing. Fish...what are you up to?), he then cleared the leaves from the lawn, gave it a high cut, aerated and raked it. It may need doing again before winter if this mild weather keeps up.

The pineapple sage I moved into the conservatory last week is definitely happy in it's new position as flowers have started to appear already: 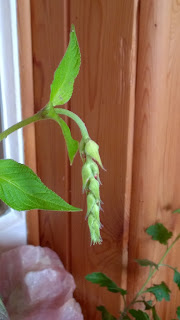 There are a few autumnal jobs that are on hold at the moment, one of them being the new dahlias. As I mentioned before, I am going to cut them back and leave in the ground covered in mulch this year. Last year I dug them up and they weren't successful this summer. Anyway, at the moment they are still in wonderful full flower, as are the echinacea, honeysuckle, begonias, geums and these hellebores, in full bloom for the second time this year. 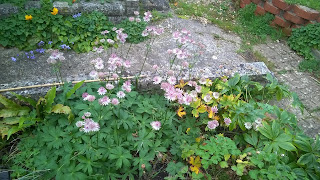 The primulas are coming on nicely: 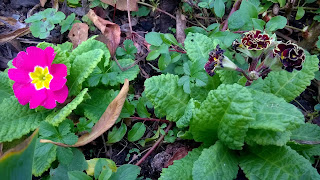 And newly flowering this week are this lovely fuchsia and what looks like a chrysanthemum: 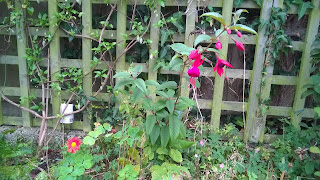 Well, that's about it for this week. Him indoors did ask a couple of weeks ago what I was going to write about during the winter when there's not much going on in the garden. Has he learned nothing?? Us girls always have something to talk about!

The full moon this week is the last Super Moon of 2015, it looked amazing last night. Have a great week, mixture of sun and showers here in Dorset but looks like it's staying mild. Happy gardening.