Well what a week it's been...warm and sunny and perfect for gardening. I hope the weather has been as kind where you are.

Monday - started damp and murky but warm at 53F 11C. Rain was forecast for 2pm and it started at 2.13pm - pretty impressed with that! Not much done today apart from feed the birds, tie up the clematis and check there was no slug damage. The potatoes that had frost damage last week appear to have recovered and are growing well.

Tuesday - a chilly night, the temperature only 48F 8C but it soon warmed up and we had a lovely spring day. I applied liquid feed to the courgettes, cucumbers, gherkins and tomato plants in the greenhouse, planted out beetroot and potted up next batch. I was in two minds about planting out as it could be another cold one tonight but they had been hardened off. I potted up the ragged robin (good for bees), rainbow beetroot and swiss chard, covered the tops of the maris peer that were poking through the soil - 3 hours later they had broken through again! I put coverings over all the potato bags just in case of a frost tonight. The runner bean seeds have finally started to break out and so have the outdoor gherkin.

Wednesday - even colder this morning at 43F 6C but it warmed quickly into a glorious day. I adjusted the bird table yet again as I saw a pigeon on it - this is turning into a battle of wills! 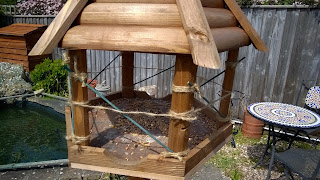 I sowed first sowing of fennel seeds and second sowing of Chinese leaves and chop suey greens; planted out celeriac that have been hardening off then spent three hours on the neglected front garden. I don't intentionally neglect it, it's just that the veg are so demanding! I weeded it, hoed between the plants then planted mixed verbascum I've grown from seed and moved the miniature buddleia and viburnum kilimanjaro shrubs from their holding pots. Also sowed the  'grow wild' seeds from Kew Gardens out the front. 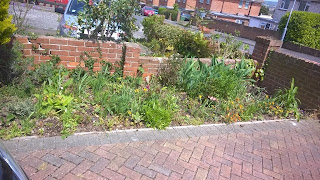 I know it doesn't look much at the moment but you should have seen it three hours earlier!
My final jobs for the day were to apply strong strength weed killer to the back garden pathways and water the cottage garden. Despite the adjustments to the bird table there were a couple of collared doves on it this evening, but I don't mind them. There was a bee in one of the potato bags: 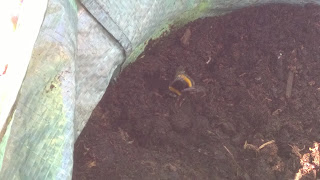 and the pond is looking good - it will look much better when the fish decide to appear again. 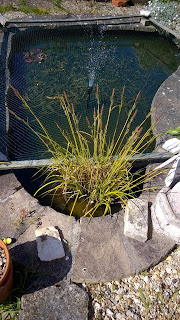 Thursday - back up to 48F 8C this morning and blossomed into a glorious - and busy - day. My first job was to move the bird seed feeder as one section of the cottage garden is being trampled into non-existence by the pigeons looking for the food the sparrows and blue tits throw at them. I have moved it to where plants are established for the time being. Once I'd moved the feeder I put ground cover plants in the cottage garden to make it look a bit greener. My intention is to eventually have it full of flowers so the weeds can't grow. Midday in the greenhouse it was 66F 19C. I made further adjustments to the bird table and so far so good, the pigeons can land on the edge but can't access the food. I watered the pots, fed the outdoor veg then put down lots of slug pellets. I have organic pellets and I also have crushed mussel shells which the slugs and snails won't like (although I enjoyed the contents with some white wine and garlic!). This evening there was a flurry of activity near the cottage garden, a troop of sparrows were going crazy swooping and diving, landing then flying off.

Friday - and it's getting better, 51F 10C sunny and clear skies. I went out early as usual to open the greenhouse and bring out the seedlings to harden off. The courgettes are doing exceptionally well, but one of the gherkins is flailing a bit - I struggle with them for some reason. I was checking the garden for traces of slugs as, apparently, they are massive and prolific this year due to the mild winter, and I saw what I initially thought was a bit of plastic on the soil then, when I looked closer, saw it was a slug trail...and culprit. 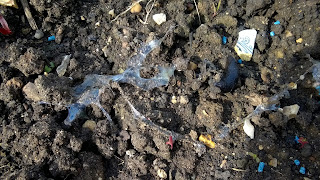 At midday it was 76F  24C in the greenhouse and there was a crane fly in there - I've only ever seen them in the autumn. I took the remaining polythene covering off the veg patch and planted out leeks and kale next to the celeriac.

The runner beans have come on in leaps and bounds with strong roots and have been potted up to harden off and I did a second sowing. 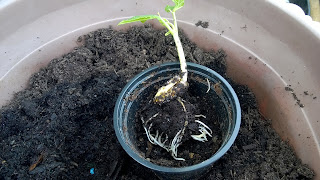 I also did a second sowing of gherkins in case I lose the first batch. I sowed broccoli and spinach leaf seeds although I wasn't going to as they always fail on me, so this is their last chance. Cleared the pond of algae and excess weed. Still no sign of life except for aquatic snails but there is definitely life in there as the surface of the pond ripples now and again plus there are air bubbles coming to the surface (unless there's miniature scuba divers in there!). Finally moved the lemon and olive trees out of the greenhouse.

Saturday - started at 53F 11C, humid with rain which cleared by mid morning to leave a warm but cloudy day, reaching 66F 19C in the greenhouse in the afternoon. I made some adjustments to the pea and runner bean frame so I can grow more up it, covered it in netting and tied bits of ribbon on so the birds don't fly into it. 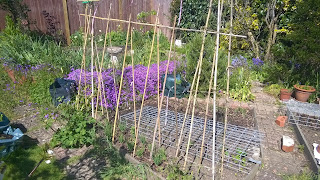 That was all I did as it took me a while to assemble. I was watched by a lone blackbird on the fence looking bedraggled and sorry for itself. It was also watching the sparrows and blue tits as if it wanted to join in and play...I felt quite sorry for it. 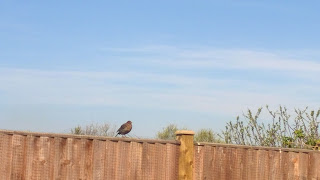 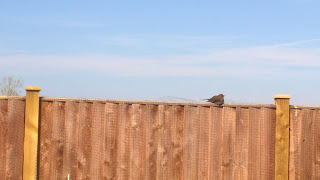 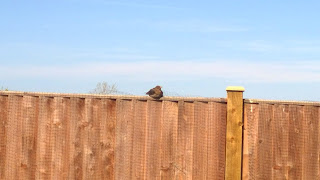 Not the clearest of pictures but I didn't want to scare it off.

Sunday - it rained overnight and again early this morning, a warm 58F 14C. It soon cleared and we had a warm, sunny day - even the breeze was warm. Clouded over and became windier towards the end of the afternoon. I put the tomatoes (with marigolds that deter white fly and aphids) in their final growing position 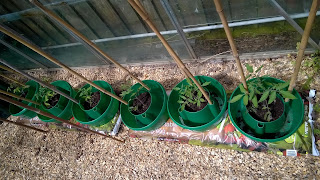 cleaned the cauldron pond of weed and algae, potted up the pak choi and little gem lettuce, sowed more marigolds then mowed the lawn. Normally it's him indoors' job but it was getting too long. His foot is nearly better...just as well as his list is growing as quick as the garden! I covered up the pentland javelin potatoes that had grown through and mixed in grass cuttings with the soil as it provides nutrients, so I read. The blue tits have been in and out of their nesting box most of the week and more activity today.

So, as you can see, it's been another busy week and very enjoyable. The second sowing of peas are breaking through 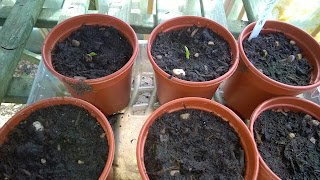 the watercress is coming on 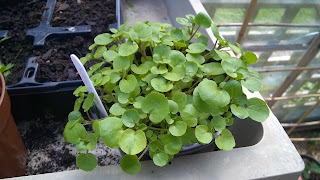 the borage is starting to flower - gorgeous blue, looks good against the silver curry plant and lavender 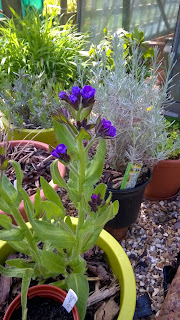 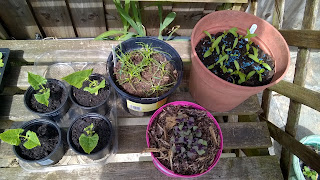 and a couple of views of the garden 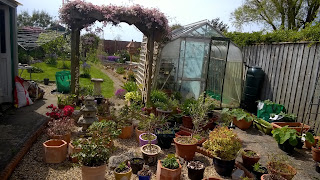 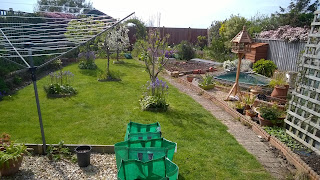 And just when you think you've done for the day a magpie decides to keep landing on the veg patch and trying to eat the kale and celeriac seedlings, so it was back out in the garden to hastily erect a deterrent...it's part of my new rustic collection hehe!! 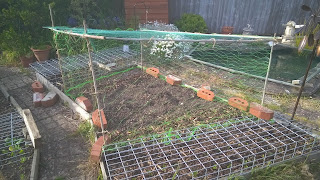 I missed the beginning of Countryfile but caught the weather for the week...rain Monday and Tuesday then becoming drier but colder. The garden will enjoy the rain anyway and I can get out in between the showers. Have a good gardening week and catch up next Sunday. 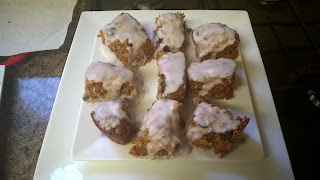