Summer came back mid week and the plants are getting confused. I'm not complaining though - it saves on the heating bills.

Monday - no gardening today as we had much needed rain, lots of it. The ground had a good soaking and the water butts are full again.

Tuesday - thick fog this morning, couldn't see the end of the garden. It cleared and left a gorgeous day (t-shirt weather in October) and at 2pm it was 78F 25.5C in the greenhouse...no wonder the plants and seedlings are baffled. Some birds have been eating off the bird table but not much has gone. I put suet pellets out to see if that will attract more but maybe not at the moment as it's unusually warm for October.

The fish are hungry and like their new food, it's gone in seconds. I've taken ivy cuttings which are in pots in the greenhouse. The greenhouse garlic is already showing 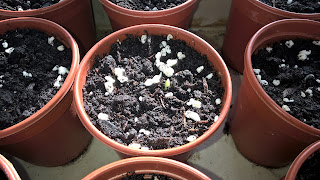 and I re-potted the sweet peas 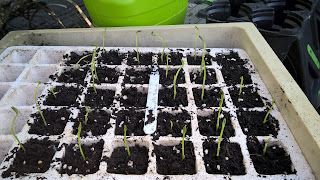 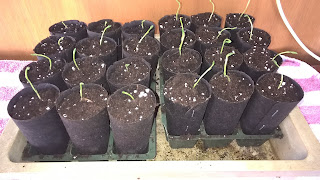 I've put them in him indoors' workshop as it's the coolest place. I planted more iris reticulate bulbs (free with plant order) underneath the fruit trees and around the miniature cauldron pond. There is still a problem with blackberry suckers where we had the new fence put in earlier this year so I doused the leaves with neat, extra-strength weed killer.

Wednesday - warm, humid and cloudy. I made a slight adjustment to the bird table to encourage the smaller birds. I was working today but I did manage to dig over the bed at the back of the greenhouse by the pond and dig in garden compost and coffee grounds.

Thursday - and another nondescript, muggy day. Him indoors carried on working through his list - he dug out more compost from the large bin, it's really good stuff. We both then worked on clearing the outside of the greenhouse of all the summer climbers. I was being watched - probably doing a time and motion study 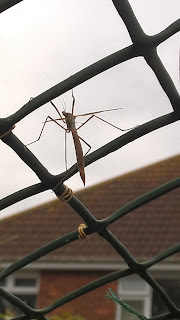 then him indoors cleaned out the gutters. It's looking much better 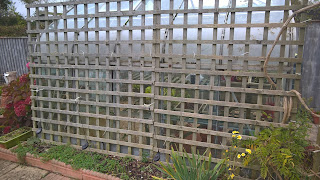 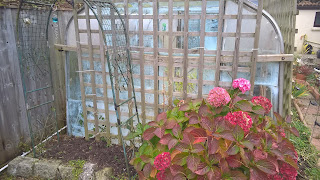 Now, I  think I've said this before, I don't like hydrangeas. In the summer this one is normally a nondescript pale pink but now the flowers have darkened and the leaves are turning burgundy I think it looks much better. After that we filled the large compost bin with garden waste (well, him indoors did), emptied the soil from the pots and troughs onto the garden and I dug it in while he loaded up the car for the recycling centre. Team work.

Friday - apart from feeding the fish there was no gardening as we were out all day.

Saturday - warm, humid and cloudy and looks set to stay that way for a few days. I noticed this lovely grass in the cottage garden in it's autumn colours 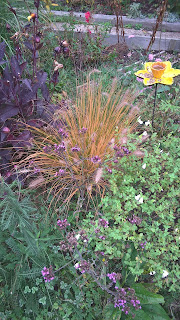 I am experimenting with seed sowing. I've sown a couple of trays of perennial seeds saved from the garden and I'll see if they grow now. If not I'll re-sow in the spring:- lupins, rudbeckia, dahlia (yellow), achillea yellow and summer berries, verbena and sunflower. Also sowed calendula 'art shades' from a free packet and ragged robin 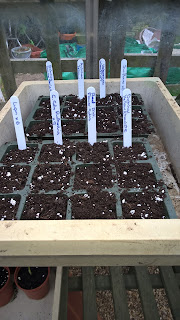 These are the greenhouse garlic which have come on better than the outside garlic. 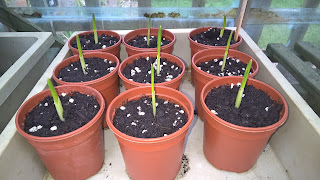 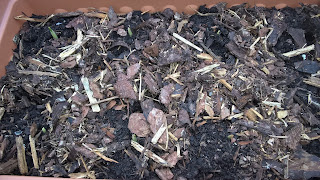 The greenhouse sweet peas are emerging 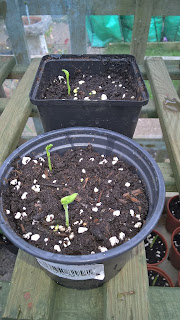 and...these are the propagated sweet peas that I potted up on Tuesday! 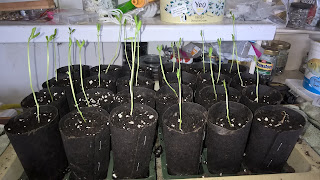 If we don't get some cold weather soon they'll be ready to plant out in a couple of weeks...how am I going to keep these in pots until the spring?? I picked the chillies that are ready, one of these is destined for the stir fry tonight. 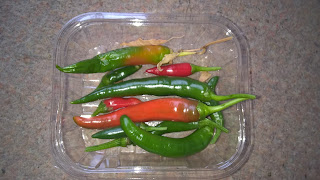 I dug over the side bed by the greenhouse and dug in some of the soil from the potato bags to loosen the clay then sprinkled coffee grounds on it. I then moved onto one of the veg gardens and dug in garden compost, potato soil and coffee grounds ready to plant the onions tomorrow. Last job of the day was to sort out the odd lengths of string that are reusable and are now put tidily away...yes, I know, get a life!

Sunday - misty and sunny early this morning then developed into a balmy, autumnal day which I've made the most of (and the extra hour). And before I forget, those chillies certainly pack a punch, that was one hot stir fry. The fish were waiting for their food this morning and, yet again, it was gone in seconds. The fishlings are a decent size now and starting to turn orange. I wiped the leaves of the lemon tree with a mild soap solution to remove pests like scale insects. I don't need to put it in the greenhouse yet as it's still mild. I put grit on top of the iris reticulate pot for drainage then cut down the raspberry canes. Next I raked the leaves off the lawn. I was going to do it yesterday but I ran out of time. Yesterday was calm, absolutely no wind. Today wasn't calm. The job took me twice as long as the leaves kept blowing away and more kept dropping off the trees, but it was quite therapeutic raking and it's good for the lawn. I've put the leaves in a black bin bag and aerated it. This time next year I will have quality leaf mould. That's the plan anyway. That's what I thought last year but him indoors threw it away thinking it was rubbish! 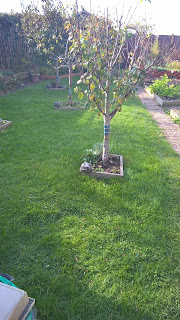 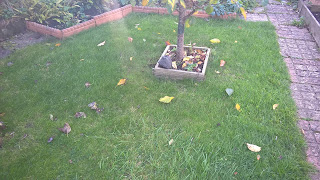 My final job of the day was to plant the onions. I've been putting this off for a week or so but, today's the day. I raked in more garden compost and levelled the surface. I planted 10 shallots (yellow moon) and 62 troy union white onions. I've mulched the area to keep in the moisture and to stop the birds pulling them out. This is the first time I've planted onions in the autumn. 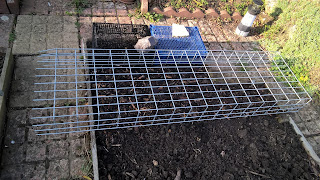 I've also planted a dozen or so troy union in a large trough to see how they grow. I'm becoming quite experimental.

That's it for this week, I'm pleased with what we've accomplished. I watched Countryfile and the weather for this week here in Dorset is getting cooler by midweek, maybe rain on Friday but before that we could have summer temperatures. Maybe I ought to stop planting and sowing, it's all going to be growing too early.

Have a good week, hope you have good gardening weather and catch up next Sunday.